Garth Rattray | The supremacy of our subculture 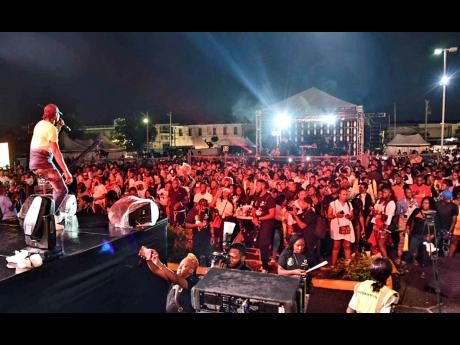 File
Dancehall music has grown exponentially because the background beat is easy to generate. Although the lyrics require much innovation and talent, it often draws inspiration from the hardships within our numerous inner cities.

Many years ago, a perspicacious friend of mine remarked that the culture of a nation is so important that it should be directed/guided and not simply left to seek its own path. In this setting, culture’ is defined as: “The arts and other manifestations of human intellectual achievement regarded collectively”, and, “The ideas, customs, and social behaviour of a particular people or society.”

Culture is a very interesting thing; it is both national and local at the same time. It may be so local that it is confined to a specific community. There can exist a Trench Town culture, a Beverly Hills culture, and a Portmore culture. Nuances in culture can translate into such differences that it can allow an observer to differentiate between them. A variant culture that develops within or under the influence of a more widespread culture is a subculture.

Culture is extremely interactive. It is spawned by the habits and behaviours of a people. That behaviour is often influenced by other (generational/inherited, external, or dominant) cultures. People influence the culture as much as the culture influences people. This is an important concept, and that is precisely why my friend made the statement that culture needs to be guided. If left to meander aimlessly under the temporary influence of the whims and habits of sects and groups with ulterior motives, culture can go awry.

Emergent cultures may easily, and sometimes seamlessly morph into one subculture or several subcultures. These various subcultures may be self-limiting and fade away over time. Other subcultures may endure but remain the lesser, non-dominant culture. However, a subculture may become so widely accepted, practised and inculcated that it subsumes the greater culture and becomes the dominant culture of a community or, indeed, of an entire nation. The changes may be so subtle that by the time a nation takes notice, the culture has undergone changes right under its nose. I avoided alluding to the ‘evolution’ of a subculture into a dominant culture because ‘evolution’ intimates a positive change, an improvement, and this is not necessarily the case.

Cultures may even coexist and achieve homeostasis. Our African heritage is made manifest in our uniquely Jamaican language, traditional dance, beliefs, social mores, day-to-day work techniques, and in all our forms of art and entertainment. There is cultural input from our Taino ancestry, Spanish and British infusion. During the days of slavery, ancestral cultures were suppressed in order to strip us of our sense of self-awareness, self-worth, and self-esteem. Without our ancestral roots to anchor us, we were adrift in an unfamiliar and hostile sea of European culture that never really sat well with us. Perhaps one of the first cultural unyoking events was the emergence of Rastafarianism. This religion sought to provide a badly needed, African-based religion. It spurned the farce that religion is primarily a Caucasian construct.

The other major cultural uprising was in the music industry. We invented Jamaican music, from ska to rock steady to reggae. All genres achieved international acceptance and acclaim, but reggae has taken the entire planet by storm, thanks to our musical geniuses and superstars. However, although reggae did not morph, it had an offshoot in the form of disc jockey (DJ) music. This, it is believed, strongly influenced the American rap music art form. DJ music also formed the basis for dancehall music.

Dancehall music has grown exponentially because the background beat is easy to generate. Although the lyrics require much innovation and talent, it often draws inspiration from the hardships within our numerous inner cities. Therefore, thanks to a society that has treated inner-city citizens like refuges, underserving of the same attention and care as our middle- and upper-class citizens, the material for dancehall lyrics is limitless. Unfortunately, those lyrics are heavily influenced by the poverty, suffering, hate, violence, carnage, and sex that permeate many inner-city environments. More importantly, many youth see dancehall music as a way to escape poverty.

Culture has cross linkages to the general behaviour of a nation, and our general behaviour reflects our culture. A look at our everyday interactions, and a mere glance at the absolutely horrid way that too many of us use our roads, will give you an insight into the negative aspect of our culture. Aggression, violence, selfishness, cruelty, and anarchy are all manifest on our streets. A loss of respect for life, corruption, cheating, and breaking the rules, in our bid to get ahead, tell us what we are rapidly becoming.

Outside nations have pirated our ‘culture’, kept it pure and profited significantly from it. This is particularly true of reggae. Now, we need to specify ‘Jamaican’ reggae because others have copied it and became proficient in it. Jamaicans do not own reggae, but we used to dominate it until dancehall came along and superseded it here at home. It’s no wonder that SOJA, a mostly Caucasian, Virginia-based reggae band won the 2022 Grammy award for Best Reggae Album.

It is sad that we experienced difficulty in finding worthy Festival Songs for our upcoming 60th Independence celebrations. I am not surprised, because small cultural disparities become hugely divergent over time. Things will only get worse if they are ignored. This is a wake-up call. Our culture represents the heart of our nation – our heart is broken.

Garth A. Rattray is a medical doctor with a family practice. Send feedback to columns@gleanerjm.com and garthrattray@gmail.com.