Peter Espeut | Reconciling with the Maroons 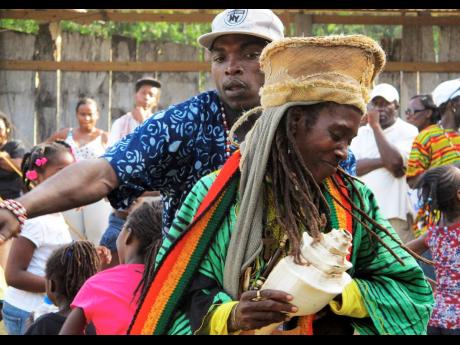 It was my honour and privilege to be the guest speaker at the 284th Annual Maroon Celebration at the Scott’s Hall Maroon Town in St Mary. Held on Emancipation Day each year, representatives from all Jamaica’s Maroon communities come together to...

It was my honour and privilege to be the guest speaker at the 284th Annual Maroon Celebration at the Scott’s Hall Maroon Town in St Mary. Held on Emancipation Day each year, representatives from all Jamaica’s Maroon communities come together to celebrate their proud history and to revel in their unique cultural heritage.

The place of the Leeward and Windward Maroons in Jamaica’s history is secure. Originally part of the Spanish resistance to the invading English army after 1655, swelled with numbers of runaway slaves they fought a successful guerilla war against the Jamaican colonial state. The armed forces arrayed against them were formidable: seasoned regular troops from the English and later the British army, supplemented by the Jamaican militia and companies of ‘Black Shot’ (armed African fighters).

They beat the British, who negotiated separate peace treaties with the Leeward and Windward Maroons in March and June 1739. And with that, Maroon history becomes controversial, for the treaty required Maroon forces to become a sort of Black Militia, co-opted into the Jamaican colonial state as bounty hunters – paid a cash reward for every runaway slave they captured. In addition, they were liable to be called up to defend challenges to British colonial authority. Maroon forces were responsible in large measure for the putting down of Tacky’s Rebellion in 1760, Sam Sharpe’s Rebellion in 1831/1832, and the Morant Bay Rebellion in 1865. It is not unreasonable to suggest that the Maroons have changed the course of Jamaican history.

While lauding the Maroons for their role as freedom fighters, I have been a fierce critic of their role supporting slavery and British colonialism. And this is why the invitation to speak earlier this week came as a pleasant surprise.

The theme the Scott’s Hall Maroons chose for this year’s celebration is ‘Facing the Reality of Resolving our Differences’, and I interpreted this as a positive effort by the Maroons to come to terms with their history.

On Good Friday earlier this year, paramount chieftainess and Queen of the Maroons Gaamang Gloria ‘Mama G’ Simms (based in the Charles Town Maroon community in Portland), the woman now occupying the seat once held by Queen Nanny of the Maroons, apologised for the sordid role the Maroons played in crushing popular anti-slavery uprisings and forcibly returning runaway slaves to slavery on the plantations.

Mama G declared ( inter alia), “We regret the hurt and sufferings caused from such actions. We take total responsibility on behalf of our ancestors … We realise that we cannot undo the past, but we can remedy the situations through reconciliatory actions that will repair the damage and rebuild trust so that these behaviours will not be repeated.”

My friend Mama G was there, and I congratulated her for her bold admission.

The only Maroon community that did not attend on Monday was Accompong Town in St Elizabeth. Colonel Wallace Sterling of the Moore Town Maroons, in his address to the celebration, lamented the disunity which had crept into the Maroon Federation. After my presentation, he took me aside and shared his discomfiture at the turn of events.

I have been close to the Charles Town Maroons since the days of the late Colonel Frank Lumsden; together in 2008 we watched Usain Bolt (on television) beat the field in Beijing. His successor – Colonel Marcia Douglas – who led a strong contingent to Scott’s Hall – gave a stirring address calling for Maroon unity.

Our gracious host – Colonel Lloyd Latibeaudiere of the Scott’s Hall Maroons – leads by example. On my first visit to Scott’s Hall earlier this year, I encountered him at the head of a crew cleaning the community graveyard in preparation for a ceremony honouring the ancestors. He led his organising team from the front. He made my wife and I welcome, and in his address to the assembly, he explained that, having signed the Treaty, the Maroons felt they had no alternative but to fulfil their obligations. He went on, supporting the theme of reconciliation and resolving differences.

Each Maroon group demonstrated their skill in drumming, dancing and singing, on occasion in traditional languages. Stage performances at Festival time by schoolchildren pale in comparison to the real thing. This aspect of Maroon culture is in no danger of dying, for the leaders of percussion, dance and song were young people.

Scott’s Hall invests in its youth. After the speeches, bursaries were given to a range of high school and university students – graduates of the Scott’s Hall Primary School – to assist with their education. These Maroons are not buried in the past; they look firmly to the future of their community and their nation.

The festivities began with the singing of the National Anthem of Jamaica. State within a state they may be, but they are in no doubt that they are Jamaicans.

The evils of imperial conquest, slavery and colonialism have tainted – maybe even corrupted – all those people and institutions with which they came into contact, including figures like Christopher Columbus, and the Maroons and various Christian denominations. In our zeal to reject those unsavoury parts of our history, we can overturn statues and vilify and condemn those who collaborated with that evil system – acceptable and legal at the time.

The Maroons of Jamaica provide us with a different approach. As Mama G says, we cannot undo the past, but we can examine it critically; and where our ancestors have erred, we can apologise, take responsibility, and seek reconciliation.

I believe that elements within the Maroon community are making efforts to confront the sordid aspects of their history, and to seek forgiveness and reconciliation. I, for one, am prepared to walk with them. They have a glorious history of courage and are examples of black liberation won through struggle; they deserve our understanding and our support.

Peter Espeut is a sociologist and development scientist. Send feedback to columns@gleanerjm.com