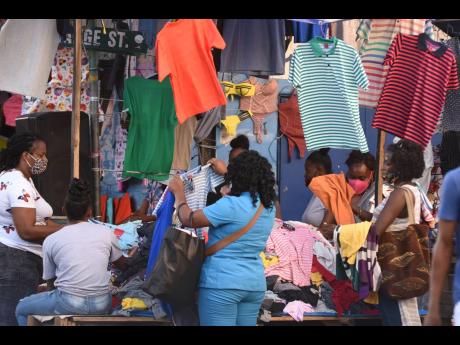 File
In this December 2021 photo shoppers are seen checking out clothes at Orange Street, downtown Kingston.

The gas station attendant hesitated then took a deep breath. “Can I ask you a favour?” Ashamed, her voice was barely audible.”What is it? You shouldn’t be asking for money if you are working,” was my gruff reply. “It’s OK then, but I was just...

The gas station attendant hesitated then took a deep breath. “Can I ask you a favour?” Ashamed, her voice was barely audible.”What is it? You shouldn’t be asking for money if you are working,” was my gruff reply. “It’s OK then, but I was just asking for a lunch money for the children.” “Where is their father?” I barked. “Fathers must give children lunch money, not strangers,” I intoned in my best preacher voice. Her face dropped. “He is not in the picture. Him and me no ‘deh’ anymore. Is me one and dem.”

Here she is Jamaica. Trying her hardest on minimum wage to care for three children, struggling mightily to make a family against all odds. This is the root cause. Pity the children. Let’s have a state of emergency against the normalisation of transient sexual relationships which produce children.

“Oh, stupid woman,” do I hear you say, “She should have used a condom or ‘dash weh the belly’. Again, as with every behavioural problem, we opt for repression and wilfully ignore root causes.

My girl tells me she really wants to be a nurse and maybe get a job abroad. Of course that’s out of the question now. All the pictures and stories of the feminist activists and the women making strides in the corporate world have no meaning for her. Working out her soul case and begging a lunch money for her children is her reality.

I have the deepest respect for single parents. They have the hardest and most sacred job in our society. Our collective fate is dependent on their success- not the operation of the firearms law or the stupid and dangerous proposal by powerful politicians that we should all arm ourselves against ourselves and expect harmony to be the outcome.

Every week now, there is the litany of revenge and reprisal of domestic discord and blood-letting, young people being the aggressors and victims in equal numbers and afterwards, always the mothers, mostly the mothers, fathers “not in the picture”, present in the moments of tragedy.

Does the inherent disorder matter to us? Clearly not enough. We bring up our young people with little or no expectation of faithful, exclusive relationships between woman and man. Promiscuity, enforced in slavery, is reinforced by a hedonistic culture and official ambivalence about family values. We treat loose relationships as an ingredient of freedom and are appalled at the consequences. Folly!

So my girl can’t make ends meet and sees no point in dragging her baby father to Family Court. The boys grow with maladjusted personalities about what manhood means, while the girls, undefended, become easy prey because they do not know how woman and man are supposed to treat each other. And parenting is bereft of joy.

Recent statistics from the United States affirm that a child who grows up in a two-parent family home, no matter how modest materially, is five times more likely to avoid deviance and a criminal lifestyle than someone raised without that protection.

It is an outrage that public discourse and policy centre around demeaning and destroying life rather than enhancing and incentivising the foundation of any possible good life, the human family. We are filling up our children’s heads with lies about what is valuable and failing to teach and sufficiently model for them friendship, faithfulness, commitment, trust and self-restraint. Without these, repression becomes the only means of sustaining social order.

When will we ever recognise these root causes of our national maladies?

Last week again, more of our political representatives are being hung out to dry by dissatisfied constituents. And as a sop, the prime minister says some more money is going to be “given” to MPs for drain cleaning. The debasement of the representative role continues.

So they are the ones to determine which drains get cleaned and which roads get fixed? Who signed up for that? What about the difficult responsibility of passing good laws for the benefit of all Jamaicans; incarnating a praxis of activity and hope to inspire a dispirited people; a pilgrimage that takes us beyond the semi-serfdom and clientilism of the present?

The honest MPs make huge sacrifices of money, health and family in return for a title and a front seat here and there, a mountain of suspicion and derision and are reduced to beggars and placators; pawns to bureaucrats and Cabinet “colleagues”. Many either become callous, or they hide, or bankrupt their pockets and consciences.

It cannot be beyond us to afford and manage a modest and honest social security system , beyond the ‘gjill and quattie’ NIS and PATH, helpful and inadequate as these are.

I have been out of representative office for two years now, but the daily, genuine requests for help continue as poverty, fuelled by our economic system and the sense of entitlement, natural child of how we practise politics, both increase.

The government prides itself on keeping the ship afloat despite the storms of COVID-19 and Ukraine and Ian, good. But the trouble is that the vessel Jamaica is like the Zong, afloat but with most of us beneath deck enduring a middle passage and in danger of being drowned in the river with the unfixable bridge between Manchester and Trelawny.

This is the season when next year’s budget begins to be crafted. If the resurrected Partnership Council were to busy itself not only with crime and garbage, but with profound thinking about national priorities and how we align budget expenditure with them, it would signal a big advance.

Suppose we just concentrated on efficiency and transformation in health, education and security for the next five years, then five per cent growth in four years would not be such a cruel mirage. Families would begin to prosper; my girl might get a reliable male partner and a career. MPs could gain focus. And the people would have hope.