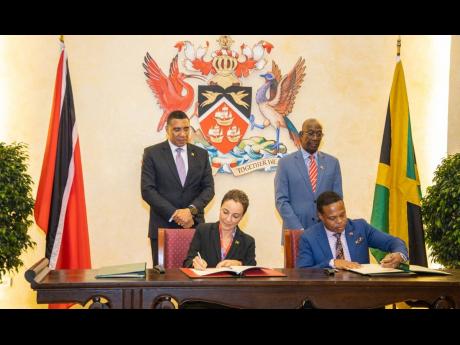 Contributed
Jamaica and Trinidad and Tobago signed an MOU in August aimed at providing companies in both countries with a transparent and predictable means of addressing export challenges.

Recently, I have noted that CARICOM member states have been signing bilateral Memoranda of Understanding (MOUs) to advance their economic cooperation within the Caribbean Community (CARICOM) and its Single Market and Economy (CSME).

The most recent one was between Jamaica and Trinidad and Tobago in August, which, it was said, is aimed at providing companies in both countries with a transparent and predictable means of addressing export challenges.

In May, Trinidad and Tobago and Guyana signed an MOU to address trade restrictions. They had signed an MOU on energy cooperation in 2018.

Also in May, Guyana and Antigua and Barbuda signed an MOU providing for economic cooperation in eight areas, including tourism, financial services, agriculture, air transportation, and energy.

In July, Barbados and Guyana signed an updated and augmented version of their Saint Barnabas Accord to promote bilateral dialogue in nine areas, including agriculture, aquaculture and food security; mining and quarrying; tourism and international transport; trade and business development; energy; manufacturing; and education. The St Barnabas Accord was first signed in October 2021. It was announced in September 2018 that Guyana and Barbados would sign an economic cooperation agreement.

In November 2021, the presidents of Guyana and Suriname entered into an economic cooperation agreement called the Strategic Dialogue and Co-operation Platform Agreement to link their two economies. It seems that Barbados was also party to this agreement. Guyana and Suriname also signed an MOU on the proposed construction of a bridge across the Corentyne River between the two countries.

An MOU is defined as an agreement between two or more parties outlined in a formal document. It is not legally binding, but signals the willingness of the parties to move forward on various matters.

CARICOM has a legally binding agreement, the Revised Treaty of Chaguramas, in which the member states have agreed to cooperate with each other and to establish the CSME, allowing free trade in goods and services within the region. This agreement includes a dispute-settlement mechanism to resolve trade and other disagreements related to its implementation.

Given the existence of the Revised Treaty of Chaguaramas, a question has been raised about this more recent trend of entering into non-binding MOUs among CARICOM member states to advance bilateral cooperation. Are these MOUs compatible with the Revised Treaty, and what do they mean for the other CARICOM members states who are not party to them, especially if they relate to intra-regional trade?

I do note that there is a bilateral treaty for cooperation between France and Germany, which are members of the European Union. So, it may not be so unusual for there to be bilateral or plurilateral (more than two countries) agreements among members of a regional integration process.

I assume that, in CARICOM, the necessary legal advice was provided at the national and regional levels about these intra-regional MOUs and agreements, and that they have notified the CARICOM Council for Trade and Economic Development (COTED) for transparency.

As these MOUs are non-binding, I sincerely hope that they will be honoured and other CARICOM member states will benefit from the improved trade arrangements, taking account of Article 7 on Non-Discrimination and Article 8 on Most Favoured Nation (MFN) Treatment of the Revised Treaty.

If not, to resolve intractable trade disputes, recall that the Revised Treaty of Chaguaramas has chapter 9 on dispute settlement and, maybe, the time has come to review the issue of enforcement.

These MOUs on trade could well be quite ineffective, but let us see.

Elizabeth Morgan is a specialist in international trade policy and international politics. Email feedback to columns@gleanerjm.com.