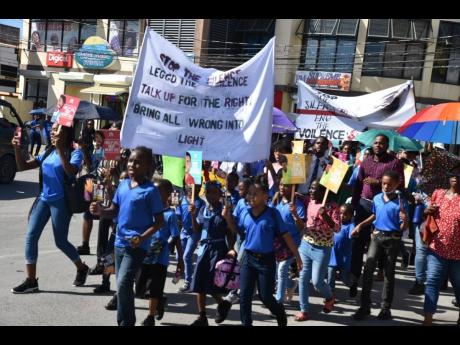 Herbert McKenis/Photographer
Students from schools in Westmoreland march against abuse and violence being committed against minors as part of a campaign led.by the Child Protection and Family Services Agency. The march took place in Savanna-la-Mar on Friday.

On November 25 each year, the global community commemorates the International Day for the Elimination of Violence against Women. The date also signifies the beginning of 16 days of activism to end gender-based violence (GBV) and concludes on December 10, Human Rights Day. The United Nations has stated that one in three women will experience abuse in their lifetime, which makes GBV one of the most systemic and widespread human-rights violations globally. Furthermore, it is widely acknowledged that there is serious under-reporting by victims; and in conflict settings, sexual violence against women and girls is significantly higher.

Starting tomorrow, and during the next 16 days, the global community seeks to heighten awareness of violations of the rights of women and girls; mobilise society to become activists for the prevention of violence; promote opportunities for discussions on challenges and solutions; as well as stand in solidarity with women’s rights activists. The elimination of GBV is a key pillar of the UK’s engagement globally as we seek to provide women and girls with the freedom they need to succeed, including unlocking their full potential, educating girls, supporting their empowerment, and protecting them against violence.

Jamaica continues to be plagued by high levels of crime and violence. This has resulted in extreme rates of violence against women, with Jamaica’s rate of GBV among the highest globally. I have seen the persistent reports on the high levels of violent crime, including the many vicious attacks against women. While young males between the ages of 15 and 24 are the main victims and perpetrators of homicides and physical violence, women are the main victims of sexual violence, much of which goes unreported. Just this year, there has been a spate of horrific and brutal murders of women. The Jamaica Women’s Health Survey 2016 (the first comprehensive report on the prevalence of violence against women in Jamaica) reveals that 39 per cent of women surveyed have experienced some form of violence (physical, sexual, psychological harm) at least once in their lifetime. Surveys by UNICEF locally revealed that one in five adolescent girls age 15-19 reported having experienced sexual violence. Emerging online threats to girls, the effects of the COVID-19 pandemic, and recent reports of violence in schools suggest that the risks might be escalating. The immense economic costs are also both direct and indirect.

The statistics are alarming, but indifference and inaction on our part would be more alarming.

Without addressing the fundamental causes of violence, the high level of GBV in Jamaica is unlikely to change. Since 2015, the UK has pioneered significant research and supported innovative approaches in a number of contexts through our ‘What Works to Prevent Violence Programme’, which has delivered reductions in violence levels. In 2021, we launched efforts to respond to the urgent needs globally to scale up successful, evidence-based prevention efforts to drive impact at scale. The UK, through its support to Jamaica, will take a holistic approach to violence prevention to support efforts by the Government to address some of the root causes, promote institutional reforms, and strengthen delivery of services to vulnerable groups and communities. Our engagement recognises the critical role of women as change agents, especially in influencing the highly damaging social and cultural norms, which tolerate violence. The engagement of women is especially important in the Jamaican context, given their strong leadership roles at several levels, including within families, the public sector, political parties, schools, churches, and communities. This approach will exchange the lessons and evidence of ‘What Works’, as we support partnerships across government, the private sector and civil society.

Of course, GBV does not only affect women and girls – it affects society as a whole, including men and boys - both directly as survivors, and also when exposed though the cycle of violence, especially in the home. It is for this reason that positive role models are essential, particularly in schools, communities and other social spaces. Every case of domestic abuse should be taken seriously, and each individual given access to the support they need. All victims should be able to access appropriate support, and all segments of society must be included in conversations and efforts to prevent and respond to GBV.

Violence against women and girls is a global epidemic, but it is also preventable. I want to recognise and applaud the work of local activists engaged in defending and promoting women’s rights across Jamaica. There is still a long way to go, but the UK is committed to ending violence in all its forms and remains a reliable partner in supporting advocacy, heightening awareness about GBV, and defending the rights of women and girls everywhere. Together, we can conquer this global challenge, enabling women and girls to fulfil their potential and live their dreams.

- Judith Slater is the British high commissioner to Jamaica. Send feedback to columns@gleanerjm.com.