Tony Deyal | Jack in the box and breaches 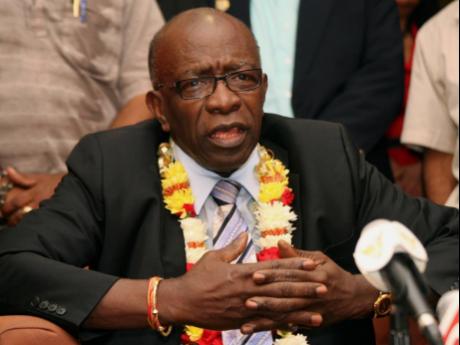 AP/ File
In this June 2011 photo, suspended FIFA executive Jack Warner gestures during a news conference at the airport in Port-of-Spain, Trinidad and Tobago.

Anything that is ‘in the cards’ is extremely likely to happen. In Trinidad, there is an English card game called ‘All Fours’ which goes back to the 17th century and, like Nostradamus, predicted some major recent global events. The most startling...

Anything that is ‘in the cards’ is extremely likely to happen. In Trinidad, there is an English card game called ‘All Fours’ which goes back to the 17th century and, like Nostradamus, predicted some major recent global events. The most startling is that a key point in All Fours, ‘Trump and follow suit’, came alive in the US in 2017 when Donald Trump became president and everyone seemed to follow and even worship him. Then another ‘All Fours’ prophecy struck. Trump lost the election in 2020 and even his most hard-boiled hangers-on are shouting, “Down to Trump.” Now, ‘All Fours’ is back with a vengeance. Instead of the familiar ‘High, Low, Jack, Game’, the points are increasingly for ‘High, Low, Hang Jack, Game’.

Who is this Jack? Is he ‘Jack the nimble, Jack the quick’ who jumped over the candlestick? Or is he the Jack who jumped high, then jumped low, and finally ended up burning his toe? Is he the Jack who walks a very thin line? The one where too much work and no play, or too much play and no work, ends with the same outcome - Jack is a dull boy, regardless. Then there is Little Jack Horner who had the ability to stick in his thumb and pull out a plum. Did he grow up from a boy to a Horner Man and still has that prowess? Would that cause him to end up with a broken crown? There are others like the sailor, Jack Tar, or someone who is a ‘Jack of all trades and master of none’. The one I am thinking about is a Jack of all tirades (especially “Ask your mother!”) and a master of cons.

So, if you see a man with his head stuck under a car while trying to hide from the police, you can call him ‘Jack’. However, whatever you decide, just don’t go to the airport when Jack is taking his final flight there. If you do, please don’t hail him out with, “Hi Jack!” otherwise you might end up in trouble, almost as bad as the one who is accused of getting most of what he wanted, or owned, by hook or by crook. The question, now that the Privy Council has condemned him to the US, is, “Will he continue to be the Jack Hammer that he was, or would it be a case of Jack Hammered?”

By now you should have worked out that I am referring to the situation of Jack Warner, former government minister of national security, and a sometime as well as ‘sometimish’ acting prime minister of Trinidad and Tobago (T&T). He was, simultaneously for much of that time, vice-president of FIFA (Fédération Internationale de Football Association) and president of CONCACAF (Confederation of North, Central America and Caribbean Association Football), until his suspension and eventual resignation from these roles in 2011. Interestingly, when the Privy Council ruled that Warner could be extradited to the US to face corruption charges, the prime minister of Trinidad, Dr Keith Rowley, made it clear that he always knew that Warner and his FIFA connection “could and would be an embarrassment to T&T”.

As usual, as soon as the media highlighted the prime minister’s long-held concern about Warner, one of my colleagues called me and asked, “Wasn’t Darryl Smith a ‘Warner-be’ and the prime minister made him a minister and then did the right thing of firing him, but for the wrong reason?” This was hotter to handle than the issue of dog meat during the Korean football World Cup in 2002 when the Koreans refused to change their menu and Warner, normally dogmatic in his views as the dogsbody of regional football, and known for his dogged determination and doglike support for his boss, Sepp Blatter, found himself in the doghouse. My answer was that it was as difficult for the present PM to deal with Mr Smith’s sexual harassment without his ship sinking as it was impossible for his predecessor to take action against Jack, despite the attempts of her ministers to warn ’er. This unfortunately did not end the discussion. My friend then asked, “So what you think? He will get away with a slap on his wrist or will he make a jail?”

I explained to my friend that the US government is not as lackadaisical as the previous government and FIFA were jackadaisical. One of my memories about the great ‘Warner-be’ was when a Facebook cartoon had Jack in a cell wearing the characteristic orange-coloured ‘jumpsuit’ that is the prison uniform in the US. The caption was, ‘Orange is the new Jack’. Then, when Jack threatened that the gloves were off, the response was, “That is so they could put on the handcuffs easier.” Finally, when Jack appeared in court to hear eight counts of fraud but had to spend a night in the cells before his US$395,000 bail could be processed, he claimed that the ordeal had made him stronger. The cynical response was, “If one night in prison made him stronger, when he finishes his sentence in the US he will be Superman.”

In some ways, despite all he is accused of doing, there are people who treat Jack with the respect and reverence that Trump still gets. The Trinidad Guardian says that Jack “remains a charismatic figure and is still popular with the grassroots people and the common man throughout the country and in his former Chaguanas West constituency where he was MP”. To them, he remains “Uncle Jack”. I was not surprised. In almost 30 years of going around the Caribbean, I have never seen any politician lose an election or make a jail for ‘thiefing’. Trinidad is the worst of all. Had Sir Allen Stanford chosen Trinidad for his base, he would not have been in jail. In fact, he would be the West Indies representative to the ICC (International Cricket Council).

The fact is Caribbean people love a talker and, despite his speech defect, people admiringly said of Jack, “The man could talk, boy!” Jack is a natural platform speaker. Lost in the flow of words, wrapped up in the semi-staccato, slightly stuttering outpourings of revelation after revelation, fact and fiction inseparable, Jack is like Trump to the point that many Trinis still lap him up like hot doubles on a cold morning. Most and worst of all is his ability to create a convenient diversion when he is put under pressure. Pestered by a journalist or anyone else and cornered, Jack’s response was always, “Ask yuh mudder.”

Again, my friend was angry. “They don’t know Jack-split about anything, especially politics. I bet you when he end up in the US court he can’t do what he normally does?” I was hooked. “What is that?” I asked. He responded, “Well, the last time they make him swear on the Bible to tell the truth, the whole truth and nothing but the truth, he ended up giving them three different answers!”

Tony Deyal was last seen laughing at a Jack and Jill story. When their boss told Jill that, because of the high cost, he was going to have to lay her or Jack off, she replied, “Jack off. I have a headache.” Send feedback to columns@gleanerjm.com