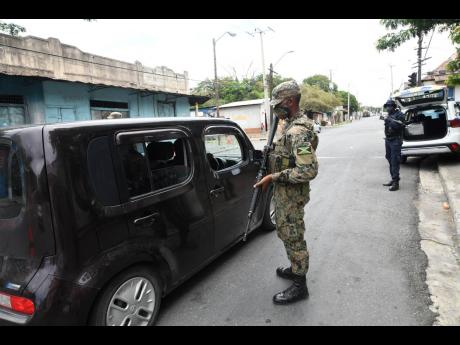 File
In this June 2020 photo, security personnel are seen manning a checkpoint on North Street, downtown Kingston, during a state of emergency.

So public servants are to expect retroactive pay from April 1 last year, on the new scale which wraps up pre-existing allowances into basic pay. But these allowances have been paid already for the months between April and November. So if they are not to be refunded, has their value been ‘worked into’ the new packages, or are they a gift from taxpayers on top of the new scales?

The minister was visibly rattled by Julian Robinson’s questions on this point last week. All the words, formal statements and assurances which have followed have not cleared up the issue. What about an unambiguous statement regarding the duty concession on motor vehicles? Has the full agreement between the parties been published? Still not a mention about improvement in productivity. Help us understand how all that represents prosperity, nuh.

Next issue is the school feeding fiasco. How come we spend hundreds of millions on party conferences, every frippery known to humankind, lavish taxpayer money on loss- making agencies and underproducing people, but cannot afford to feed the hundreds of thousands of undernourished, malnourished and just plain hungry schoolchildren ? And then say that the pickney must wait until the next Budget cycle to be fed. Really!

School feeding this year will receive $5.5 billion. My estimate is that about 400,000 children and young people in the school system are unable to afford the nutritious breakfast and lunch which they require to be alert, not restless, and physically ready to learn. There is no such thing as excellent learning and retention on hungry belly.

Perhaps half of the needy cohort are registered on PATH. Thank God for it, even as we declare it to be scandalously inadequate, given increasing poverty and food prices.

Pause to appreciate how difficult it is for schoolers to become eligible for PATH benefits. Every school principal ought to be able to enrol the appropriate students in the programme. Listen to teachers telling us of the gymnastics they have to undertake to ensure a bite to eat for non-PATH students.

Or are we to join in the delusion that there are less hungry children than that? Of course, parents should do more if they can. Where is the sustained public education thrust to encourage this?

Help us understand what kind of society are we creating where the market encourages every excess of imported food, fashion, high living and false hair, but can’t afford all schoolchildren to have a cup of porridge and a fresh fruit for breakfast, and a piece of sweet potato, an egg and some peas, beans and callaloo for lunch? A fraction of the billions spent on gambling could properly feed all needy children, almost miraculously improve learning outcomes, economic activity and social peace. Do! Help us understand the economic and social priorities behind these choices, let alone the moral considerations.

Last week in Sierra Leone, the government announced that they would spend 22 per cent of all budgetary expenditure on education from this year. That’s much more than Jamaica does. Why would they have decided to go for broke for their children’s welfare while, by contrast, we are ‘hitching’ at feeding our children and failing to insist that they leave school at least with matriculate certifications?

Then help us understand what stops a government which believes fervently that states of emergency are both efficient and constitutional from continuing to declare them? This administration clearly has no intention of working out a consensual crime plan with the Opposition and other interests. Are the futile debates last Tuesday and Friday supposed to be substitutes for effective collaboration? King’s House and the PSOJ will always comply, just as their predecessors have done since 1865.

And again, why couldn’t the court have been asked to expedite the SOE appeal cases, so that we could settle the argument about the constitutionality of SOE extensions and regulations by now?

Then, this one is the hardest to understand. There is support for mandatory minimum sentences, even the death penalty, for murder because the crime outrages the most precious right to life. But many of those same proponents advocate law to allow abortion, the deliberate destruction of a defenceless human baby no criminal to be punished for wrongdoing, not a fibroid or diseased tissue.

So where is the consistency in the value of all human life, indisputably the foundation principle of any society you and I would want to live in?

Here, and I would contend, in many of our thoughts and consequential behaviour patterns concerning human worth, we are cruelly selfish and selective. How come? Wasn’t savagery and disrespect for life the sin of slavery?

We will always have to arm ourselves, normalise neighbourhoods and nations either as aggressors or victims; live in perpetual competition and division until we teach ourselves and our children the transcendent value of the human person. All the great world religions and, I believe, particularly the Judeo-Christian tradition which, despite all distortions, is the foundation of our social, legal and political institutions, promote this fundamental principle.

The alternative we are thoughtlessly lurching towards is a neo-Darwinian contest which pits us against each other on the basis of race, class, political tribe, religious denomination, consumerism and money. Check what’s going on in the United States or Ukraine.

See it right in front of us when government spokespersons at the highest level accuse their opposition counterparts (without whom they cannot govern) of treacherously conniving with criminality because of disagreement over a crime-fighting mechanism.

Delroy, what example of dispute resolution and mediation is that?

Help us to understand, nuh!