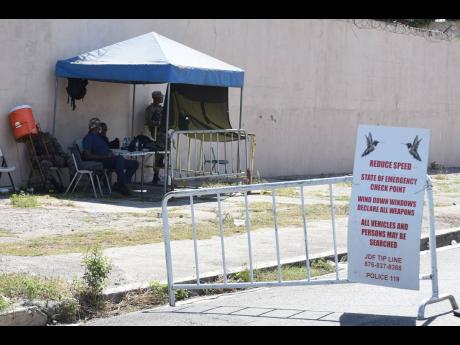 File
In this file photo security forces are seen under a makeshift tent as they man a checkpoint.

One of Haemorrhoid’s best shaggy dog tales was his story of the man who had two women.

Remember Haemorrhoid? Ernest H. Flower was a lazy Articled Clerk (student lawyer before UWI’s Law Faculty took over) whose constant complaint about “piles and piles” of files on his desk earned him his graphic nickname. Haemorrhoid was at too many of our domino games, but never as a player. We tolerated his domino ignorance because we could always expect a hilarious story from this world-class raconteur.

So, one day, the Dunce suggested we play ‘winners pose’. Gene Autry was aghast! “What do you mean by winners pose?” Autry asked sarcastically. “Do you get to pose just because you won the previous game with a blockbuster hand? If you do, which one of you poses? Do you get to code while pretending to decide? Or does the player who actually won play first? You can’t have everything. My table; my house rules! Holder of double-six poses!”

“Yu Man Chan, a young Chinese immigrant, flourished in his adopted land. It wasn’t long before his successful Convenience Store allowed him time a varied social life. Yu never thought of himself as handsome or charming, but yet was always surrounded by young ladies seeking his amorous attentions.

“But Yu became confused. Of all the young ladies buzzing around, Yu liked Edith and Kathryn best. In fact, Yu became determined to marry one of them but just couldn’t decide which.

“So Yu took them, separately, to his favourite movie, but they both enjoyed it equally. He treated them, on different nights, to the same Chinese restaurant. Both loved the same dishes which were, co-incidentally, Yu’s favourites. It was almost as if they’d researched Yu and deliberately decided to like what he liked. But that would’ve been very difficult in those days.

“Yu tried as hard as he could but couldn’t make up his mind. But Yu kept trying even though the task of stringing them along, while keeping them apart, was stressful and expensive.

“Eventually, the young ladies found out about each other; lost patience with the entire situation; and both left Yu for good.”

Here, Haemorrhoid paused for dramatic effect before ending with:

“And the moral of the story is, Yu can’t have your Kate and Edith too.”

As usual, he guffawed loudly at his own joke, then explained to the Dunce that it’s counter-productive to chop and change House Rules for an arbitrary purpose. Unless there’s a worthy cause, pick a rule and stick to it.

I remembered Haemorrhoid’s tall tale during the latest round of on-again-off-again SOEs and Government’s ignoring rules of Separation of Powers with mandatory minimum sentences, including 30 years for murder.

It’s all too arbitrary for reason or logic to grapple. It’s as if PM, desperate to win but not wanting to remove his Clark’s lest he smell defeat, unilaterally clutches at every passing straw, hoping it’ll magically soothe crime’s savage beast. What prevents Government from being the bigger person; inviting Opposition to serious consultations; and coming to real ‘common ground’ (not my-way-or-the-highway ground) regarding conditions under which Opposition support is achieved? The situation (constant claims of “unconstitutionality” yet no court challenge) has gone beyond any credible Opposition saying “never”, but Government’s arrogant One-Don approach to these controversial SOE declarations is inconsistent with effectively improving national security.

Who knows what, if any, will satisfy the Opposition? Whatever it is, Government has the obligation to reach out to Opposition; not the other way around. Then Opposition has an obligation to genuinely contribute.

Crucial to all this, time really come to work towards the ideal of abolishing winner-take-all Westminster governance and introducing a system more amenable to bi-partisan co-operation. Until we arrive at this lofty paradigm, political leaders should be adult about it and put Jamaica first.

Gordon Robinson is an attorney-at-law. Email feedback to columns@gleanerjm.com.