Peter Espeut | Not a pot cover in sight in Brazil 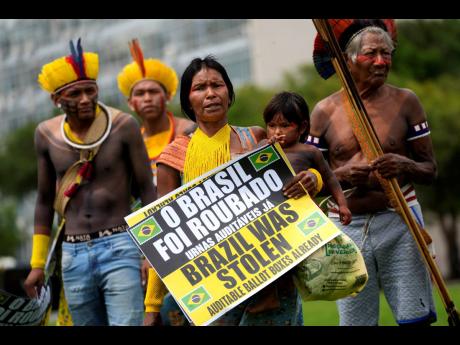 AP
A family of Kayapo Indigenous people arrive to take part in a protest by supporters of Brazilian President Jair Bolsonaro against his presidential election loss in Brasilia, Wednesday, November 30.

I spent all of last week in the south of Brazil (Porto Alegre) attending a conference. This coincided with Brazil’s first match in the 2022 World Cup Finals and I took the opportunity of sitting in the market square to watch it, along with a large local crowd.

Brazil is a huge country – the fifth largest on the planet (3.3 million square miles) – with the sixth largest population (212.6 million). Politicians there have to think big. We have so much difficulty governing 4,200 square miles with under three million people, how would our politicians cope in Brazil!

Brazil was the last country in the Western world to abolish slavery (in 1888) 50 years after the British, and so they have a similar history as ours to surmount. Over the last 200 years there has been much white migration to Brazil from Germany and Italy, as well as Portugal, and so persons of African origin are numerically in the minority; about eleven per cent of Brazil’s population today is classified as black, and about 26 per cent is mixed; but from samba and carnival, to food, music and religion, Afro-Brazilian culture is everywhere.

Like Jamaica, their economy was based on sugar in the early days, and today there’s an awful lot of coffee in Brazil! They are the world’s largest coffee producers! Trying to buy coffee to bring home was a chore, with so many different varieties, roasts and strengths of caffeine. Their coffee-processing industry is also well developed. We have chosen to remain high-end and simple, which I suppose works for us with low volumes of output.

To and from Porto Alegre we passed through São Paulo (Brazil’s most populous city), travelling for an hour (twice) between the international and domestic airports. The highway infrastructure in both São Paulo and Porto Alegre is ultra-modern, and I neither saw nor felt any potholes. Brazil is the eighth largest producer of motor vehicles in the world (production in 2021 exceeded 2.2 million vehicles). There are an awful lot of cars in Brazil!

With court challenges to the recent Brazilian presidential elections still under way, I expected visible street protests. In both Porto Alegre and São Paulo I saw pro-Bolsonaro demonstrations, but they were subdued, poorly supported and confined to small spaces. The few Brazilians I was able to speak with (I have little Portuguese) seemed satisfied with a Lula victory.

Every store, shop, bar and restaurant in Porto Alegre seemed to have a television set, but nevertheless, the municipal authorities erected a huge screen in the large well-travelled public space in front of the market. A large crowd sidled in, some bringing their own chairs, most seated cross-legged on the ground in their obligatory stone-washed and fashionably ragged jeans. Surrounded by a multi-ethnic Brazilian crowd, I was seated among some senior citizens and women with babies in their laps.

Vendors circulated with drinks, snacks, and vuvuzelas, but I did not notice a lot of alcohol. As was only to be expected there was much merriment, and the excitement grew when the match (between Brazil and Serbia) began.

It was a disciplined crowd, mostly in gold-coloured shirts, groaning when ball possession passed to the Serbians, and shouting encouragement when Brazil mounted an attack. And when the goals were scored, the vuvuzelas blared and the horde screamed, but missing for me was the clash of pot covers. A partisan pro-Brazilian Jamaican crowd would have been cacophonous in their tympanic and cymbalic joy! Ecstatic though the Brazilian crowd was, they were not raucous.

There was a trash can lined with a garbage bag near where I was sitting, and spectators constantly made deposits. Strolling through the crowd dressed in bright orange jumpsuits were sanitation workers collecting empty bottles and waste during the game, so that after the match there was hardly any trash in the ground.

Come to think of it, both Porto Alegre and São Paulo were noticeably decidedly clean! Yes, there was graffiti spray-painted on the walls in some areas, but much of it could be classified as street art. And there were many murals and public statues.

On our conference field trip we visited the inner city; we were warned that it was a depressed working-class area, but I saw nothing resembling the neighbourhoods in which I pastor: Denham Town, Hannah Town, Trench Town, Rose Town, Tivoli Gardens and Greenwich Town. Other Caribbean islands like Trinidad and Tobago, Barbados, St Vincent and the Grenadines, St Lucia and Dominica lack the extremes of wealth and poverty easily seen in Jamaica, and so does Brazil; we resemble only Haiti. Maybe the favelas of Rio de Janeiro (which I have not yet seen) may approach Jamaica’s ghettos, but I come away from Brazil convinced that poverty in Jamaica is a pathology that we have carefully created and maintained.

None of the stores or restaurants would take US dollars. To prevent money laundering and to constrain the drug trade there are strict foreign currency laws with stiff penalties. I could not find any black marketer to change my money into Brazilian Reales. How different is Brazil to Jamaica!

Many Jamaicans admire Brazil, but similar history notwithstanding, we have turned out quite different. I don’t think most Jamaicans know much more about Brazil than football. I think we could benefit from studying Brazil’s history and model of industrialisation. I think our approach – relying on low-skilled manual labour – has underdeveloped our people, and has achieved less than that otherwise might be expected.

And I think we need to study Brazilian popular culture, their mechanisms of socialisation, and their education system. We are far away from the human development we seek, and have a lot to learn.

Peter Espeut is a sociologist and development scientist. Send feedback to columns@gleanerjm.com