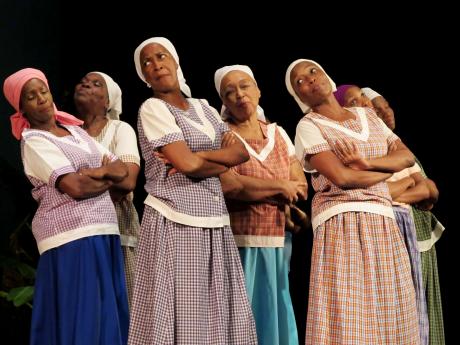 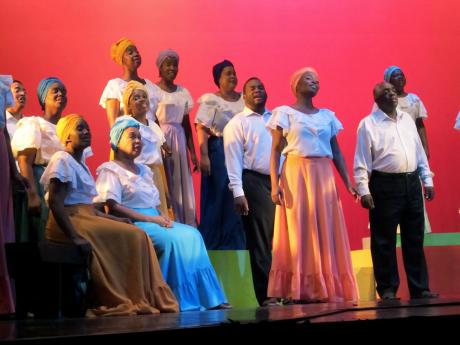 Marcia Rowe It was gospel time for the Jamaican Folk Singers 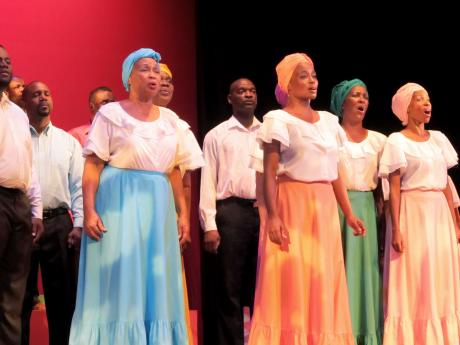 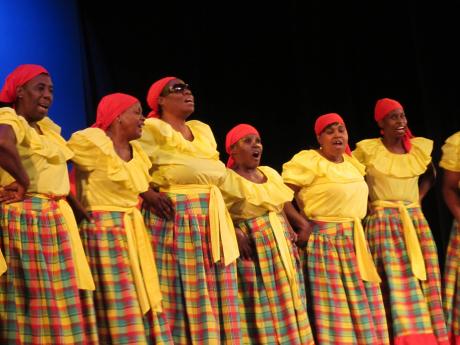 The Jamaican Folk Singers gave a stellar performance on Saturday in the first of two shows scheduled for their 2014 concert season. Unfortunately, there were not many persons on hand for the singing of popular folk and gospel songs or to witness the wonderful stage placements and movements, the creative set, props and costumes.

The two-part programme, under the theme 'One Community', was divided into five acts, At Home, At Work and Marketing were in the first half while In Worship and Socialising made up Part Two. Each act captured the vibrancy of a typical rural community.

The show ran unannounced. Against the background of a yard setting, with clothes on the line, the singers commenced their musical. The first act was comprised mainly of females along with some children. They carried out yard chores to the songs Missa Potta, Beeny Bud and Biddy Biddy, while lessons were taught with Teach lik De Gal and Bread in the Oven.

After work was over, it was playtime, as adults and children entertained with game songs such as the popular 1 2 3 4 and Wapsikaisi. The setting later shifted to the field in the act titled At Work, and male singers, armed with crocus bags and cutlasses, while wearing work clothes, charmed the audience with songs like Missa Mack and Half a Hoe. In the familiar historical setting, the women arrived to prepare meals for their male counterparts and joined in singing Dinah. But it was the entertaining rendition of Dip and Fall Back that will stand out in the minds of patrons.

But alas, the workday comes to an end with a very slow tempo but rather reflective Late a Come.

Once again, the flexible and spacious stage inside the Little Theatre was transformed into another setting, this time it was at the market. Here, set designer Franklyn 'Chappy' St Juste, opted for bamboo frames that allowed the male singers to assemble them rather quickly. And against this backdrop, baskets and other props transformed the stage into the marketplace.

But importantly, with a change into another appropriate set of costumes, both males and females delivered songs such as Helena, Guava Root, Banana and Ribba Ben Come Dung in their customary fine style, and the actions for most of the songs were quite engaging and

Part Two of the programme commenced with In Worship and St Juste replaced the bamboo poles with benches. Likewise, choreographer Paula Shaw opted for fewer movements in this gospel section. Instead, the singers remaining in the opening spot, relied on clapping hands and tambourine to colour songs such as the uptempo Noah and He's Coming Back Again. Costumed accordingly, the group also rendered Hard Road to Travel, He Lifted Me and Someday.

The programme culminated with the act titled Socialising. It was a time of courtship, dancing and rallies to have fun. The entire community, including children, came together for the occasion.

The National Cultural Group for the Blind also joined the party, doing songs like Chi Chi Bud Oh, I am a Betta Woman and Tief Tek Ova Town. The fine evening of entertainment concluded with the entire cast singing Lignum Vitae.