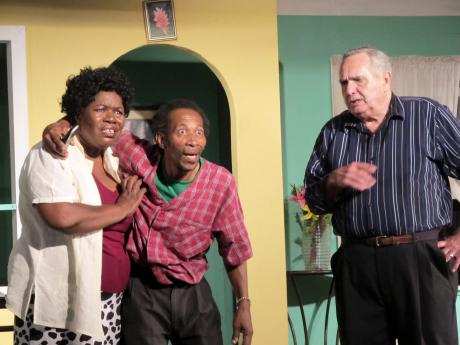 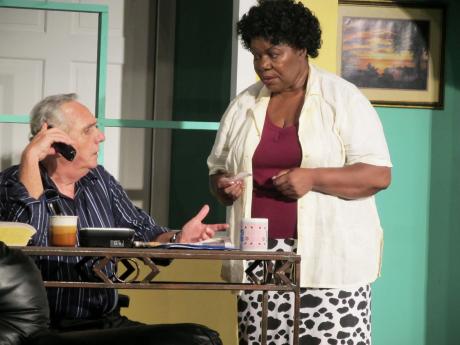 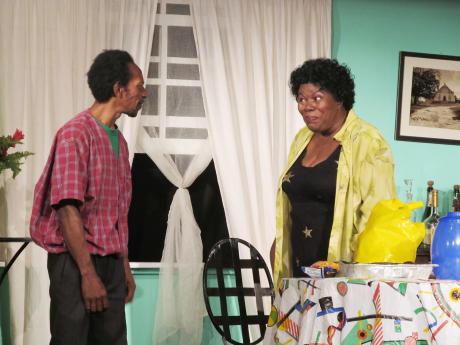 Lotto Money is much more than its unimaginative title and its mundane byline: "A talk show host fights little man over lotto winnings". The play also highlights the absurdity of the human condition in a somewhat comical way. This, and more, was revealed against a backdrop of good acting, fine directing and questionable set placement, and choice of props on Friday's opening night.

The story is set in the home of talk show host and newspaper columnist Walter Nelson (Munair Zacca) and wife Alzira (Dorothy Cunningham). Along with many twists and turns, it stubbornly unfolds in vibrant dialogue and graphic reporting from the characters.

It begins with Alzira receiving a phone call from Samuel DeSuza (Peter Heslop). He wants to remind Walter of his promise to give him half of his lottery winnings. But while the poorer and humble Samuel clings to the promise, for the talk-show host, it was just a tongue-in-cheek moment. Thus, upon learning that his numbers actually played, an arrogant middle-class Walter refuses to deliver on his promise. His joy, however, soon turns to anguish when he realises that Samuel's name - not his - is written on the back of the ticket. This leads to contracts being drawn and torn up, more trips to Walter's house by the hapless Samuel, and just as many more phone calls from three off stage characters: Samuel's wife, Sandra; his 80-year-old mother-in-law, Cassandra; and Gertude, Walter's secretary.

The language of the adapted play was easy to follow, however, its intrigue is not the fight between Walter and Samuel, but that it exposes the fault line of bigotry and hypocrisy. Walter, in his selfishness, believes that his wants of a town house and yacht are more important than Samuel's need to feed his extended family of 10. He, however, delivers on his promises when he destroys the contract, much to the chagrin of his wife and mother-in-law.

Staged at the Theatre Place in New Kingston, the thought-provoking play directed by Pablo Hoilett saw performances from the experienced Munair Zacca, Dorothy Cunningham, and Peter Heslop. The three actors played their roles with conviction, and their choice of gestures and mannerisms for their characters were appropriate.

Additionally, Zacca captured the arrogance, stubbornness, and the despair of the talk show host (Walter Nelson) quite well, despite struggling with his lines at times. Cunningham made a one-dimensional Alzira look interesting, while Heslop's portrayal of the more challenging and comical salesman Samuel DeSuza was believable, except for an out-of-character salutation.

Hoilett's blocking for the most part was quite decent, especially those at the desk, but there were a few grey areas that he may want to address, the main one being entrances and exits.

Lotto Money is well worth seeing in spite of the opening night hiccup. It is engaging and is appropriate for the entire family and guarantees much laughter.