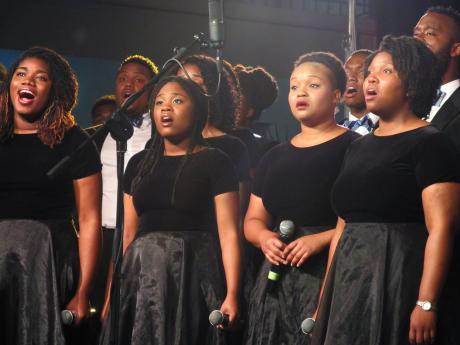 Marcia Rowe
Members of the Aeolians Choir of Oakwood University performing at Jamaica College in St Andrew on Sunday. 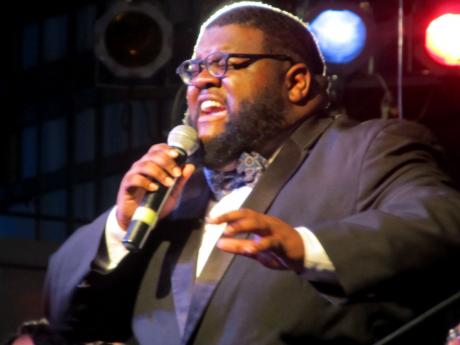 Marcia Rowe
A member of the choir sings Great is thy Faithfulness. 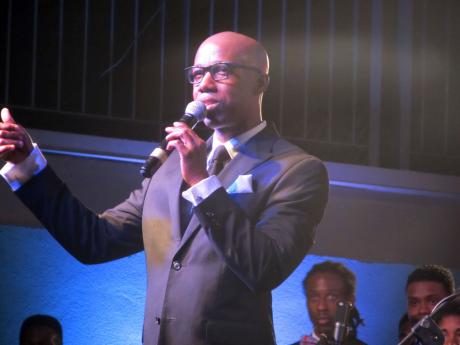 On Sunday, the United States of America (USA) in general and Alabama in particular celebrated the 50th anniversary of the historic march from Selma to Montgomery. In Jamaica, 48 students, the choir conductor and supporting personnel from Oakwood University in Huntsville, Alabama, ministered through songs and motivational remarks at the Karl Hendrickson Auditorium, Jamaica College (JC).

According to the Aeolian choir's director, Jason Max Ferdinand, who is from Trinidad and Tobago, the march's anniversary is significant for all Americans and especially African-Americans, as the USA has a black President. "We were asked to sing for that (the USA commemoration), but the invitation came after we already had everything in place here (in Jamaica). But our university president and two buses from Oakwood went down there today, so it does mean a whole lot to us," Ferdinand said.

It was the choir's second trip to Jamaica, having visited in 1999 when Ferdinand was a student. The choir has also toured Russia, Canada, Trinidad and states other than Alabama during their annual Spring Break Tour. Choir manager, Jamaica-born Vilroy McBean, said the weeklong visit to Jamaica goes beyond singing.

"For the last four years, every time we go on a Spring Break tour, we have had the bus breaking down and it is freezing cold. I was determined that this year we were gonna come to the warmth. But, more so, I wanted to expose our young people to mission [work] and I thought that Jamaica was a very good place to start their mission experience," McBean said.

"The Aeolians has been a touring choir for many years, but they have not really got involved in a mission work, and so this is a wonderful opportunity to not only just sing, but sing for those who can't sing back or for those who cannot pay to attend their shows. And so this week, we spent time with the children, going into schools and going into underprivileged areas, and it was a wonderful experience," he said.

Among the institutions benefiting from gifts of recorders, as well as other gestures of kindness and friendship, are St Jago High School and Dare to Care. Part proceeds from the concerts will go to the George Dewar Fund. The late Dewar was a member of the Jamaica Constabulary Force and Kencot Seventh-day Adventist Church.

Sunday's concert was organised by the Education Department of Kencot SDA, in conjunction with CassMac Foundation. It was well supported, mainly by the SDA family.

However, the concert did not get off to the start that the organisers would hope for. Approximately 30 minutes after the scheduled starting time the congregation lost patience and showed displeasure by clapping, which quickly brought a member of the organising committee to the stage. Likewise, as if on cue, patron of the concert and reason for the delay, Senator Floyd Morris, arrived and the anticipated performance from the award-winning choir commenced.

The Aeolians commenced their ministry with God's Gift. And, in what seemed to be a way of putting the songs in context, they followed by showing a CNN documentary, Roots. They segued into another inspirational song, Let the Voices Sing a Song. Before the all-black attired group rendered their version of the popular hymn How Great Thou Art, arranged by Dan Forest, members of the congregation were invited to sing the Jamaican version, which they were more than willing to do. The invitation to sing was to be repeated in the second part of the concert, with Take the Name of Jesus with You.

The concert also featured information on and demonstration of Negro Spiritual songs from slavery. The songs were performed a cappella and served different functions for the slaves, two of which were to put in secret codes and pass on history. Among the Negro Spirituals performed were Rocking Jerusalem, specially arranged for the group, and Jericho Walls come Tumbling Down.

At intervals, individual choir members performed songs, including Great is Thy Faithfulness. The best treat for the audience came at the end of part one when Ferdinand asked everyone to stand for a particular song the choir had practised. It turned out to be Jamaica's National Anthem. He claimed the Aeolians learnt the anthem over three days because of their love for the country.

And after a roll call of majors and what could amount to testimonies of what the tour means to them by four members of the group, two of whom have Jamaican connections, the Aeolians of Oakwood University closed the informative and entertaining concert with a stellar performance of Jerusalem.