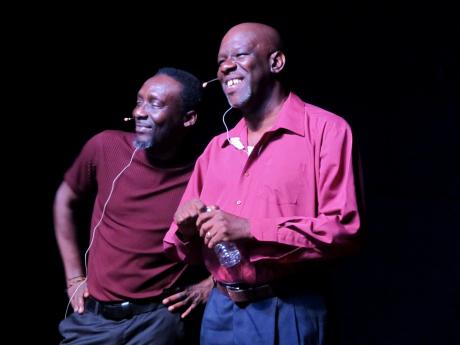 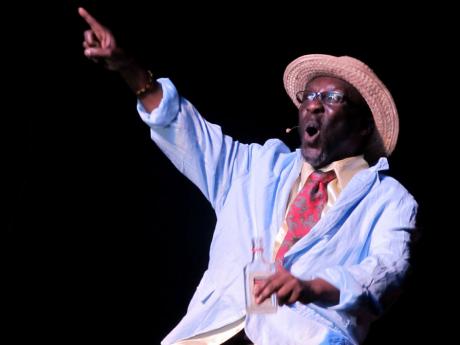 Marcia Rowe
Blakka in character as a drunken man. 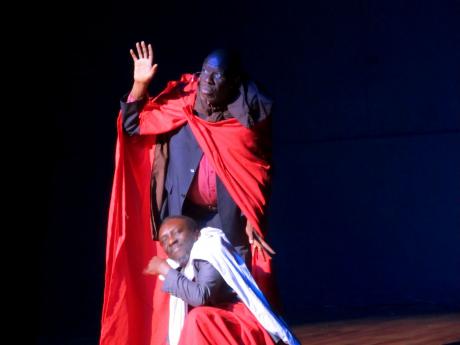 Thirty years ago, a pair of talented Jamaican actors, who were no strangers, embarked on a stand-up comedy career. Both Owen 'Blakka' Ellis and Winston 'Bello' Bell were competitors at the Jamaica Cultural Development Commission Festival of the Performing Arts during their high-school days. Years later, their competitiveness played out on the level playing field of the Jamaica School of Drama. Joining the force of their talents saw them gaining audiences in Jamaica and around the world, as they guaranteed a strong dose of satire done in drama, songs and dialogue and aided by spectacle.

On Monday, the dynamic comedic duo, popularly known as Blakka and Bello,

celebrated their milestone anniversary by repeating their feat of former years, with great success.

"It was refreshing to see the two of them on stage again," said noted Jamaican actress Carol Lawes. She was among the audience in attendance at the Courtleigh Auditorium, for the event dubbed '30th Anniversary: Bello and Blakka Reunion'.

"It was interesting to deal with the nostalgia that has been the standard of their shows for a long time, but I found the new materials really good. Bello, I think, was outstanding in terms of his characterisation. His attention to details and his timing were absolutely wonderful; and Blakka's character's truthfulness was no less valid," said Lawes.

Her last remark was in reference to the second half of the two-segment show that saw the comedians in different roles, poking fun at church and bar, restrooms in public spaces and a hilarious comparison between then and now, or as Blakka's character called it, "confusing time", among others.

In role as a drunkard, Bello's character was philosophical on bars and churches. "Both bar and church are similar, in that they are deep in the spirit," said the drunkard.

"Drunkards need rum to air their views," he continued his satire. "Bar is always next door to a church. It is a natural progression to leave from the bar to the church," he noted, before speaking of a few of his experiences in church.

In reliving the old-time days, Blakka's character made a comical comparison between courtships of then and now. One example was that in the past, a man would use poetic lyrics to court a woman, as opposed to now when words like 'murder' is used as an expression of endearment.

A rendition of Mona Visa, with a modern tweak, was also in the offering, as well as another favourite, Ganja Tree Oh Ganja Tree. After alternating the use of the stage, in closing the show, both abandoned their respective roles to give a last-lick joke, before, with the use of lights and shadows, and the words of Dennis Scott's poem, Uncle Time, they made a dramatic exit.

But the dramatics were not restricted to part two. The opening act was just as imaginative. It commenced with the two comedians draped in red gowns as they did a parody of the creation story in Genesis for an impactful entrance. Staying true to the comic genre of the show, the audience also learned of how the comedic duo of Blakka and Bello came into being, with reference to the role played by acting tutor, Honor Ford-Smith.

From the singing of their signature Bringing in the Weed, poking fun at each other and politicians, to coining words like 'illiperate' (meaning to read lips) - it was a stream of humorous lyrics of varying degrees. And the audience rewarded each humour with the appropriate outburst of laughter, and at times topped it up with some applause.

For Bell, who has not performed on the theatre stage for some time, it was an overwhelming experience. "Tonight was great for me. I am overwhelmed because it's been a long time since I have performed with Blakka as a duo." But the chemistry between the two was still very strong as the show's success belied the fact that they did not do much rehearsal, instead they sat down, spoke about what they wanted to do, and depended on their maturity, Bell explained.

The 30th Anniversary: Bello and Blakka Reunion will be on tour between April and August 2015. The period was chosen simply because Ellis was born in April and Bell in August.

Whereas Easter was the preferred time for the premiere Ellis told The Gleaner, "We tried it and it turned out to be a good idea." The show will go to Barbados and Toronto, and in August to New York. The organiser, Ellis International, is also in dialogue with a contact in London.