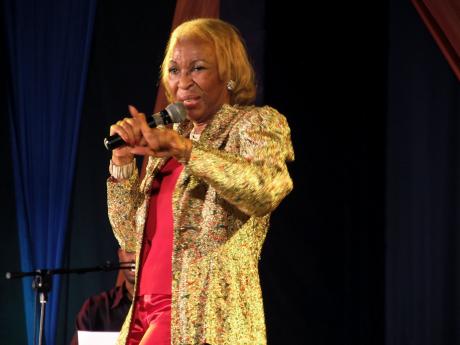 Marcia Rowe
Myrna Hague, with a display of grace and style, stole the show. 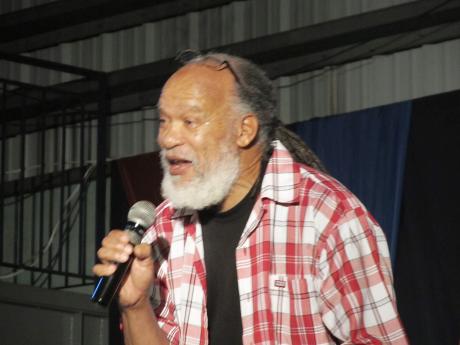 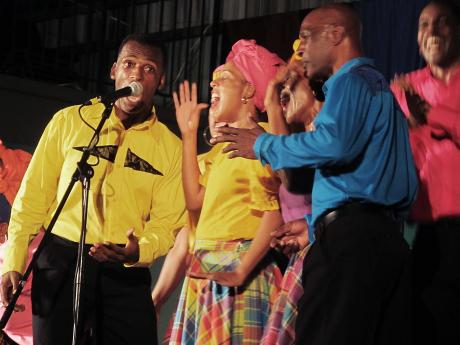 Marcia Rowe
Members of the Carifolk Singers in performance. 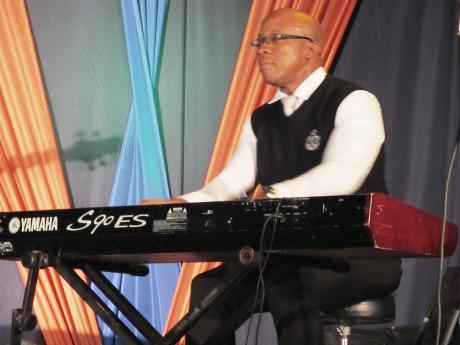 WHILE IT was not a full house at Sunday's staging of McCam Child Development Centre Benefit Concert, there was no denying that those who came out to support the worthy cause were satisfied with a show that offered great entertainment. The suppliers of the delight ranged from the amateurs to the icons, and combined, they delivered a variety of musical genres with the use of vocals, the steel pan and other instruments.

However, it was MC Fae Ellington who got the house relaxed with her opening parody of United States President Obama's now famous greeting that was said to the attendees at his town hall meeting, recently held on the University of the West Indies Mona campus.

Ellington later called on the members of the Immaculate Conception High School Steel Pan to commence the musical treat. Clad in blue polo shirts and jeans pants, the ladies from the Constant Spring Road place of learning had the auditorium of the all-boys institution (Jamaica College) rocking with songs such as Under the Boardwalk and Tribal War.

The Carifolk Singers followed shortly after. Their vocals had support from congo drums, as the group gave dramatic renditions of Solja Man and Under the Banyan Tree, before ending their set with an energetic performance of Wheel Oh Matilda.

Next was Andrae Campbell, and then John Williams; both communicating effectively through musical instruments. Williams showed his diversity by first giving a splendid performance with his violin and then on the keyboard. After playing Just A Closer Walk, he told the audience that it was a privilege playing and sharing in the noble cause, and that "we should take the fight to them for the children".

On keyboard, Campbell continued where the Carifolk Singers left off, with a captivating performance of Hol' Him Joe, along with other selections on keyboard. To close his electrifying set, he invited his son Ashanni to join him on stage.

But no doubt, the show belonged to Ernie Smith and Myrna Hague. Hague's set was a blend of musical genres, including blues, reggae, and ska. From her opening selection, I Got Me A Man Who has Heart Like a Rock, followed by Through the Streets of Kingston, Tribute To John Holt and her closing, Somewhere Over the Rainbow, she was a display of grace and style.

Smith closed the show with hits such as Pitter Patter and Sunday Morning Coming Down. He had the audience join in with That's the Kind of People We Are, and before singing his 1975 single, Jesus Comes for One He Comes For All, he explained that the song was written after an enormous hangover and he told God that "if he let it pass, I will not go this far again". Then it was on to his first recorded song, Tears on My Pillow. After a short medley, Smith returned for an encore performance with Sweet Sensation, to close a fine evening.

Proceeds from the show will go towards much-needed funds for the McCam Child Development Centre, a non-profit organisation. The institution caters for children of special needs and thus requires a small class size and specialist educators. It is the only centre of its kind in Jamaica, according to Pauline Watson-Campbell, the programme director, who also told The Gleaner, "It is a very expensive programme to run, so each year we try to do something substantial in terms of fundraising, but nothing on this scale. What made the difference this year is that Myrna Hague came on board."

Patron of the concert was former Custos of St Andrew Marigold Harding.