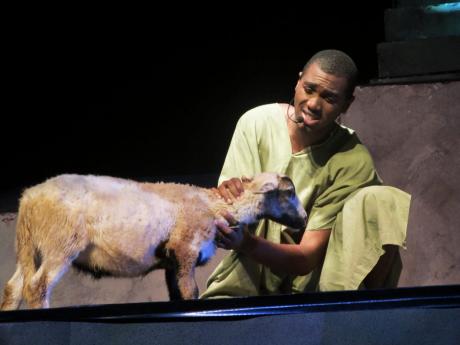 Marcia Rowe
A villager and his sheep 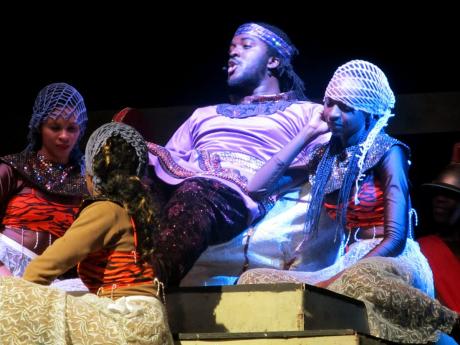 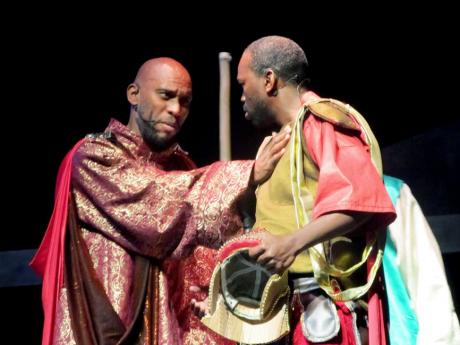 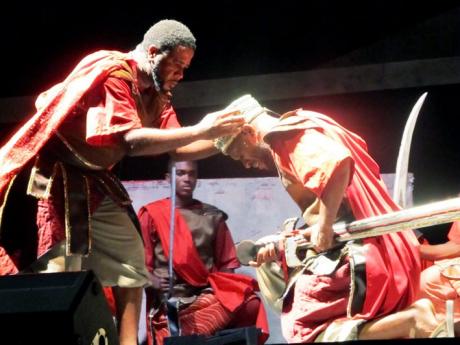 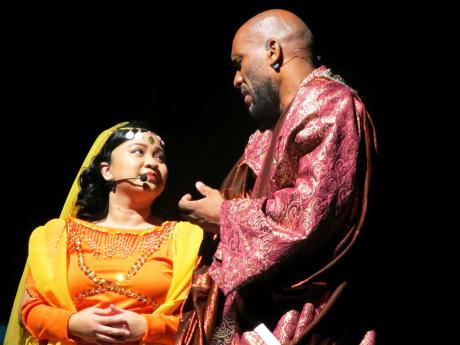 With amazing lyrics, fantastic musical arrangements and wonderful singing, Father Ho Lung and Friends lifted the story of King David from the pages of the Bible and placed it on the open stage of the National Arena in Kingston. The mixed-style production saw the musical elements being enriched with fine acting, lively coloured costumes, pleasing lights, a towering set, and bold directorial decisions. This was the scenario on Sunday, the second of two performances.

In the Father Richard Ho Lung-penned script for King David, David comes to the party in Scene Three. The scene reveals the young shepherd boy (AndrÈ Shepherd) singing as he tends to his sheep. His battle with a bear that attacks his herd is witnessed by young Jonathan (Chavon Rogers), son of King Saul (Hugh Douse) of Israel. The encounter leads to David's introduction to Saul, his destruction of Goliath (Allan Lewis), and his eventual usurp as the King of Israel.

Thereafter, the three-act plot continued to untangle with dramatic twists. An older King David (Wynton Williams), donning his battle gear, celebrates with his people on the street when the Ark of the Covenant is brought to Israel, and demonstrates his love for the poor by joining a group of country people in building an assembly hall. These associations with commoners did not go well with his wife Michal (Caryl Constantine) and son Absalom (Chevaughn Clayton). Both mother and son try to unseat David from the throne and experience dire consequences.

But while David's piety and humility are sincere traits, he is also ignoble. His actions lead to his near suicide. Subsequently, the man chosen by God is forgiven and is commanded to go and build His Kingdom.

Ho Lung's epic musical examines unconditional love for God and humanity, while showing the ugly side of infidelity, but there is hope in knowing that with forgiveness comes redemption. The language of the play is standard English with traces of dialect. It gives an account of David's life with poetic liberty in some scenes, as is the case of the name of one of the characters.

The acting was commendable as the very large cast of actors, singers, and dancers gave commanding performances. However, one of the defining elements of the production was the powerful singing by the cast. The songs were arranged to different genres of music. And with guidance by musical director Wynton Williams, the cast rendered each song with the right dynamism and blend of harmony. So were the dancers who delivered Clayton Giddern and Paula Shaw's choreography. Not only did the dancers complement the singers, but the dances reflected the inner thoughts of the characters.

The acting by the principals is also worth mentioning. Williams, who played the character of David for a substantial part of the play, seemed to have had a clear insight of his role. David is a character of contradiction, and Williams' portrayal of the various emotional states of the character was well defined. From David's grief of losing his best friend, wife and son to the joy of being with Bathsheba (Geramie Yson), Williams was believable in his speaking and singing.

It was also convincing acting from Jacinth Wright. She not only seemed to have understood and executed the role of Cassandra as the voice of reason, but was very consistent with her hunched back throughout. Good job also from Constantine, Yson, Douse, Clayton and Craig Walters as Nathan.

Director Greg Thames and his assistant Alwyn Bully moved the large cast with some ease. They put to effective use, the length and breadth of the stage, including levels, as well as the area just in front of the audience. Likewise, their decisions to have live animals onstage for a non-realistic play provided some comic relief, especially when the animal relieved itself on the stage. However, they may want to review the constant movement of pieces of the set by the crew during some scenes, as well as ensure that the actors use the open stance so as to not hide their facial expressions and actions.

Plays produced by Father Ho Lung and Friends are known for their astounding spectacle in lights, costumes, set and special effects. But in these areas, King David has fallen a bit short. While the sound quality remained of high standard, there was not much of a wow factor in the special effects. The P.J. Stewart-designed set captured the period in colours and gave the Middle East feeling; and the various heights and shaped ramps were functional, too. But there were far too many shifting around of pieces to create the different settings. The costumes, however, were appropriate for the style and period of the play as well as the status of the characters. Likewise, lighting by Robin Baston also transitioned smoothly and were effectively integrated into the play.

Overall, King David is a splendid production and should be seen and enjoyed by the entire family.