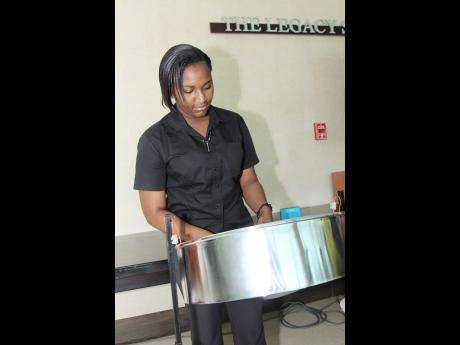 In What began as a marketing strategy, the CB Pan Chicken Championship, will be celebrating its 10th anniversary this year. And in order to mark this significant anniversary, not only is the 2015 series dubbed PAN-X, but some new components will be introduced to the food festival.

The first regional championship is on August 27 and the grand final on November 1.

This and more were revealed at a short-but-effective media launch held on Wednesday at The Jamaica Pegasus hotel, New Kingston.

The morning programme got going with humour from former Celebrity PAN winner Terri-Karelle Reid, who was also host of the proceedings.

Except for solo pan player Samantha Williams from the University Panorama Steel Band providing pre- and post-show music from the corridor alongside the Legacy Suite where the launch took place, there was no customary musical item on the programme. However, brand manager of CB Foods Ltd, Alicia Bogues, and director and COO, CB Group, Matthew Lyn, filled the void.

Their speeches were tantamount to storytelling - but based on real people's experiences. And like true storytellers, they held the attention of their audience, who learned that, in spite of the adversities there are hope and inspiration can come from the unexpected.

"Rodney Bent knows all too well what it's like to have no job and nowhere to live. He identified the mango tree near the Grant's Pen Clinic as the place he used to call home," Bogues began her speech. She highlighted the successes and benefits of the Pan Chicken Championship to small-business owners (pan vendors) who, like Rodney, were in the pan chicken business before entering the competition, He entered in 2012 and won.

True stories were also shared about the 2014 third, second and first-place winners, Carlton Jobson, Natalie Sills and Siterena Gilling, respectively. Jobson walked away from the event with cash and gifts, Sills was motivated to experiment with new recipes, and Gilling, who was also the Western Regional Champion, "stepped outside the box and presented curry-jerk chicken with tamarind sauce." Subsequently, she has received training and has grown her business.

Before thanking the sponsors who were divided into three groups - foundation members, returning, and the newbie sponsors, Bogues concluded her story with "and that's why we do it. These stories and people make it worthwhile."

Lyn, like Bogues, began with a story. He spoke of an expatriate friend who, while spending her time in Jamaica at some of the finest spaces, thought her visit to Trench Town was the most real experience she had. That became the catalyst for the new features for 2015, the Jamaica Food and Drink Festival; Drink-Nyam-Jam over four days and nights with eight separate events.

The new food features were planned over a two-year period. The result - Thursday, October 29 is Pork Palooza, a pork-centric feast. The Friday, with its theme 'Divide and Conquer', will feature three events. They are Sticks and Stones (all food will be served on sticks); Red, White and You for the wine connoisseur; and Crisp, (fried chicken and beer).

On the Saturday, there will be Meet Street, a Food Truck Party, and Jazz Brunch that promises to serve food not normally seen on a brunch buffet. On Sunday, November 1, downtown Kingston will come alive with the final day's event, PAN-X, the face-off featuring regional champions and more chefs.

Patrons should expect to be also entertained by performances from artistes, but in spite of the proverbial twisting of the arm, the steadfast Matthew Lyn would not say who they will be. However, he said, entertainment is always part of the package, the organisers are working on some "fine things" and "you will have to come to find out".