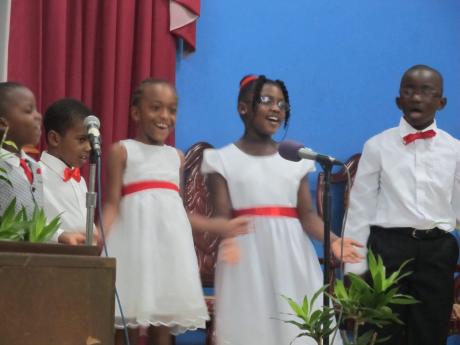 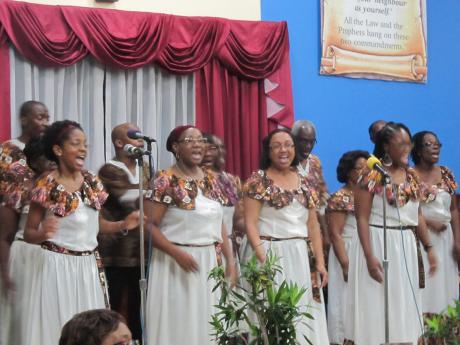 Marcia Rowe
Members of the Portmore Chorale in action. 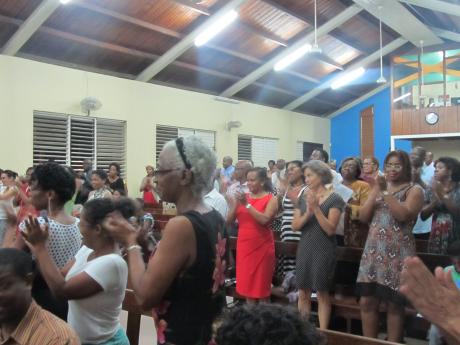 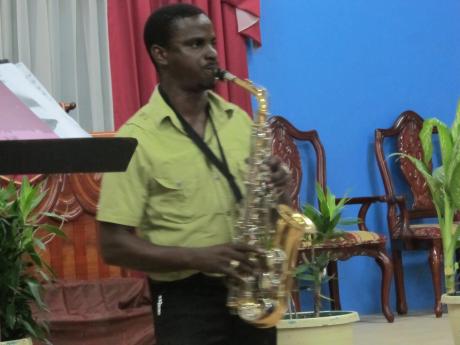 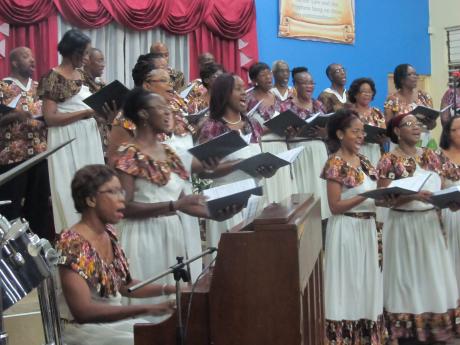 Christmas is a time to celebrate the birth of Jesus and no group is more aware of this than the Portmore Chorale. Each year, they target two churches to spread this joyful news mainly through unfamiliar yet uplifting Christmas carols.

Recently, the chorale, along with their guests, stopped at Calvary Gospel Assembly on Sundown Crescent in St Andrew to continue the tradition. Needless to say, the congregation sang their praises.

The Gleaner caught up with a few members after the performance.

"It was incredible! I love the quality of the harmonies and just the dynamics. They are very professional," said Karen Siyaneola, who was hearing the group for the second time.

"I heard them a long time ago. Each time I hear them, it's better. I can hear the soloist now and see the animation of the conductor. It was really very nice," she added.

Another member of the audience agreed. She, too, had seen the group perform before and believed that they have grown since then. She also thought the show was a blessing and was well organised.

"It was worth the standing ovation that they got," she said.

The programme, titled 'A Joyful Celebration', began at the scheduled time to an almost-full church.

Led by conductor Delroy Williams, the Portmore Chorale performed two of composer Joseph M. Martin's works - Every Valley and Hope, Peace and Joy. It ended the set with George Friderick's And the Glory of the Lord.

After saxophonist Jeffery Brown's first of two delightful appearances, a small group delivered a medley of songs arranged by John Purifoy and the Jon Paige head-bopping, feet-stomping song, Your Light Has Come.

The veterans, including the conductor and director Karen Henry, were on show in the last act in Segment One of the programme. Leading by example, they gave a good account of themselves with the Pearce and Choplin-composed I Wouldn't Miss Heaven for the World. They ended the segment with a cliffhanger created from a splendid performance by duet Rusheyne Lovindeer-Roberts and Sharon Burnett of Once Upon a Night.

As is customary, the removed their business-formal attire, inclusive of a jacket, for a more casual ethnic-influenced costume in the second half of the show. And with the change, the music ministry went up a notch.

Among the songs administered were the uptempo In the Twinkling of an Eye, arranged by David Angerman and Michael Barrett, and the more familiar Kirby Shaw-arranged Angels.

It was in the group's final set, however, that the congregation was to experience the Jamaican Christmas. It came in two songs composed by Noel Dexter. They were Hosanna De Baby Born and the penultimate song, Good News.

The Portmore Chorale is also known for adding a new song to each season - and Season 30 was no different. Making its debut was an amazingly written and justly delivered Great I Am, arranged by Heather Sorenson. It was a fitting conclusion to 'A Joyful Celebration'.

The show also saw performances from the Fabulous Four+, five young offspring of members of the chorale. The young ones had as much fun singing as the congregation did enjoying their performance of Run Come Quick.

MC for the show was Beatrice Anderson, who was just as inform-ative as she was entertaining.

The second and final Christmas show will move to the Church of the Holy Spirit in Cumberland, Portmore, on Sunday, December 15.