‘Jazz in the Gardens’, a festive feast 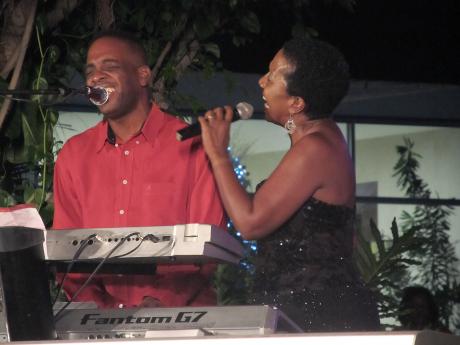 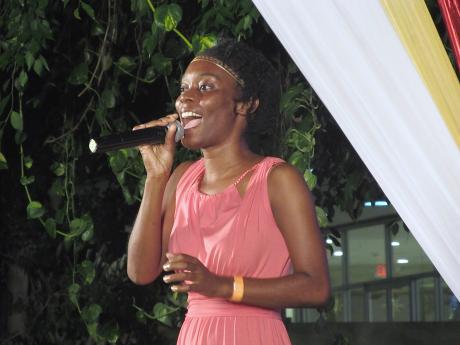 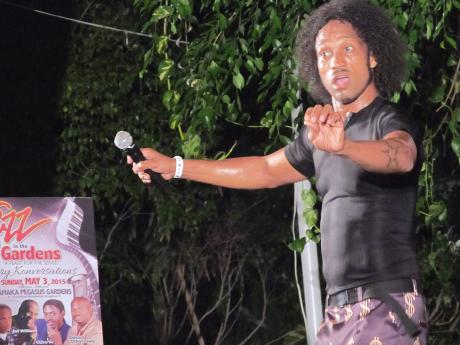 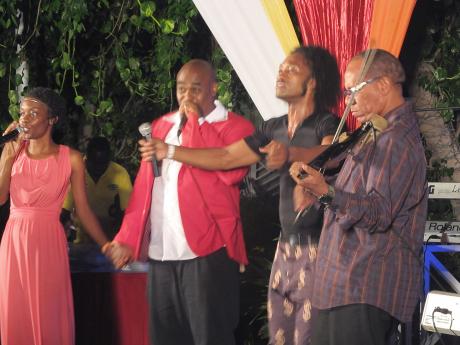 Marcia Rowe
From left: Diamara Neil-Walker, Jabez, Rojjah and Jon Williams, performing, Lean on Me, the closing item for The Best of Jazz 2015. 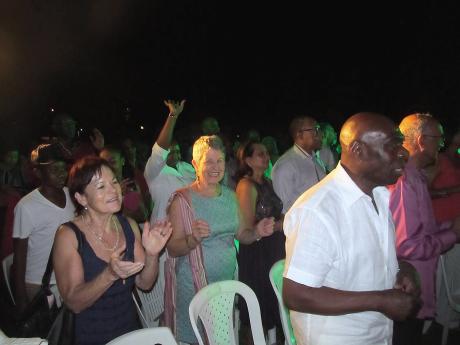 There are a number of ways to gauge the success of a show. Three of these are the size of the audience, whether they stay to the end, as well as the calibre of artistes on the programme. Sunday's staging of Jazz in the Gardens, A Feast of the Senses, was successful on all three fronts.

Themed The Best of Jazz 2015, the show began promptly with an impressive number of patrons. And as the evening played out, the home venue, the lawns of The Jamaica Pegasus Gardens, saw the audience growing, sending the organisers scurrying for more chairs. The reason for their attendance did not disappoint them either. Chosen by a number of their peers, the five to have got the nod as the best in the 2015 series had patrons clapping, singing and enjoying their musical feast.

Karen Smith, who was on the March show, got the Christmas edition going. Playful and at times passionate, she took the audience through Dejavue, On a Clear Day and Someone to Watch Over Me. She closed with producer Ken Nelson's request of The Prayer, to end her appetising act. To pull off the powerful delivery of the song, she joined forces with keyboardist Chris McDonald of the backing band Desi Jones and Friends.

Keyboardist and violinist Jon Williams was also on the card. He announced that he would deliver four songs. And so he did. He began his act with the standard Joy Spring that he often prescribed for his third-year students at Edna Manley College (EMC). Then he moved to an original, a folksy reggae-jazz beat titled Imani. The song was

composed at the birth of his daughter Imani some 21 years ago. But it was with a feet-tapping jazz Latin variation of a Niccolo Paganini study that his mastery at the keyboard was on display. He seemed to be consumed by the music as he extended its infectious rhythm to the audience.

A performance from Williams without playing his violin would be a disappointment. And perhaps mindful of this, the astute performer returned to the stage to fulfil his musical obligation. He did so, and with his customary style and energy, he delighted his audience with a medley of Jamaican Christmas songs, with support from Desi Jones on drums.

Humour and talent came to the stage in Jabez. He opened his account with One in a Million You, announced that he had 18 years of marriage under his belt, and informed that his next selection was not only one of his favourites, but "a painful song". And with that he gave a fantastic performance of I'm Never Gonna Fall In Love. Before taking the now fully attentive audience to church, he shocked those who did not know and amused those who did by informing, "You know, I am not known for those songs. In fact, I am a pastor.

"But I am a pastor with soul," he said, continuing to tickle their funny bones. "And you know I am going to stop those love songs. When I just got saved, my preacher said I should not sing love songs. But I know that when my wife and I are making love, I never heard Amazing Grace."

And with that, 'Pastor Love' segued to church singing "I'm drinking from my saucer'cause my cup overflows," a song he wrote about two years ago. Shortly after, he had the jazz congregation standing to join him as he sang, "Ah nuh one prayer mi pray."

Part two also delivered the richness of jazz, but by two performers with contrasting styles.

Now known for her unusual combination of wonderful vocals wrapped in a form of shyness, Diamara Neil-Walker started her set with I Can Only Imagine. After explaining that she had a habit of writing musical lyrics, the teacher of music continued with Give it to God. She also included in her package Just A Closer Walk With Thee and In the Sweet Bye and Bye. Both were creatively arranged to jazz beat and just as beautifully delivered.

The theme for Jazz in the Gardens, 'A Feast of the Senses', was strongly manifested in the closing act, Rojjah. His captivating animated movements was just what the doctor prescribed. Contrasting to Neil-Walker's rent-a-tile use of the stage, the young, relatively unknown was an energiser bunny. Wearing a dollar sign printed suit with brown background, he was relentless in his delivery of songs like Jimmy Cliff's The Harder They Come and Trapped, as well as Bob Marley's Could You Be Love, all on jazz beats.

The entertainers subsequently returned to give their closing rendition, Lean on Me.

A member of the organising team, Nancy McLean, welcomed first-time patrons and thanked those who were returning, as well as resident MC Michael Cuff, who was absent. In his place was 'jazz enthusiast' Vernon Derby.

With a promise of a treat for 2016, McLean also said the series would return to its regular every other month, beginning on February 28, 2016, and concludes in December. Among the treats to be expected are new talents and a collaboration with EMC's Jamaica School of Music.