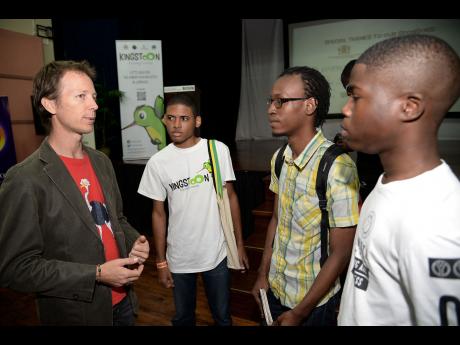 While talent and time go into doing an animation project, in addressing the audience inside the Vera Moody Hall, Edna Manley College of the Visual and Performing Arts, recently, Mike Buckland placed a lot of focus on what happens after the film has been made.

Buckland was presenting The Triggerfish Story, detailing the development of the South African studio which has the films Khumba and Adventures in Zambezia among its credits.

Of course, included in what happens when a film is finished, is where it is shown and while Buckland said the United States is "the Holy Grail of release", it is highly competitive. Breaking through means going up against studios like Pixar and Dreamworks. "It is difficult to get in there," Buckland said.

So Triggerfish has had success with other markets for animation, among them Russia, The Netherlands and China.

He also emphasised that it is a long-term business and patience is required.

"We have been doing CG animation for 10 years. We have done only two films. It is a long, hard, process," Buckland said. For a recent 18-month production, six months was spent on doing the storyboards, this for a 25-minute film.

He noted that building networks and getting a foot into the international market must be accomplished. So while the long-term film project is being done, Buckland said, "you need to do bread and butter work" to pay the bills and keep the talent which does the work at the studio.

He gave advice on shaping that pool of talent and also taking care of the finances. "Keep your team lean. Focus on morale and culture. It will make the difference between finishing this film and not finishing it," Buckland said. "Smaller teams are also easier to manage. It makes for a better working atmosphere. Keep it small, keep it lean, keep it efficient."

There was knowing laughter when Buckland advised that for persons doing animation, when doing the first movie, "keep at least 20 per cent of your budget for emergencies. Gap funding is very expensive. Don't let the director know, don't let the actors know."

He said that when Triggerfish was doing Adventures in Zambezia, they were excited - then midway the film they had to make a change in the third act. It was difficult. "The big studios can do that, the independents can't," Buckland said.

In funding that film, Buckland said "we took quite low salaries" in the hope that when it got to the box office it would bring good returns. Still, after about seven years, those returns are just beginning to be realised.

Happily for Triggerfish, Buckland said people want to hear African voices. And he told those developing animation projects to "trust your process. You know animation - to an extent... If you have got to the point where people are willing to give you money to make a film, you must know something."

"Hang in there. It is a long process. Have patience," Buckland said.

Buckland, who grew up in Zimbabwe, saw Toy Story when he was 14 years old and "it blew my mind." Now, he is disappointed that in Triggerfish's home country, "not enough black unemployed South Africans know about animation as a viable career option. We need to change that."