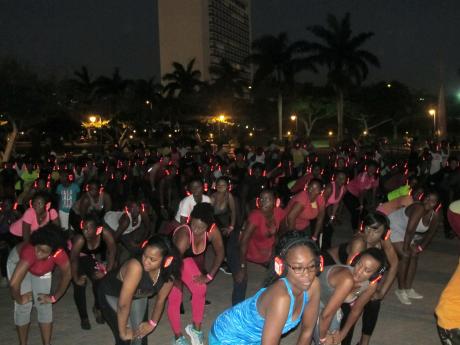 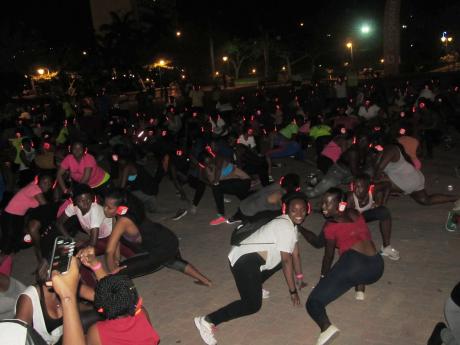 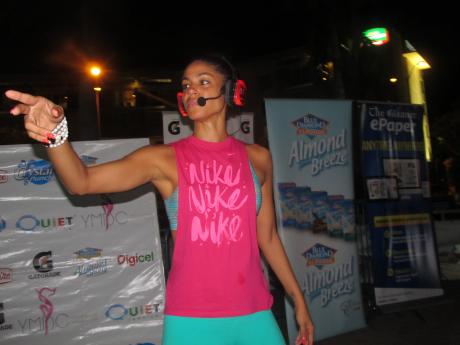 The amazing concept that evolved from a practice of listening to music through a headphone in a dance studio was transferred to Emancipation Park, located at the intersection of the busy Half-Way Tree and Oxford Roads, recently.

It was quite a spectacle, as a number of persons wearing glowing headphones in the evening shadows resulted in a dance class full of fun and excitement. More important, however, the other patrons using the park were not disturbed by the music being played for the class.

The organisers dubbed the event Quiet Headphones Qarnival Qardio with Yendi. And dance instructor Yendi Phillipps put the never-done-before concept into perspective for The Gleaner.

"Quiet Headphones contacted me. They want to work on something. So I said I am working on my next series (Yendi's Master Dance Class - YMDC) so come on board with me. They loan me a pair of headphones, I went into the studio, tried it and it worked. It did not fly off. So it was perfect."

From the studio, the concept moved to the park, on Thursday. And after accessorising with armbands followed by headphones, the gathering moved to the designated dance space. The emphasis was on the carnival season in preparation for the recent road march.

With the preliminary instructions (such as how to adjust the volume on the headsets) and warm-up out of the way, the former Miss Jamaica World beauty queen took her students through three routines. The first routine, she told them, comprised five movements, with the fourth being a Samba Step. Each routine was separated by what she called hydration breaks.

It turned out that they needed the break, as Phillipps had her students at times extending their bodies in various directions, while exploring levels to the sound of the more successful music from Trinidad and Tobago's 2016 carnival. And with the music filtrating through their bodies, the main concentration of dancers was on getting the moves right. Sure enough, most did.

Later, Phillipps, who has a degree in dance, also shared with The Gleaner her song selections and choreography for her classes. She chose songs that she likes: "The songs that had me moving to the music."

She theorised that if the music made her move, it would do the same for others.

The young mother, who has been dancing for 27 years of her life, added that: "When I hear music, I see choreography in my head, I hear the music in movement, and so I get a feel of what people will enjoy doing."

Choreography may sometimes take five to 10 minutes, as it comes very natural to her.

She also thought the class "was absolutely brilliant, I enjoyed it thoroughly. There was a moment when I literally had goosebumps, and the energy was high."

The prospective revellers were also treated to giveaways and other gifts from sponsors. And for them, it was a really good session.

"I think it was a good strategy to use the dance moves for an exercise, for everybody to build a vibe and enjoy themselves either way," said one participant.

And for Kacey-Ann Calloo, it was a very, very good idea, as she plans to go home and practise what she learned.

It was the first time that YMDC was done in the park. The impressive turnout was based on two days of promotion. The first series in the master dance class was conducted in November 2015.