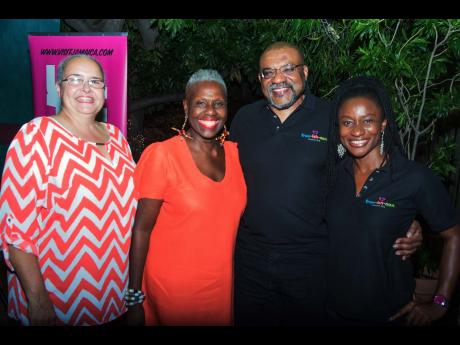 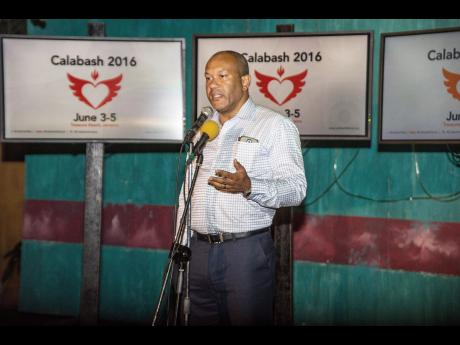 Patrick Planter
Jason Hall of the Jamaica Tourist Board. 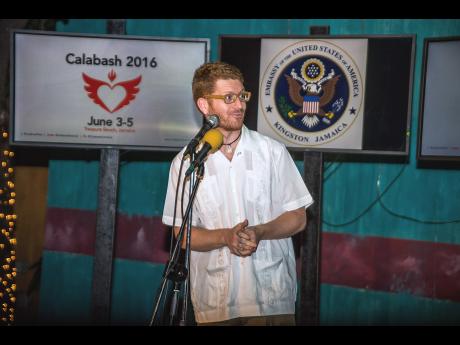 The organisers of Calabash, the biennial literary festival in Treasure Beach, St Elizabeth, sum up this year's theme, 'Fruu-ish-aan', as "an affirmation of the steady movement towards an unfolding of a vision of something that began modestly, but full of hope and giddy ambition 15 years ago".

At the event's official launch, held at Redbones Blues Cafe, New Kingston, on Tuesday evening, host Dr Kwame Dawes, compressed that definition into "the balancing of all things". With the festival's T-shirts a notable part of each staging, Dawes added that there are also "very fancy T-shirts that even men can wear".

Giving part of the roster of authors close to the launch's end, Dawes noted that there are many award winners. Among them are Jamaicans Kei Miller, whose awards include the Forward Prize for his poetry collection, The Cartographer Tries To Map A Way To Zion, and Marlon James, whose novel, A Brief History of Seven Killings, has won the 2015 Man Booker Prize, the American Book Award, The Anisfield-Wolf Book Prize and the OCM Bocas Prize for Caribbean fiction.

Pamela Mordecai and Diana McCaulay are also on the Calabash 2016 line-up. There will be a celebratory reading of Dr Erna Brodber's first novel, Jane and Louisa Will Soon Come Home.

Jason Hall of the Jamaica Tourist Board said "Calabash is one of the events that truly stands alone", bringing literature, food, music and vibe together in a unique way. "This is the genius of Jamaica why we are so successful as a destination," Hall said.

Joshua Polacheck of the US, Embassy noted its support of Calabash, which "reflects what Jamaica has to offer to the world", since 2003.

Chantal Hylton-Tonnes, outlined the Creative Production and Training Centre's (CPTC) involvement in Calabash 2016, as part of its drive to record Jamaica's cultural output for its JamVision station.

"What is 30,000 hours in the CPTC archive with no Calabash footage?" asked Tonnes-Hylton. "We can't allow amazing public expression to come and go unrecorded."

In addition to the readings on the main stage, CPTC will be interviewing authors and audience members.

While there will be many literary prize winners at Calabash 2016, there will be some persons who will come away with a prize. Professor Carolyn Cooper, who hosts the open mic sessions, announced the inaugural Marlon James Prize, gift certificates which will be handed out for most outstanding pieces in that section of the festival.

"As most people know, Marlon James 'buss' on the open mic session at Calabash," Cooper said.

And Justine Henzell announced another new Calabash feature, an app which gives quick access to information about the festival, along with its website, www.calabashfestioval.org.