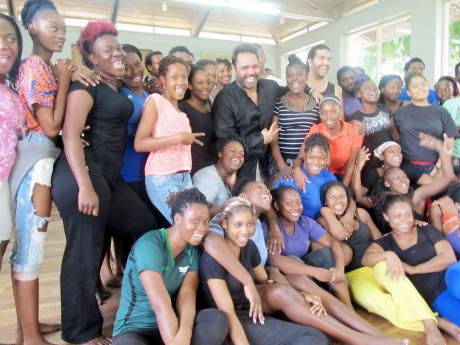 Marcia Rowe
The participants and instructors in the master class held at the School of Drama, Edna Manley College of the Visual and Performing Arts, last Wednesday. 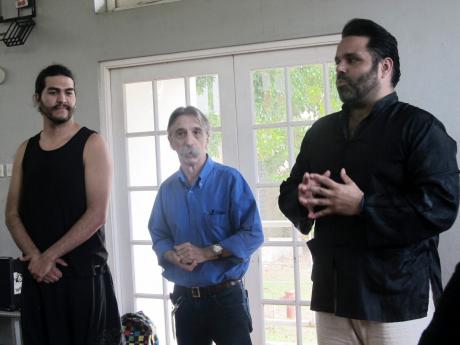 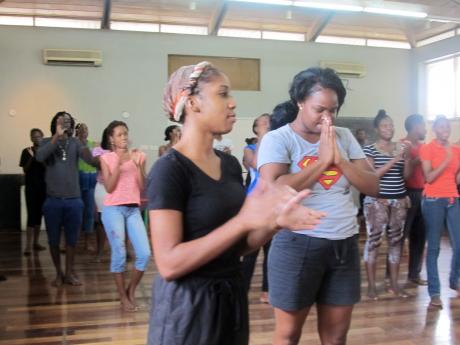 Marcia Rowe
Students of the School of Drama, Edna Manley College of the Vsual and Performing Arts, during a master class conducted by Miguel Sahid and Andrés Mejía of Sociedad Actoral Hispanoamericana at the college last Wednesday.
1
2
3

Wednesday, April 13, 2016, was memorable for some students at the School of Drama, Edna Manley College of the Visual and Performing Arts.

Discouraged by their family, friends and the society in general, a number of them were on the verge of quitting their studies. Then Miguel Sahid and Andrés Mejía, actors and theatre educators from the Sociedad Actoral Hispanoamericana of Miami, USA, visited the Arthur Wint Drive, St Andrew, campus and engaged them in a series of motivational exercises.

"The session was very inspirational; it was self-motivating. The part that captivated me the most was when they spoke about persons who are struggling in the art, because there are persons out there who do not see the art as important, especially as a career," said teary-eyed fourth-year student Leisha Francis.

Najuma Taylor said, "It was just what I needed to hear because we don't have a lot of encouragement as actors, so I thought that they really brought it. I was actually thinking to put this [her studies] on pause, but after the whole session, I realise that this is my passion and I need to stick with it."

Yohan Reynolds liked the exercises that were used to purge discouragement. "First, we were deflated and then we renewed ourselves and then became triumphant," he said. "I like the fact that two men from another country and another culture could come and connect with us and help us to overcome troubles that we are going through. It was very amazing to know that we connected."

This connection was also noted by Director of the School of Drama Pierre Lemaire. "What was interesting was that they connected very quickly with the students and they did not talk about theatre. They made them practise drama exercises. They were working with emotions, rhythm and what we would call vibes, and they work extremely well, even with the first year students," he said.

Perhaps the connection was made easier for Andrés Mejía because he too has walked the proverbial mile. Although he has been in theatre all his life, Mejía was told by his mother that he could not survive on acting in Colombia. He was encouraged to do something different, so he studied business administration.

Mejía then migrated to the USA, where he got involved in the Sociedad Actoral Hispanoamericana. "I want to be an actor. Everything changed because I took the decision to do what I like, and I have been teaching acting for the past 10 years," Mejía told The Gleaner.

Miguel Sahid's story also provided hope for the students, but in a different way. He and Mejía are both scholars of one of Spain's greatest poets and dramatists, Federico García Lorca. In 2014, Sahid became the youngest actor to receive an award from the king of Spain in honour of Lorca. "I was born and raised in Puerto Rico and now my name is known worldwide because of my work on Lorca," Sahid told The Gleaner.