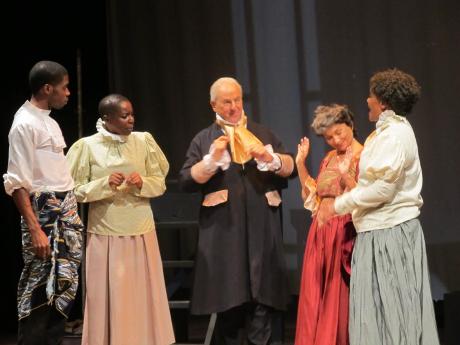 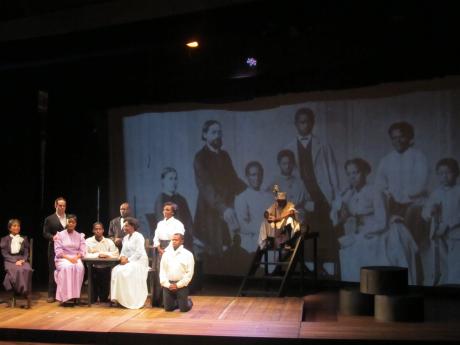 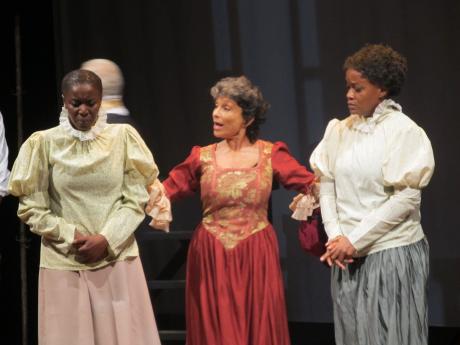 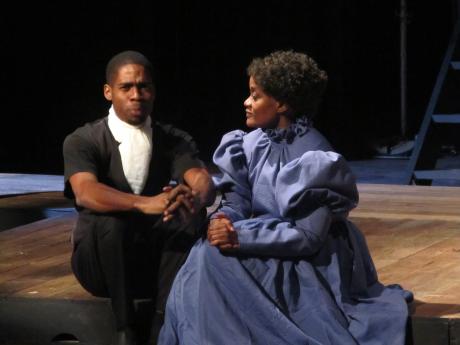 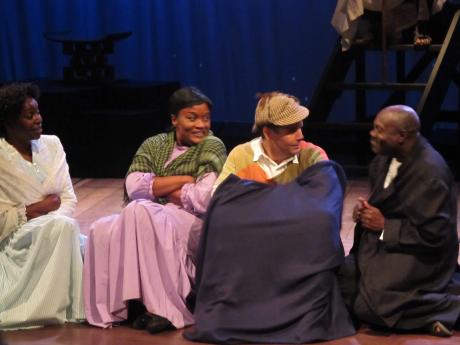 Marcia Rowe
Catherine with husband Johannes and her two children from previous marriage. 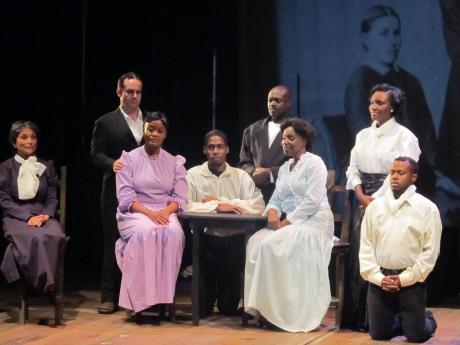 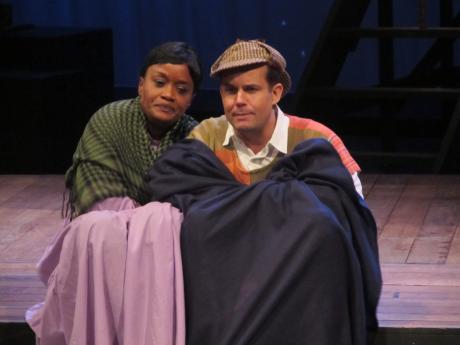 It can be challenging writing and mounting a production that is based mainly on a historical subject. Foremost is the challenge of how best to merge historical realities with theatre reality, ensuring the entertainment value while remaining true to history.

There can also be the challenge of where to start that which often covers several decades in the average two to three hours expected length of a play. Along with, should the story begin in the present, and through flashback of some sort move into the historical past, or should the narrative commence at some juncture in the history of the subject, with the possibility of omitting some valuable information? The University Players chose neither, with some success.

In their latest venture, Catherine Mulgrave - African Odyssey, seen at the Philip Sherlock Centre on University of the West Indies (UWI) Mona campus, on Saturday, opening night, director Brian Heap instead used his cast to narrate and dramatised a significant part of Mulgrave's life based on her husband Johannes Zimmermann's diary.

The story spans 58 years of the life of the relatively unknown African-Jamaican, played by Nadean Rawlins. It is non-realistic in style and starts with what seems to be the spirit of Catherine's African grandfather (Carl Davis), in the form of a dancer (Mikhail Samuels), preceding him and the son who is reading his fathers diary. Wearing all black, the other cast members joined them. Led by the son, they began to recite a favourite folk tale often told to Catherine by her grandfather.

Soon after, the fast paced account of Catherine's tale shifts to Luanda, Africa, where a happy Catherine and her sister (Makeda Solomon) are lured to a slavery ship. En-route to Cuba, the ship is wrecked off the coast of Old Harbour, Jamaica. In spite of the environment of the then Jamaican society towards blacks, both girls and a male relative were adopted by the Governor of Jamaica, Constantine Henry Phipps, the Earl of Mulgrave (Paul Issa), and his wife Maria Hilary Nicholson).

They ensure that both girls are educated, albeit Moravian, and subsequently Catherine becomes a teacher and later, a missionary in the Gold Coast of West Africa. Her British education makes her a valuable asset in the Basel Mission. The result was her interracial marriage to the German Johannes Zimmermann (Jean-Paul Menou), after a failed marriage to the Liberian George Peter Thompson (Cadine Hall). Some of her other adventures include the restarting of a girls school when the first one was destroyed by fire and overcoming accusations of practicing against her Christian principles.

Heap was very successful in ensuring that the Professor Maureen Warner-Lewis based research was easy to follow. Using video images to reinforce different settings, for example, the stained windows for the church setting when Catherine and George tied the knot and the familiar symbolic tree to show that the characters are in Africa were effective. Likewise his use of images (dark clouds) to reinforce the mood of the characters and his use sound effects were just as great. In essence along with costumes, set and lighting, the production was strong on spectacle too.

Overall, Catherine Mulgrave - African Odyssey, is a history lesson worth learning, as it also highlights the juxtaposition of Christianity and the African ancestral belief in the minds of the Caribbean people. Although a Christian, Catherine is always reaching out to her African grandfather.