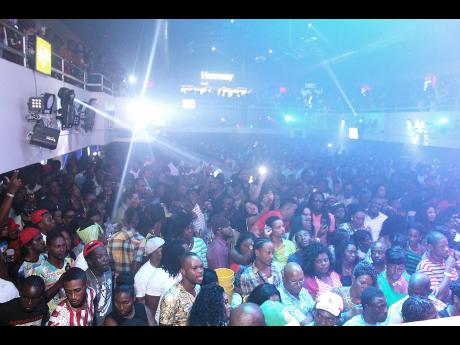 Anthony Minott
A scene during a Magnum All Stars Face-off between Fire Links and Richie Feelings at the Famous nightclub in Portmore, St Catherine.

The Famous nightclub is officially no more, but word out is that a new Hive is getting set to have the space buzzing soon.

At the beginning of the year, Famous nightclub in Portmore, St Catherine, closed its doors.

However, the space was recently acquired by True Jem Management Limited, which could indicate a revival of the once popular spot.

"Negotiations wrapped up at the beginning of February, but we didn't acquire the name," Phillipe Edwards, marketing director of True Jem, explained to The Gleaner.

"There were assets that were bought," he said. "Like air conditioning, fixtures and things like that, but it's a different brand."

And along with this new brand, will be a new name - Hive.

When asked if he knew what caused the closure of Famous, Edwards could only speculate, as he told The Gleaner that he believed it was a shift in focus to the Tracks & Records brand.

"I think they wanted to focus on franchising Tracks & Records. I think it was more of an overzealous risk with such a big nightclub."

Edwards believes the Famous space developed the culture of a venue as "one-off events were successful, but on a regular night, it was just too big. It wouldn't feel like there was a crowd."

Edwards also says that the original design of the space was more suited to be used for various events rather than a series of events.

Now under the direction of a new management team, the space will no longer be utilised as a nightclub.

"It's going to be a multipurpose indoor venue. It's actually under renovation now. We're about to relaunch at the end of this month," Edwards told The Gleaner.

"From concerts to shows, to plays, to parties; it was originally meant for that. We're bringing it back to what it was supposed to be," he added.

"We've already started booking the space. It's not like nothing's happening," he reassured.

The grand opening of the new space will take place on May 26.

"It's going to be a full-service situation," Edwards told The Gleaner, promising a display of the full range of services to be offered by the new brand.