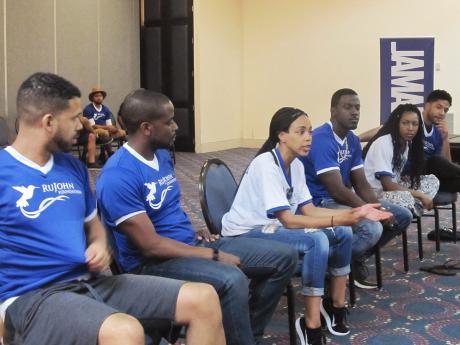 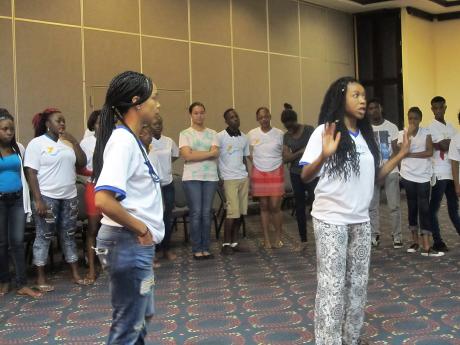 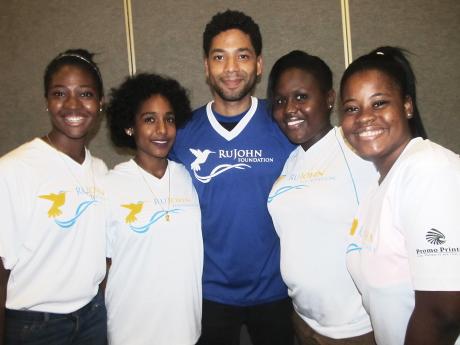 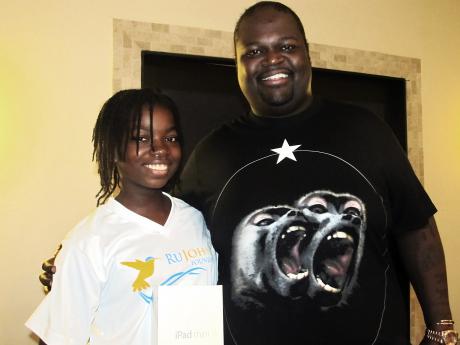 Christina and Andrew Bachelor started the RuJohn Foundation in 2003 to honour the memories of their Jamaican grandparents, Ruth and John Tulloch.

Since then, the Foundation has made significant contribution to the lives of many young Jamaicans, through scholarships, sports gears and school supplies. Four years ago the young philanthropists included acting and music workshops to their slate of contributions. They were able to do so with the help of friends from Hollywood.

The team recently transformed the Jamaica Pegasus Hotel's Montego Suite into several workshop spaces. The acting workshop saw the largest turnout. But the music workshop, though relatively smaller, was just as engaging. The coaches of both disciplines not only took their charges through various activities, but inspired them with their personal experiences.

"If I am not use to it but I want to do it, I am going to learn it. For me, that's also when preparation meets opportunity. And you don't study one type of thing unless you are trying to be one type of thing," Jussie Smollett of the Fox series Empire, told the aspiring thespians.

And Iman Crosson, who is known for his impersonation of President Barack Obama on You Tube, advised them that, "Training and taking acting class is very important."

Making reference to Usain Bolt's achievement through training, Gabrielle Dennis of Fox Medical Drama, Rosewood, told the 14 -18 year-old participants, "If you want to be good at anything you have to keep practising."

Smollett was on his third stint for the RuJohn Foundation. He told The Sunday Gleaner, that what they also hoped to get across to the students, is that "a lot of times society tells us that we have to leave our homes to accomplish our dreams, or that we have to battle or compete with each other, but instead what we should be doing is just pooling together to create content for ourselves. That really highlights all of us in our individual talents and in our creative moments."

Coaches Lance Gross of Tyler's House of Payne, Jazmin Simon of HBO's Ballers and Dule Hill of West Wing, were also on hand. Hill who came last year, (his parents having Jamaican roots), said "when they (Andrew and Christina) invited me to come out here, I jumped at it. I love the passion, the talent. I love giving just a little bit of wisdom and inspiration. It's the least that I can do. It's because of this country why I am here in the first place."

Simon was honoured to be in Jamaica. On her first trip, she learned about the work of the Foundation from Hill. He said how great it was and how great he felt after. And so when the opportunity came I jumped right on it. All the kids were engaging and fun. They were eager to learn and have great questions."

In the music workshop it was words of similar inspiration from Coach Jason 'Poo Bear' Boyd, also on his first trip.

"No matter how much I have accomplished or what I have done, I am always listening to my own stuff and critiquing my own stuff just because I want to be better and I want to grow."

Overall Poo Bear, who has written songs for the likes of Justin Bieber, was impressed by the performance of his young students. He told The Gleaner, "They really did good. I did not expect them to really show up and participate. It shows that they care. Even the ones who were a little shy, came out of their shells. So I am happy about this. I will be back next year and the year after that."

The hands-on workshops, also saw the participants doing various activities. The students in acting were challenged with the high concentration Zip Zap, and their music counterparts were challenged to perform their compositions. Alvin Reid of Calabar High School and Anya McDonald of St Andrew High School for Girls, were the respective winners of iPads.

For Reid, who is planning to sit Digital Media and Film Making at CXC CAPE, the prize will be helpful. McDonald said winning the iPod means a lot "because I did not expect get an iPad". She shared that in the workshop, she was taught how to construct music and songs and then used the lessons learned to win the challenge.

The workshops were made possible with sponsorship from various companies, but the organisers have one request: "We do have sponsors but one of the challenges is to get food. Just somebody to come on board to provide some form of meals for the kids attending the workshops," RuJohn Foundation member Ingrid Bachelor expressed.