Woman Tongue Returns For One Weekend Only 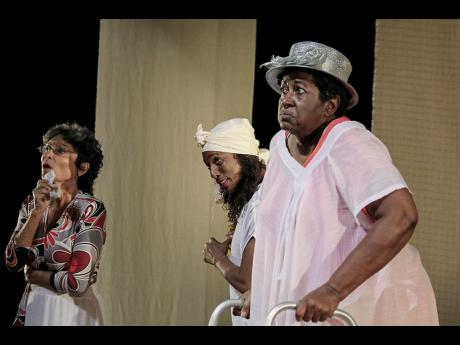 When it ran for a single weekend in May, Tanya Batson-Savage's Woman Tongue received multiple standing ovations and a clamour of requests that the play make a return. Audiences had great praise for the content, the innovative and remarkable direction by Eugene Williams and the vibrant, nuanced performances of the play's stellar cast - Karen Harriott, Barbara McCalla, Bertina McCaulay, Hilary Nicholson and Carol Lawes.

Finally, producer Scarlette Beharie has announced that she will be able to grant this wish with Woman Tongue's return July 15-17, 2016 at the Philip Sherlock Centre for the Creative Arts (PSCCA) at the University of the West Indies, Mona, for five shows.

"We are ecstatic to be able to do this second staging, as the feedback from audiences has been phenomenal," Beharie said. "We've received so much interest and excitement from people who saw the show and wanted to see it again or wanted their sister, cousin or mother to see it. Many women have shared how the play made them want to cry one minute, only to burst out laughing in the next, so it's a joy to be able to share this experience again through the kind support of the Jamaica Yellow Pages, our major sponsor," said Beharie.

The anthology play, which is Batson-Savage's debut full-length work, features seven separate yet interconnected pieces that explore different aspects of women's lives, dancing on the knife edge between comedy and drama, as it explores love, loss, loneliness, sex and sexuality, and even death.

"I find men's reactions to be particularly interesting," Batson-Savage said. "While women made up the bulk of our audiences, the men who have turned up are genuinely surprised and pleased, once they realise that it's not male bashing, and while men are discussed, it's more about the women. They also soon realise that they could learn a thing or two from the women portrayed in the play."

Woman Tongue plays Friday, July 15 through to Sunday, July 17 at the PSCCA. On Friday, showtime will be 8 p.m., while there will be two shows at 5 p.m., and 8 p.m. on Saturday and Sunday.