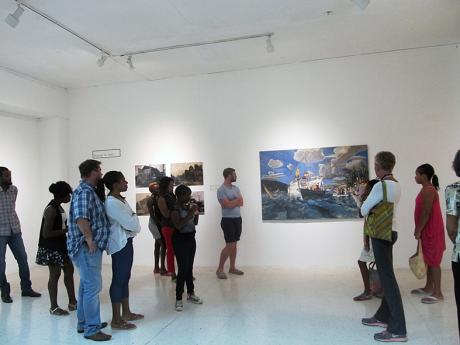 Marcia Rowe
Some patrons viewing the Kingston Part One: The City and Art exhibition during the August 2016 Last Sundays programme, held at the National Gallery, Kingston. 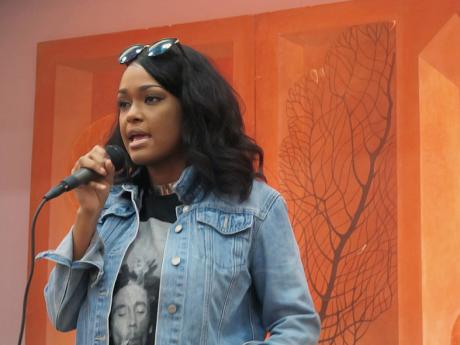 Marcia Rowe
Jane MacGeizmo performs at the August 2016 staging of Last Sundays at the National Gallery of Jamaica, Kingston. 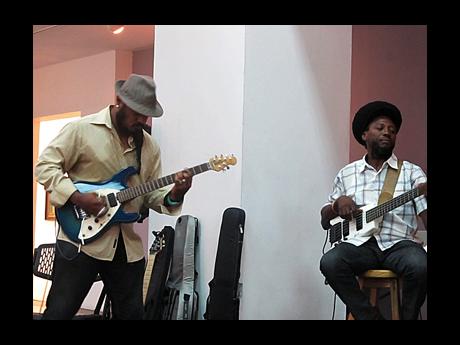 Marcia Rowe
Members of the Band Babies, Wayne McGregor (left) and Andrew Campbell, perform at the National Gallery of Jamaica. 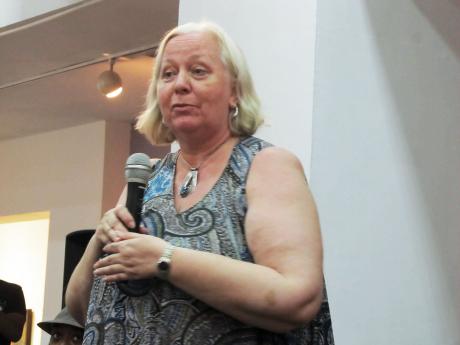 Last Sundays is the intriguing title of the monthly hybrid event held at and organised by the National Gallery, Kingston. The short, compact, informative and entertaining programme began as an experiment four years ago. On Sunday, the August 2016 version had the organisers feeling convinced the experiment continues to be successful.

"Today, we are happy. In spite of inclement weather, persons showed up to see the current exhibition 'Kingston Part One: The City and Art'," O'Neil Lawrence of the National Gallery told The Gleaner.

The initiative provides free entertainment and free tours of the gallery, so that more people can be reached.

"All our Last Sundays are in support of getting people to see our current exhibition," Lawrence elaborated.

With this in mind, the entertainment package is limited to one act from any of the disciplines of the performing arts. And so at approximately 1 p.m., before the patrons were taken on tour of the exhibit, they were treated to a live performance from emerging musical artiste Jane MacGeizmo. This was after the opening remarks from the National Gallery's executive director, Dr Veerle Poupeye.

Poupeye explained: "It is actually four years, this year, that we have been having Last Sundays at the National Gallery. It started as an experiment as part of the profiling for the Barrington Watson's 'Retrospective' in 2012, and we decided to keep it as a way to bring people to the National Gallery in a more relaxed and accessible way"

After Lawrence's brief introduction, MacGeizmo, the "genre-spanning artiste", made her way to the stage. Against the backdrop of a mounted wall painting, she had the audience rocking and applauding to some of her original songs, such as Babylon and You Are King to Me. Her jazz cover was also well received.

MacGeizmo was backed by the Band Babies - Andrew 'Bassy' Campbell and Wayne McGregor on guitars and Wayne from Chronixx's band on drums.

The timely musical performance ended on high, and then it was on to touring the exhibition, 'Kingston Part One: The City and Art'. Its focus is on how the city of Kingston influenced artistic production and how artists were influenced by their experience and life in the city. It was curated by Monique Barnett-Davidson, assistant curator.

There was no doubt that Barnett-Davidson is very passionate about the exhibit. As such, she gave a fantastic tour, revealing some previously unheard stories and highlighting works that never made it past the first commission phase.

The exhibition is divided into five themes. The first is 'Nature's Bounty', which looks at how artists have used some of the natural resources found in Kingston to make artwork. From there, it progresses to 'Cross Roads'; then to 'Art on the Streets', followed by 'Institutions and Collections', until it eventually goes into 'Stories to Tell'.

Interestingly, the exhibition ended at the screening room, where Perry Henzell's classic film The Harder They Come was being shown.

Among the patrons was Tobi-Ann Brown, who thought the exhibition was good.

"I think it is really informative. I love seeing this kind of visual path tours. A lot of things I did not know, especially in terms of street arts and statues that were commissioned by the Government."

Brown was also impressed by the musical performance, which she said was really great, especially with MacGeizmo's unique style of electronic mix.