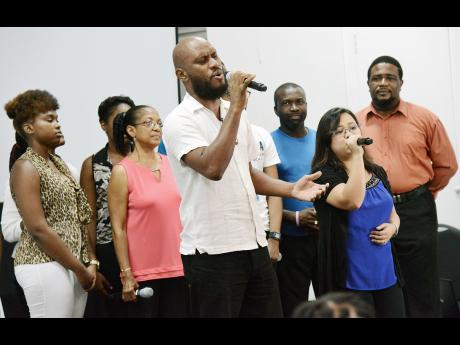 Rudolph Brown
Members of Father Ho Lung and Friends perform at the press conference and Launch of Moses Production at the Spanish Court Hotel in Kingston, recently. 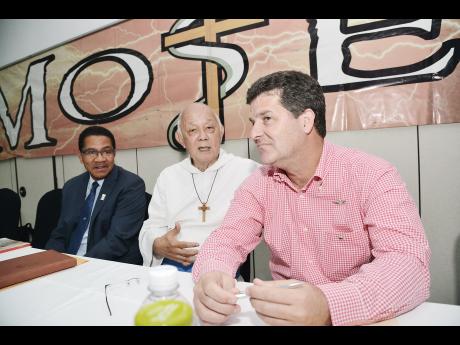 For those who experienced the spectacle and energy of Father Ho Lung and Friends' 2006 staging of the musical, Moses, the experience was unforgettable. So it was welcome news to learn that the epic drama would once again be used to minister for the poor on September 24-25 and October 1-2, 2016. There will also be the customary special shows for schools.

This was the information gleaned at a recent media launch and press conference, held at the Spanish Court Hotel. The top tier of the production team was also promising something special for this 2016 production.

"I won't give away all of them yet, but as you know, we have the parting of the Red Sea, we have the Ten Commandments. And this one (the play, Moses) has a few things, like the songs are very new and different. Very, very Jamaican and has an element of a deejay feel to it as well," director Greg Thames shared with The Gleaner.

"The Ten Commandments scene will be more dramatic and we are hoping that we have brought a new twist to it," he added.

Other changes were voiced by founder and producer Father Richard Ho Lung and the music director, Wynton Williams. The condensation of the pestilence scene from four songs to one, was the popular topic.

Father Ho Lung provided the reason for the change.

"I wanted to pull everything together so that it is a greater artistic expression ... with plenty of dancing."

The dialogue was rewritten, too. And Father Ho Lung said he wanted to make the entire story stronger, clearer and concise, as well as to bring out the inner character of Moses a lot more, so that persons could see his inner struggles with God.

Williams said the new song in the pestilence scene "has an interesting sound and rhythm, and I think it makes the whole show much tighter".

The talented cast of approximately 80 has a number of new members. And Williams will return as Moses and newcomer Kristen Emmanuel as Miriam.

But for the speakers on the engaging programme, giving their support was not because of the expected great spectacle and high entertainment.

Marketing and communication manager, Jamaica Urban Transit Company, Reginald Allen, said his organisation's involvement was about coming to the assistance of a very needy and established activity that, over the years, provided so much, and has instilled values such as being your brother's keeper.

Representing new sponsors Kingston Wharves Limited, CEO Grantley Stephenson applauded Father Ho Lung and the Missionaries of the Poor (MOP) for the work they have done to uplift the poor in communities in Jamaica and across the world.

Schools have, over the years, been the largest supporters of the Father Ho Lung and Friends productions. This was acknowledged in the form of a brief note of appreciation delivered by Grace Baston, principal of Campion College. She said the annual productions are creating students who are loving and intellectually competent.