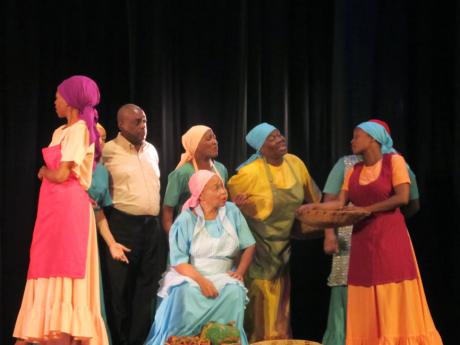 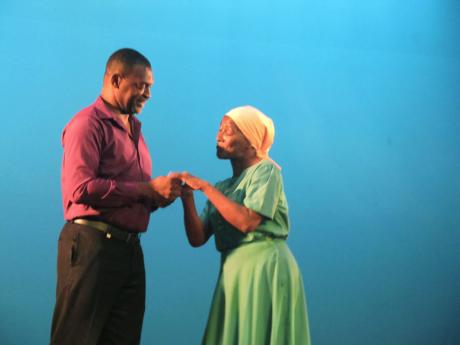 Marcia Rowe
From the scene 'Courting'. 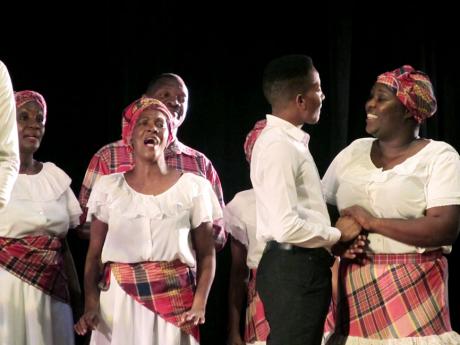 Marcia Rowe
From the scene 'Reconcilation'.
1
2
3

The 2016 season of the Jamaican Folk Singers concert was a pot pourri of Jamaican folk forms in song and dance. They were enhanced by colourful costumes and the effective use of set and props. All combined to tell an emotive narrative of love, celebration, infidelity, and community relationships. And the audience showed its appreciation through applause, laughter, and at times, by moving to the rhythm of the familiar up tempo beats.

Last Sunday's show was the second of two held on the weekend at the Little Theatre, on Tom Redcam Avenue (the other was held on the Saturday).

After the customary preliminaries, the unannounced "folk opera" programme began.

The first scene, In The Beginning, is set in the market. The curtains opened to reveal the singers brandishing the relevant props and moving in accordance. They delivered songs such as the up tempo mento beat Angelina and the slow tempo Eva.

Part One continued with the scene titled Courting, and songs such as Try Dear and Coconut Tree were used to continue the tale. It was followed by the scenes Community Affairs (Part 1) and Problems, Courting (Part 2), all clearly defined through the appropriate songs while costumes, set, and props changed with some regularity. But no doubt the most captivating scenes were Wedding Preparation and Wedding Day. Creativity abounded in the two.

The Wedding Preparation scene began with the musicians, who were otherwise placed in the background, now being presented as characters moving diagonally from down stage right to upstage left as the stage was transformed into a wedding reception. The males set the stage with tables as the females decorated them with flowers and the wedding cake. As they carried out their individual tasks, stories unfolded in the form of songs such as Biddy Biddy and Walking Down the Valley. Throughout the many activities, the talented group of vocalists remained very strong.

Preparations finished, the singers gradually exited, leaving the five musicians who were upstage centre to continue with the entertainment, as well as to add ambiance to the reception setting.

As the choir returned to the stage, attired in evening wear, greeting each other in song, Good Evelin and How De Do, the musicians made their way up stage left to continue providing accompaniment. The impressive scene ended with most of the cast dancing the quadrille in a true wedding fashion.

Intermission over, the dramatics continued in Part Two with the scenes Birth, Community Affairs (Part 2) Court, Flood Neva Stop One Smaddy, and the closing scene, Reconciliation. More costume changes and the use of set and props was on display too. Songs such as Melvina and Friday Mahnin were utilised to continue the dramatic narrative. In the scene Birth, the group dug into its repertoire of lullabies and delivered Bya and Rock De Baby.

But in life there is death, and this was captured in the scene Flood Neva Stop One Smaddy, with songs such as Bawl OOman Bawl and the song of hope, Bambury Dove.

Thereafter, the entertaining entrÈe ended with a celebration in the shape of a feast of folk dances such as dinki mini and quadrille to the up tempo songs Berry Low and Quadrille.