'Moses' is about the message - Father Ho Lung 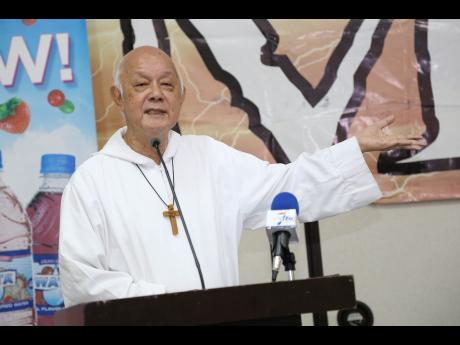 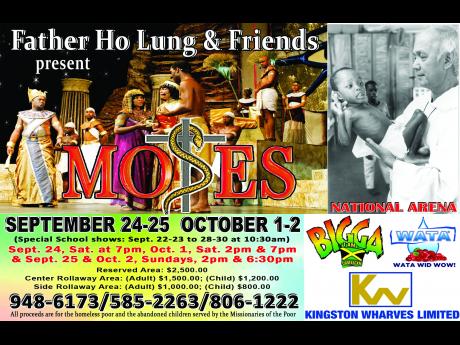 Father Ricard Ho Lung and his Missionaries of the Poor team are putting on the final touches for the highly anticipated return of their theatrical production, MOSES. But even as the opening day inches closer, Father wants the Jamaican audience to be reminded that although the production will bring a lot of fun and excitement to the stage, the biblical message should not be lost in the theatrics.

“Putting on shows like these is not purely for social purposes. It’s evangelisation. I tell people about what I believe in as both an artist and a man of God,” he explained. “The stories that come alive on stage talk about beauty, truth, goodness, and communicate the values and tell the incredible stories of people who are called by God. That should be the bottom line of the productions. Something should be left behind that is valuable and that people won’t forget.”

Ho Lung went on to explain that when writing the scripts for these productions, he thinks carefully about his target audience and tries to plot the stories in such a way that the ordinary man can see himself in the characters on stage.

“I’m bringing in some different types of elements into the production to make it more relatable to the Jamaican people. The production is more alive when the storyline is real enough for people to relate to it. I’ve brought in more music and some of the songs are even done with a dancehall kind of rhythm,” he revealed. “I wanted people to see the beauty of the life of Christ and the life of great men like Moses. Instead of reading the scriptures, these characters would come alive visually in the production with music and dance, and so on,” he explained.

Moses was first brought to the stage in 2004 and was a sold-out show. Father Ho Lung had no expectations for the play 12 years ago, but given the success it had back then, the head of the Missionaries of the Poor is expecting the return of the production to be just as successful the second time around.

“The first time I wrote the play, it was really marvellously received. I didn’t expect it to be so, but there were thousands of people who came out that sometimes, the venue was overpacked,” he said. “We’ve had sold out shows for all our productions so far, so we are expecting this one to be the same based on the past.”

Not keen on saying how much money he hopes to raise, Ho Lung told The Sunday Gleaner that he hopes the money raised from his latest project would be enough to cover his bills.

“It’s very costly to run our place. We get so much in kind, but we have to pay some serious bills like light, and so forth,” he explained. “We are hoping to raise enough money to continue our many programmes, which cater to the island’s poor and destitute.”

Revealing that it costs a great deal to put on productions the magnitude of Moses, Ho Lung expressed gratitude to the show’s many sponsors as well as persons who have volunteered their services.

“You wouldn’t believe how much things like these cost, but everybody comes together to help. People donate things like cloth and persons who do things like choreography and set designing, offer their services for free,” he said.

“The brothers work hours on end on the set and everybody just does it all for the sake of the mission. All this work is for charity and our volunteers enjoy giving back.”

Encouraging Jamaicans to come out and support the production, Ho Lung bragged about the time and effort that went into fine-tuning the details of each scene. He pointed out that the special effects in scenes such as the famous parting of the Red Sea, the 10 Commandments, and the Burning Bush will be something to look out for.

“As time went along, I felt I wanted to make the original production better, and so the music, the characters, and the dynamics of the action are richer this time around,” he said. “It took quite a bit more rewriting, the music as well as the script, but the audience will see characters like Miriam, who is the sister of Moses, being much more involved in the script. She’s going to be different from the Miriam in the original production and the Miriam from the Bible.”