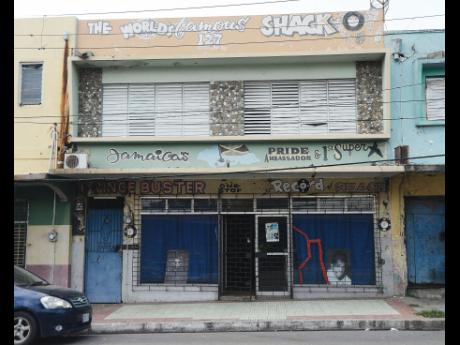 Ian Allen
Prince Buster Studio, broken into after his death. 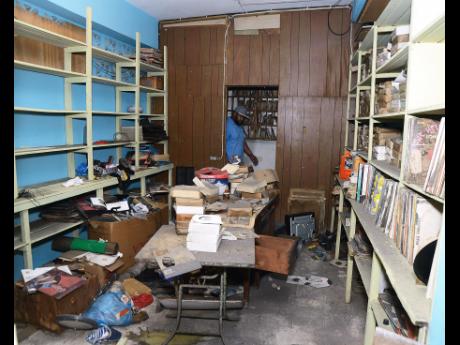 Ian Allen
Empty shelves on one side of a room where there are still some records emphasise hoiw much has been taken from a room at the 127 Orange Street premises owned by the late Prince Buster. 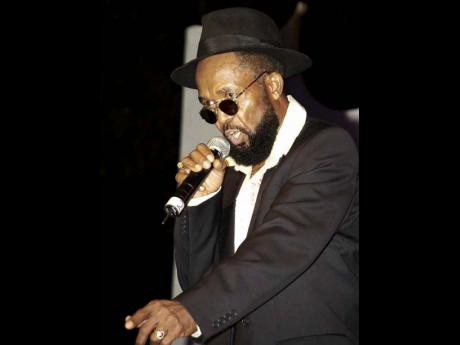 Today's column is a bit unusual, as it is a repeat of a story that was carried in The STAR last Friday. However, it is likely that there are persons deeply interested in Jamaican popular music who did not see that story, so I am taking the liberty of doing it all over again, not least of all because the family's appeal for the return of what has been stolen requires as wide an audience as possible.

This pillaging of not only the family's property, but Jamaica's music history, raises serious security questions about the feasibility of creating a music heritage corridor along the historic Orange Street, dubbed 'Beat Street'. Also, the timing of original publication was strikingly ironic - it was at the start of Kingston Music Week and just ahead of the celebration of Kingston being designated a creative city of music.

Look what they did

How easily we destroy the tangible manifestation of our creative intellect and hurt those who have achieved. And so, the story.

On the left side of the double glass door at the entrance of Prince Buster One Stop Record Shack, there is still a single sheet of paper announcing the late proprietor's death on September 8, 2016, secured firmly with transparent tape. Stepping inside an almost bare room, which was once a store well stocked with records and echoing with music, feels like a second death for the standout singer, producer, sound system owner, boxer, songwriter, and talking recordings pioneer.

The sense of loss is amplified by the mystified grief of Buster's widow, Mola Ali, son Ishaq Ali and sister, Doreen Campbell, who were assessing the damage at 127 Orange Street, Kingston, and grappling with coming to terms with the loss on Thursday afternoon.

Mola said repeatedly "Look what they did" as she and Doreen guided The Gleaner through a repeating story of scattered items and noting what is missing in several rooms on two levels. A grim-faced Ishaq said "Someone does so much for the community and this is how you pay them back."

"This is very devastating."

Among the missing items are seven air-conditioning units, numerous 45 rpm records and tape reels with Buster's original music, speaker systems, musical instruments, including a keyboard and guitar, furniture, including kitchen appliances, exercise equipment, a water tank and even barrels of clothing which would have been donated to charity.

The extent of the devastation is emphasised by two things the looters took - kitchen counter tops and a strip of carpet which was cut out - and things that were left behind - three plaques honoring Buster for his contribution to music.

And adding insult to the injury are two security items which were stolen - barbed wire from the roof and the surveillance camera system.

Also noting the volume but the sheer size of the items which were taken away and the effort it took to dig a grille from a wall and cut out air-conditioning units, Mola said "they had a lot of time to do this."

In addition, based on how many boxes and drawers were dug into, the recent widow said "they were looking for something."

Doreen was the first to come to Jamaica early last week, after receiving a phone call that the sheets of zinc were sticking up from the roof and were visible from the street. It turned out to be where the criminals gained access.

The mass theft was reported to the police, but it is unsure if the building's contents were insured. Also, it is going to take time to determine the money value of what has been taken. Last Thursday, Mola and Ishaq were seeing the devastation for the same time.

The building is one of four Buster owned in the area, emphasising his commitment to the community, Mola noting that he sometimes slept in a bedroom he maintained at the office. The theft raises another question, as Prince Buster had planned to start a museum and bed and breakfast facility there as part of a music tourism thrust in downtown Kingston. Now, not only has much of what would have been in the museum been stolen, but there are ongoing security concerns.

However, the family is determined to make the museum a reality.

"This is his dream, so we have to preserve it," Doreen said. Ishaq said "I want to know who did this and hold them accountable. We need the community to help us with finding out who did this."

There is an incentive for this, as they are offering a reward for information resulting in recovery of items stolen from Prince Buster One Stop Record Shack.