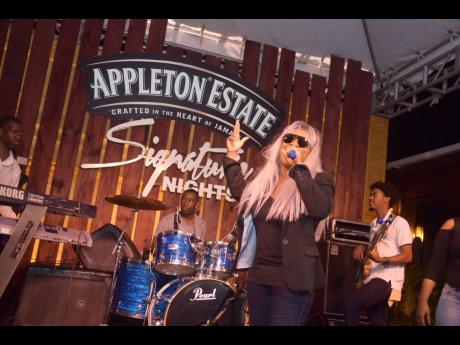 After not performing in Jamaica for more than a year, there was undoubtedly a hunger for Tanya Stephens' music, and fans who braved the inclement weather to attend her performance at the Macau Gaming Lounge on Thursday night left satisfied as she delivered one of the most tantalising, untamed performances of the Appleton Signature Nights Series.

Despite the rains, there was a full house at the open-air venue as patrons determined not to miss the rare opportunity of seeing the straight-talking singer live and in living colour came equipped with their umbrellas. Knowing all too well that Stephens would serve it up just the way they liked it - raw and unfiltered - patrons got exactly what they came for as the entertainer thrilled with every song.

The unapologetic 'tell it like it is' entertainer dropped a few expletives here and there as she touched on different topics including infidelity, politics, and relationships, but the audience didn't seem to mind as they were completely mesmerised.

As Stephens performed hit after hit, there was not a sad face in the house. The females were particularly pleased with her set as they seemed to agree with the messages in songs such as Tek Him Back, Damn You, Home Alone, and Can't Breathe, which encourages, among other things, 'a little cheating every now and then'.

Her set lasted just over two hours, and there was a little bit of something to be had for everyone. From anger to excitement to love to the pain you feel as a result of heartbreak, Stephens managed to evoke every emotion possible from her audience. Based on the loud screams that rang out at the venue, songs like Boom Wuk, After You, These Streets, Gangster Girl, Little White Lie and Still Ago Lose Him were clear crowd pleasers.

Members of the audience were so engulfed in her performance that at one point, when a light drizzle turned into much more, as the heavens opened up, but patrons were glued to their seats. Those who had their umbrellas quickly pulled them out, but those who did not, didn't seem to mind getting wet as long as Stephens continued to thrill them.

They enjoyed her performance so much that she had to spend some extra time fulfilling requests even after her official set had ended. It was during that request segment that fans got even more involved in the performance as they gathered to the front of the stage, singing along with Stephens as she satisfied their musical thirst.

The singer, having thoroughly enjoyed herself, too, it seemed, thanked the audience for being very involved and for braving the rain to watch her perform.

Stephens is the only female on the line-up for the Appleton Signature Nights series, which has already seen performances from Agent Sasco, Sanchez, Romain Virgo, and Tarrus Riley, among others.