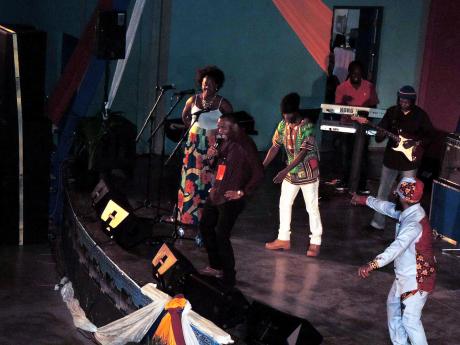 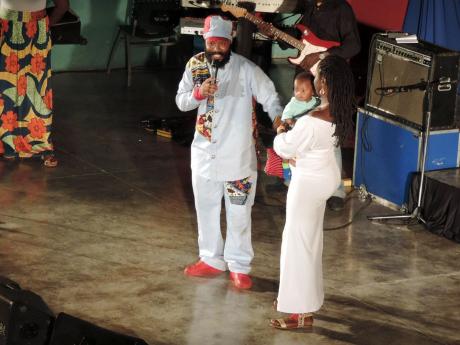 Mel Cooke
Warrior King introduces his wife and son on stage at the Karl Hendrickson Auditorium on Saturday night. 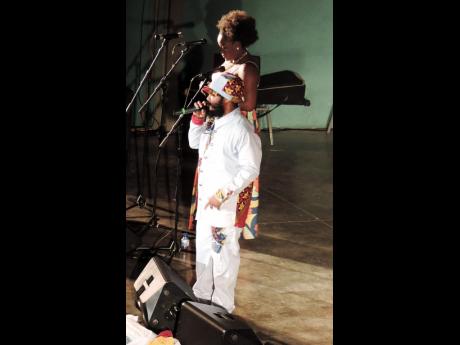 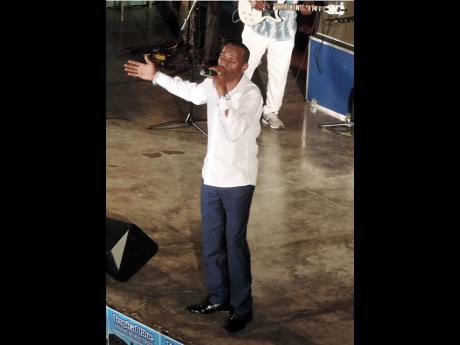 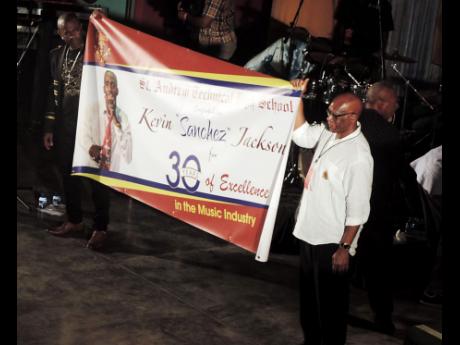 Mel Cooke
A banner in honour of three decades of musical excellence by singer Sanchez being held up on stage at the Karl Hendrickson Auditorium, Jamaica College, Old Hope Road, St Andrew, on Saturday night. 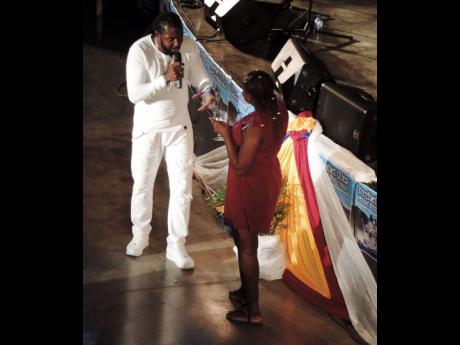 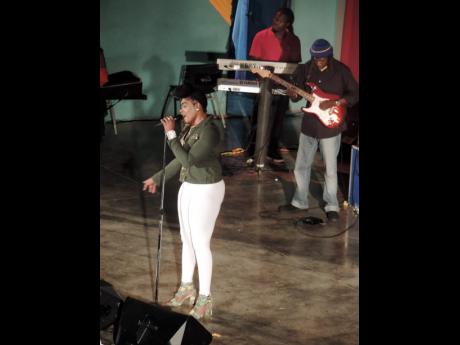 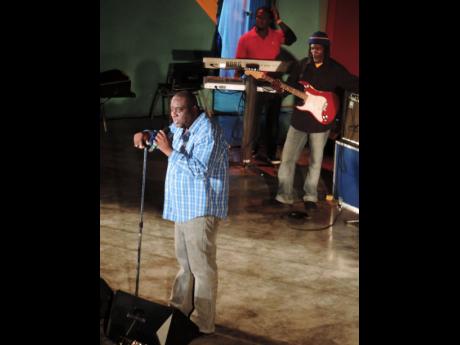 On Saturday night, Sanchez sang for his school, St Andrew Technical High, and his school put a song in his heart with an unexpected award for 30 years of musical excellence. A banner proclaiming the landmark was held on stage for the appreciable and appreciative audience, which had been transfixed by Sanchez's especially emotional closing Amazing Grace, to see and the man who was simply the student Kevin Jackson at STATHS invited back on stage.

His blue jacket, the first item to go when he began over an hour's standout performance, was back on as Sanchez listened to a rundown of his career, including recording Lady in Red in 1987 while a STATHS student. He held the trophy he was given high and said, "This is worth more than money tome", as it was an honour from his school, which his children and grandchildren would be able to see and hold.

Sanchez's spoken response to being honoured was brief; his sung reply spoke volumes as he did You Raise Me Up as he had during a set which covered the R&B of Let's Get it On, lovers rock of One In a Million, reggae gospel of Praise Him, the Sunday morning "fire" medley of Christian favourites and tributes to Tenor Saw, Sugar Minott, and Gregory Isaacs, among others.

The second time around, though, it was done without music, the band having left the stand during the tribute, Sanchez's voice carrying the song and his message clearly as he concluded that it was to God first and his fans second.

Another anniversary was observed, 20 years since STATHS won the Manning Cup, and members of that team gathered on stage to present the principal, Rayon Simpson (who graduated from STATHS 20 years ago), with a $100,000 contribution towards the school.

Simpson was not billed as a performer but from being urged on by Warrior King to do movements from a wagging foot to hip wiggling as he chanted to mopping the stage before Sanchez performed, he was as much a part of the action that saw the SANE Band performing (a pair of Peter Tosh classics in their set then supporting a number of performers.

It was a night of fewer performers and more extended sets which, in the main, worked well for an audience that occupied about 80 per cent of the chairs before the stage, no one taking up the balcony chairs available. Nateesha Stream, the sole female solo vocalist on the line-up, encouraged "keep your head up sister" and paid respects to the Gong with Turn Your Lights Down Low. A very energetic Hawkeye took a foray into the audience, where his all-white outfit stood out as he urged the crowd into call and response, songs like Bubble and Wine interspersing extended lyrics.

An engaging Admiral Bailey said that he was not a deejay anymore, but an entertainer, and it would take a finicky assessor to dispute that. From wide-eyed facial expressions to kissing sounds as he encouraged the men to romance their ladies, a twitching left leg and pointed forefinger as he did Della Move, the Admiral delivered Think Me Did Done and Jump Up, among other hits, to an overjoyed audience - and he avoided lyrics that would have been inappropriate for 'schoolers'.

After an intermission, Mega Banton's extended performance was observed by a cool audience as he chose to do a raft of lyrics before popular songs like Sound Boy Killing. His take on Buju Banton's Driver A was a rare spark - and the tumble that Tanto Blacks took as he moved frenetically when invited on by Mega Banton caused howls of laughter.

Principal Simpson was not Warrior King's only guest as he invited on his wife and their child, doing jumping jacks and push-ups before performing to them, his signature song, Virtuous Woman striking a chord with the audience.