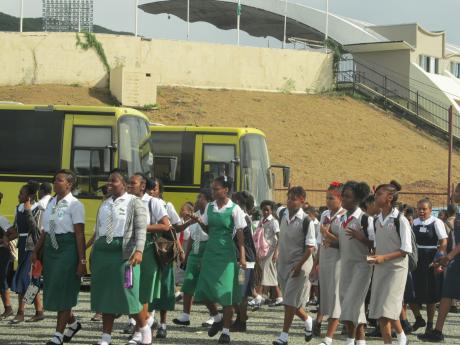 Marcia Rowe
Students of May Pen High School and The Queen's School.

It was the second day and the second matinee of the Missionary of the Poor's (MOP) 2017 production. The musical, Queen Esther, had just ended and students were making their way to their assigned JUTC buses, transforming the National Stadium car park into a patchwork of colourful uniforms.

"I learned a lot. It [the musical] opened my eyes to what people can do, and good can overcome that," said Javoan Davy of May Pen High School, located in Clarendon.

First-former Troy of St Georges' College, who was attending a Father Ho Lung and Friends production for the first time, thought it was very educational.

His schoolmate, Mallachie Spence, said his reason for going to see the production was three fold. His teacher told him that the play would be interesting; his contribution would help to raise funds for the poor, "and that we can learn about the Bible". But first he had to overcome the obstacle of getting his parents to give him permission to go.

Their teacher, Andrea Smith, who has seen a number of the productions over the years, added another reason: "To expose the students to the different areas of the arts and also learn about moral values. It is not just a play; Esther maintains her integrity and that is something you can teach young people."

But, by far, Campion College had the largest number of students in attendance on Friday.

"About 800," according to religious education teacher Ingrid Robinson, "Campion is known to be one of the best supporters of the Father Ho Lung shows, and that is because of our principal [Grace Baston], who encourages this sort of thing. So we always have a good turnout."