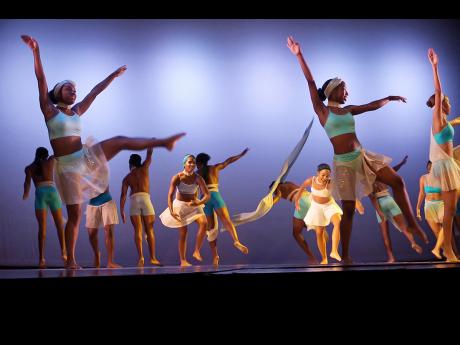 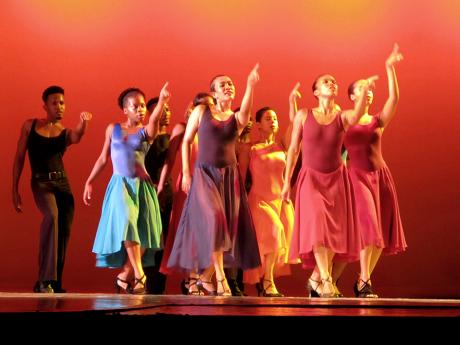 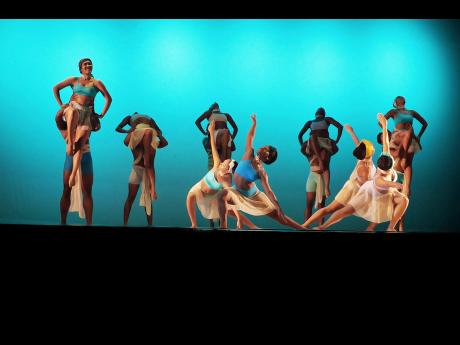 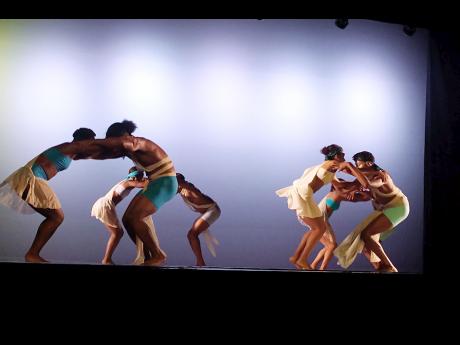 Marcia Rowe
'Streams' choreographed by Tony Wilson, being performed at the Little Theatre during The Company Dance Theatre's 29th season over the weekend.
1
2
3
4

Known for excellent body extensions, great precision and uniformed movements, The Company Dance Theatre continued the trend on Saturday at the Little Theatre, Tom Redcam Avenue, in their 29th Season of Dance.

The works on show were choreographed by Renee` I. McDonald and artistic director Tony Wilson. They were aided by a cadre of fine dancers.

Wilson choreographed four of the six dances. His 2013 'Journey' was the curtain opener. The dance is divided into four movements that were clearly defined by excellent lighting. For the first and fourth movements, the entire company of dancers leapt and reached with ease, while moving in and out of various formations. They did so with captivating accuracy.

However, the magnetic moment of the dance came in the third movement with soloist Steven Cornwall. Cornwall was a picture of motion, moving effortlessly, exploring various levels in an amazing display.

He gave the small house another mesmerising performance along with Courtney Payne. This time, it was in Wilson's 2002 Silhouette. The chemistry between the two dancers was unmistakable. With a few risque moves, they danced the courting lovers into life.

And, largely, the jazz piece had Wilson deviating from his signature costume designs of limited covering was well performed by the other dancers.

Wilson's The Web (2016) and Streams (2005) were also on the programme. The Web was well performed by six dancers while 'Streams', the closing piece, had the entire company dancing. Rochelle Kamicka led The Company with a convincing performance. It was the only dance that utilised props, in this case a wide symbolic sheet of fabric.

McDonald's Surge was the only new dance on the show. Dancers Cornwall, Kamicka, and Payne were joined by Gabrielle Miller and Azariah Jones to bring another of the choreographer's metaphysics-of-presence dances to life. The dancers and choreographer were on the same page and thus gave a great performance.

In 2014, McDonald delivered metaphysics of presence through dance when she choreographed 'Divulgence'. The remount on Saturday was just as engrossing, from the interplay between light and darkness, the black long dresses worn by the dancers to their screams towards the end.

The Company Dance Theatre's 29th Season of Dance opening show was a great one.