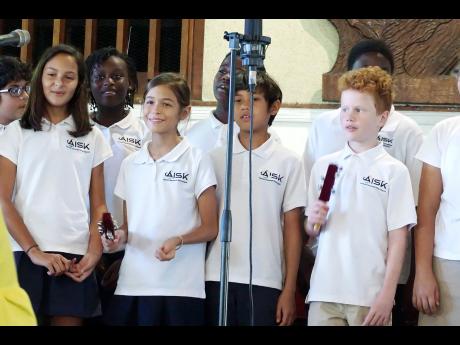 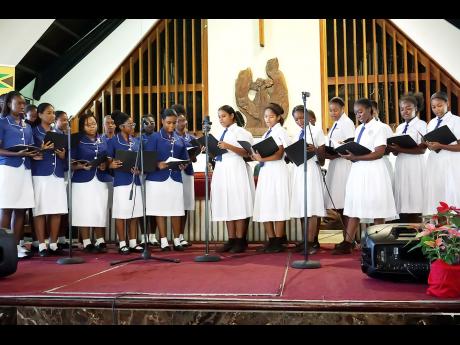 The adage 'music is a universal language', became a reality in the spacious Webster Memorial United Church, Half Way Tree Road, recently, when students of various Jamaican schools came together to spread the joy of Christmas through songs and scripture reading. And they did so in Spanish.

The intriguing midmorning programme for 'Christmas in Spanish: Out of Many One Language' was organised by the Embassy of Spain and the Spanish-Jamaican Foundation.

It began with welcome from the Ambassador of the Embassy of Spain in Jamaica, H.E. Josep Maria Bosch Bessa. He later told The Gleaner the most beautiful thing is that music and language are used to bring people together.

"It is the best way of uniting us. It is a beautiful combination to bring together Jamaicans with the Spanish-speaking countries."

Nine scripture readings were alternated with traditional Christmas songs from Spanish- speaking countries Dominica Republic, Colombia, Mexico and Spain. The scriptures were read by a few ambassadors of the respective countries and students of various schools.

Among the audience was Reverend Kenneth Richards, the Archbishop of Kingston.

He admitted to speaking only little Spanish, but knowledge of the stories helped him to figure out what was being read. He enjoyed the musical item from the Promise Learning Centre and the Alpha Institute performing La Marimorena, a Spanish traditional Christmas song.

Margaret Little Wilson, who never did Spanish at school, said having the words of the songs and scripture reading printed, helped her to follow the programme.

"It was very good, I was able to pick up one or two words along the way," she said.

According to Carmen Rives, deputy head of mission, the idea for staging the concert was to offer an opportunity to immerse Jamaicans in Spanish, given the Jamaican Government's commitment to teach Spanish in primary schools, and to show that Spanish is a diverse language, from Spain to Latin America and the U.S.

Project manager of the Spanish-Jamaican Foundation, Vanessa Meggoe, said while the concert is in its 11th year, the format of having the embassies of the other Spanish-speaking countries go into schools and teach a carol from their countries to the students, started last year.

"By doing so, the students get to interact with a native speaker and the whole full experience of learning about the culture," she said.

She also explained that the inclusion of special educational institutions like Genesis Academy and Promise Learning Centre helped to highlight the talent of all the children, irrespective of where they were from, whether they have challenges or not.

There are plans to expand the project, but the challenge is to get students to the venue. So for now, only schools with transportation participate.

"We would like to enlist the students outside of the Corporate Area, but there is the issue of transportation," said Meggoe.