Jackson honoured for contribution to music 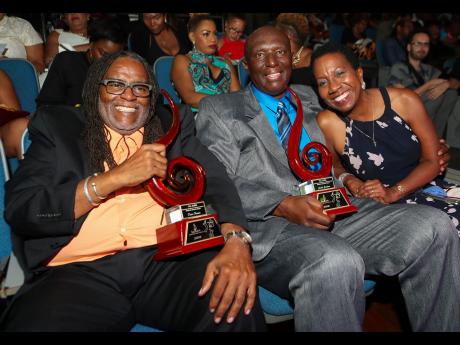 Reggae musician and bass player extraordinaire Clifton 'Jackie' Jackson was on Sunday night recognised for his decades of distinguished contribution to the music industry at the annual Jamaica Reggae Industry Association (JARIA) Honour Awards in Kingston.

The event, staged at the Courtleigh Auditorium, saw Jackson being awarded for exceptional contribution to the reggae industry. He shared the accolades with veteran saxophonist Dean Fraser, who also received an award in the same category.

The award to Jackson, the husband of Jamaican songbird Karen Smith, was presented by fellow music industry stalwart, JARIA lifetime member, producer and fellow bass player, Glen Brownie. Jackson, who is from a musical family, has been playing instruments since his teenage years when he first played the piano. He featured in early recordings with several reggae artistes, including Alton Ellis, The Melodians, Desmond Dekker, and Toots and the Maytals.

A former member of the band, the Supersonics, Jackson is also a Grammy Award recipient, copping that global honour in 2005 with Toots and the Maytals for Best Reggae Album. He has been bestowed with the Order of Jamaica (Commander Class) by the Government of Jamaica for stellar contribution to the music industry.

"It is nice to know that you are honoured in your own country, and while you are alive," Jackson said. He said that the honour was significant coming from a Jamaican organisation. His message to younger musicians is to play from the heart and be humble in their profession as humility will assist in their advance in the music industry.

Karen Smith, who described herself as his biggest fan, said the award was well deserved. "He has worked very hard and continues to work hard. I am very proud of him," she said in an interview.