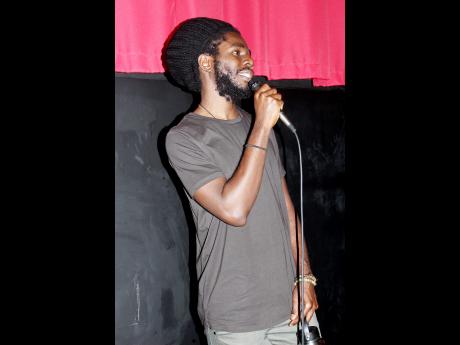 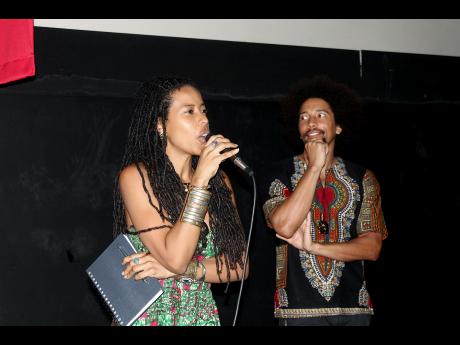 Stephanie Lyew
We Will Rize Together members Donisha Prendergast (left) and Chakabars Clarke speak at the 'Black Panther' special screening at Carib 5. 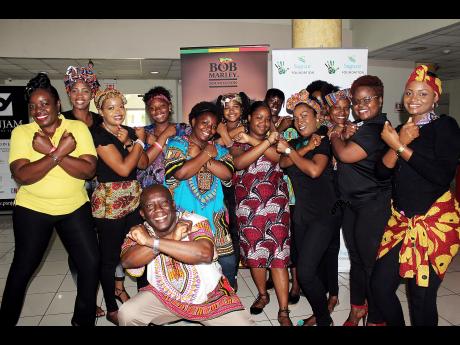 A number of local personalities have already jumped on the 'Wakanda Wagon' by staging parties and private screenings or donating to charitable causes for children to watch the Black Panther movie. Dancehall artiste Popcaan donated $100,000 for children at the Walker's Place of Safety to watch the movie after accepting a challenge to give the gift of allowing someone to have the Black Panther experience.

Chronixx, Donisha Prendergast and Chakabars Clarke, members of We Will Rize Together, have followed suit but with a more hands-on approach, using the Marvel Studios production as an educative tool for youth from inner-city schools in what they have dubbed the 'Take Me To Wakanda Initiative'. The film, which has surpassed US$1 billion at the box office globally, features a highly advanced African kingdom with the power to use knowledge and tools to improve the world.

"Jamaica has a very special place in world history for many reasons, and we can't leave it to the legacy of Bob Marley and Marcus Garvey alone. The Black Panther movie is more than just entertainment because it shows us all the things

we can be in this world," said Prendergast. "Chronixx is a musician, Chakabars is an activist and sports trainer, while I am an actress and film-maker. We occupy different spaces in the world, but it really means that every space we occupy today, we should be able to look at it as Africans in the diaspora."

Approximately 700 students, along with their chaperones, from the Haile Selassie, Tivoli Gardens and Denham Town high schools in Kingston and the Spot Valley and Green Pond high schools in St James were selected to watch Black Panther at the Carib 5 and Palace Multiplex cinemas recently, each person provided with popcorn and a soda.

The students were selected because of their socio-economic background, where they live, and, by extension, what they're exposed to. And, according to the organisers, the history of the Haile Selassie High School, in particular, shares similarities with a particular scene.

Sharon Roper, founder of SIAN Associates, told The Gleaner that her team was immediately sold on the idea of getting the students to see the movie and says that it was very fitting to coordinate with We Will Rize Together. Prior to seeing the film, the students prepared short creative pieces (dance and music) to demonstrate their expect-ations. Panel discussions are held following the screenings.

"If we apply the digital arts, videos and technology mediums like this to impart knowledge and information, we will find that a greater connection is made to that information," Roper said. "We wanted to have dialogue about some parts of our education system using the digital platforms where our youths and people in general spend most of their time," said Prendergast. "The initiative is for them to apply the lessons in their school coursework and for the teachers to develop lesson plans that include class discussions and essays about what they have learnt from Wakanda."

Similar to Black Panther being set in Wakanda, an imaginary African nation that was never colonised, the organisers said that the students should recognise how much can be achieved while re-imagining themselves, embracing African history, identity and a space to create greatness.