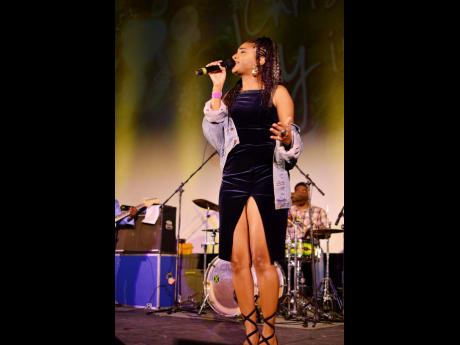 Like her parents Tommy Cowan and Carlene Davis, Naomi Cowan is immediately associated with gospel music. Her mother and father's music careers began at the cusp of reggae and dancehall's international popularity, before the couple dedicated their lives to Christianity. Raised in the faith and expected to take on a similar path, Naomi has opted instead to pursue a career in what many religious people label 'secular' music.

"I think sometimes we complicate Christianity. Just because of my Christian belief, it doesn't mean I can't sing messages that aren't Christian. [It is] my choice to do what we call 'secular'; I prefer the word 'mainstream'," Naomi told The Gleaner.

"I know what the word 'secular' means, but it has such a negative connotation, so I prefer 'mainstream'. It's not coming from a place of rebellion. It's not that I'm trying to prove I'm different and I'm not exactly like my mother - it has nothing to do with that. It's not about me getting fame, because there are so many other ways. My whole purpose behind being a musician is about people," the young singer explained.

Before going into gospel music, Tommy Cowan was a member of The Jamaicans, which won the 1967 Festival Song Competition with Ba Ba Boom. Davis' popular pre-gospel songs include the romantic Going Down to Paradise.

The decision to dive into the mainstream arena was driven by Naomi's desire to reach as wide an audience as possible with reggae music. "I thought about it, I prayed about it, I prayed about my audience and I realised I wanted to make music that could transcend barriers and borders, make music that could reach anybody. Reggae is probably one of the only genres that no matter where you go in the world, people hear reggae and their hearts respond in the same way. It brings out something out of people that I don't think I've seen it in any other genre," she said.

Naomi clarified that gospel music also has the scope to transcend barriers and borders, however, "if you keep it practical, it is a very specific genre that brings you into very specific arenas. Truthfully, my music is always gonna be inspired by God, no matter what. It may not necessarily be a song about Jesus dying on the cross. But Jesus didn't die on the cross just for us to sing about him dying on the cross," she explained.

With both parents still heavily involved in the local gospel music industry, Naomi reports they are in full support of her mainstream aspirations. "They are very supportive and actually very excited. which is why they come out to events when I perform. They see I have a solid foundation and I'm entering what many would consider a dangerous place. But because I have that foundation, they know that I'll make a difference. There are so many ways and paths I could take, but when I honed into the reason why ... music was my answer, the best way I can reach as many people as possible in a positive way," she said.