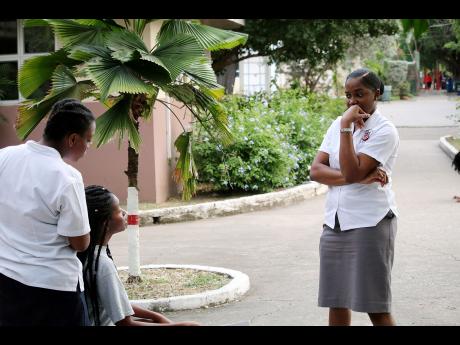 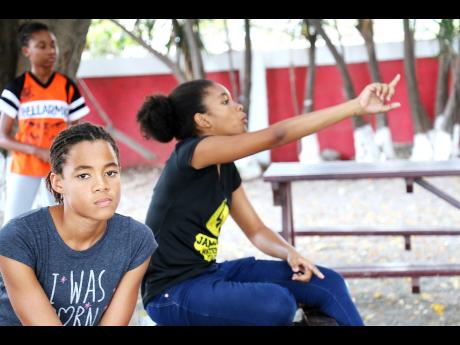 Yendi Foo (arm extended) directing a rehearsal of ‘A Midsummer Night’s Dream’ at Campion College’s Duck Pond on Saturday. Beside her is Sabrina Kyn. 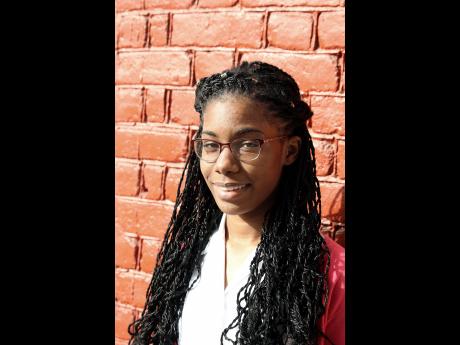 Contributed
Jhenelle Saunders, who is directing 'The Seance' at Campion College's Courtyard Theatre on Saturday.
1
2
3

Perched on a bench in Campion College's Duck Pond, Yendi Foo is in a peculiar position - figuratively. As she gesticulates in amplifying her verbal instructions to the student thespians, she is directing in an abridged version of 'A Midsummer Night's Dream', her sibling is among those who fall into position at Foo's request. The third-former tells The Gleaner, "it is sort of weird, especially as my little sister is in the play. At first, I was trying to find a balance. At rehearsal, I don't know them, they are actors," she said. "It is still a little bit weird."

Still, it does not hurt that Foo has demonstrated her capability as an actress, The Taming of the Shrew among her credits.

"It gives me an advantage. I know where they are coming from and when they feel unsure."

Foo is one of four student directors whose productions will be on at Campion College's Courtyard Theatre 2018 on Saturday, March 24. The others are her co-director Shae-Devaughn Ellis; Annakay Hudson, co-director of Belly Woman with drama teacher Damion Radcliffe and Jheanelle Saunders (The Seance).

Radcliffe points out that there are a number of 6A students, who are closing in on the end of their time at Campion, performing at the school on Saturday. Among them are Saunders, Hudson, Christina Emmanuel, Christian Roberts and Chris-Ann Knight.

Emmanuel, who plays the female lead (and title role) in Belly Woman, puts her extensive and well-recognised acting exploits in the context of her overall development.

"I am still kind of shy. I was extremely shy, acting helped me to be more self-confident in the classroom setting, talking to teachers and my peers. It has propelled me to do things that previously I thought I could not do," Emmanuel said.

Even though she has been acting since grade six at the primary education level, the process is not taken for granted. Emmanuel says "there is always hard work in developing character; but after the hard work, when you look back, it is a happy moment, proving my doubts wrong."

So, as an actress, Emmanuel says, "I love being able to tell someone else's story and being able to change certain aspects of myself to portray whichever character I am playing."

Being involved in theatre also has an effect on Foo off the set.