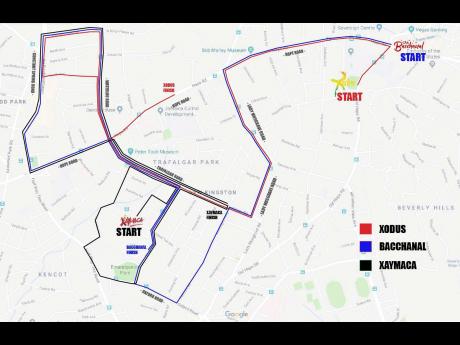 It is Carnival Sunday, and as is customary, the road marches take place across the Corporate Area today.

As revellers get ready to flood some of the major roadways across the city, the police are advising the motoring public that several traffic diversions will take place throughout the day. To allow each of the three bands participating in Carnival this year to make their way through the city, several roads will be closed off to vehicular traffic at different intervals today.

The traffic interruptions are expected to start from as early as 8 a.m., and will mostly affect roadways in and around New Kingston, Liguanea and Half Way Tree.

According to the Jamaica Constabulary Force's communication arm CCU, Hope Road, Knutsford Boulevard, Trafalgar Road, Waterloo Road, Eastwood Park Road and East King's House Road, are all expected to be affected throughout the day. The JCF wants to remind the public that while the road closures may cause some level of inconvenience, this will be minimised as the closures are temporary. As soon as the bands make their way out of an area, the roads will re-open to motorists.

The JCF says police personnel will be deployed at various points along the routes to direct traffic and are urging motorists to obey the instructions of the law enforcers.

The Sunday Gleaner has obtained a copy of the routes for each band. Here is some useful information on all three.

Bacchanal Jamaica is expected to kick start their march at Sovereign Centre at 10:30 a.m. They will make their way to Hope Road/Lady Musgrave and on to Montrose. From there they will head to Trafalgar Road and on to Old Hope Road. They are scheduled to also traverse Knutsford Boulevard, Waterloo, Trafalgar, Constant Spring Road, West King's House Road and Half Way Tree, before ending at the Lime Golf Academy at approximately 6 p.m.

Xodus, the third band on the road for the day, are expected to start their journey at 10:30 a.m., by Tastee in Liguanea. Revellers will then make their way past Sovereign Centre on to Hope Road/Lady Musgrave. From there they will move past the BMW headquarters, where they will have lunch before heading to the Trafalgar Road area. Waterloo, Constant Spring, West King's House roads and South Avenue, are also on the Xodus route, which is expected to end at the Ranny Williams Entertainment Centre at 6 p.m.