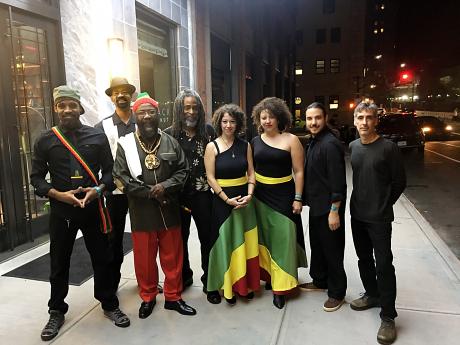 Singer Denroy Morgan did the 1981 smash single I'll Do Anything for You. Some of his 32 children are in the Grammy-winning band Morgan Heritage. As a member of the Ethiopian Orthodox Coptic Church of North and South America, Morgan is acutely aware of the empowerment ganja potentially holds for Rastafarians and others and feels that now, there is a great need for more bands with a focused message to showcase music in a serious, professional, creative and disciplined light. With this in mind, he has revived Black Eagles, a band he first formed in the 1970s in the Bronx, USA, by placing an ad for musicians in the trendy Village Voice newspaper in New York.

Morgan is still the glue that connects the glorious past of the 1970s Black Eagles with a new millennium vision for the future. This time around, much of the creative energies of the band are being driven by a young front man, a trained and experienced musician from Nyack, New York called Ianbassa.

He is an award-winning music graduate from the University of Bridgeport in Connecticut, a songwriter, a vocalist and a player of the saxophone and guitar. He has five years of touring experience in the New England region and has been passionately grounded in reggae and dancehall since high school. With roots in Jamaica, the Dominican Republic and Haiti, his musical vision is pan-Caribbean. Also in the band are a full Jamaican, an Italian and a Latina.

"It is my hope that the band will embody the divinity of His Imperial Majesty Emperor Haile Selassie 1, King of Kings, Lord of Lords and The Conquering Lion of the Tribe of Judah", Denroy Morgan declared. "Experiencing a performance with Black Eagles will be a full-bodied spiritual elevation."

In addition to taking on studio recordings, a full tour schedule and providing backing for professional artistes, another important part of Black Eagles' mission is to promote the medicinal and sacramental uses of ganja. Accordingly, the band's marketing strategy includes the targeting of cannabis festivals across the United States for live performances.

The band's first single will be Super G Man, a celebration of and tribute to the therapeutic properties of ganja. The song was written by Denroy Morgan and Jammie Desire, with a Super G remix that will feature Laza Morgan. The planned second single is Sweet Collie Herb, written by Ianbassa, about the sacramental properties of marijuana. Both songs will be on the ASAPH/ VPAL label.

At the first audition for the 1970s Black Eagles band, musicians from many nationalities showed up. The band toured for six years across the Midwest and along the Atlantic Seaboard in the United States, and, over time, more Jamaicans joined the band. They eventually replaced the Italians who were some of the original members. Morgan was the bandleader and took care of all aspects of the management of the band until it was dismantled just before he exploded with his chart-topper.