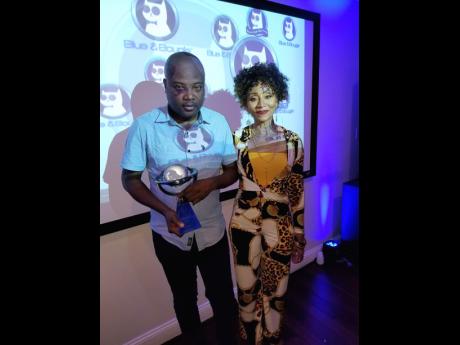 As sunset fell on the Hudson River in New York last Sunday, hundreds of music lovers scurried to find the perfect spot at Hastings on the Hudson , a sprawling, luxurious riverside venue to enjoy Blue & Bougie.

The party started just after the FIFA World Cup Football final ended, and New Yorkers were in search of a fun-filled evening Jamaican style. Some came to enjoy reggae music by the river, while others came for the mouth-watering seafood fare catered by The Ultimate Grill. But it was reggae thunderbolt Nadine Sutherland who elicited rousing applause and jaw-dropping admiration as she set the venue on fire with hit after hit, winning over scores of new fans in New York City, where she now resides.

Sutherland's electrifying performance should not have come as a complete surprise. She has had a long and illustrious career and has been the recipient of a number of recent music awards.

Blue & Bougie was her first major New York City performance in several years, and she thrilled the audience as she moved through her impressive catalogue, starting with Wicked Dickie, her duet with Buju Banton. Nadine continued with Baby Face and then did a tribute to reggae icon Buju Banton, sharing some personal anecdotes about him along the way. The audience soaked up every moment like a sponge. She followed up with Untold Stories, one of Buju's popular songs, one that almost brought her to tears before she brought the house down with Action.

"I was shocked by the huge crowd and the number of phone cameras that were capturing me", Sutherland said after her performance.

She added, "They were clearly happy to see me based on the sustained applause, and when I started to dance during the performance, the crowd went wild."

Sutherland was backed by Derrick Barnett and his band. During the event, Jamaica's premier disc jockey Kurt Riley was honoured by the event's executives for his unwavering contribution to reggae music, globally. Christie Barber from VP Records was also honoured, but The Gleaner understands that her award will be presented at Reggae Sumfest in Montego Bay.