Richie Stephens' mission to save ska 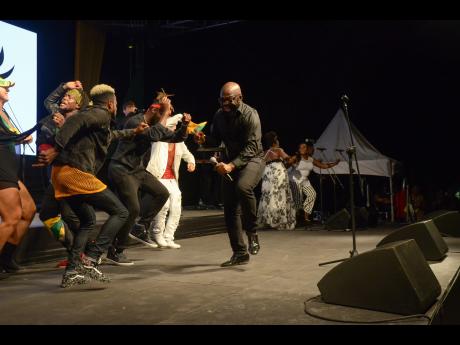 Shorn Hector
Richie Stephens perfoming at the Ranny Williams Centre on Saturday night on his mission to bring back ska.

Richie Stephens says he is saddened by the absence of ska on Jamaican's musical platforms.

“We are not celebrating our music here, and it saddens me. I think there is a place for it. It is a well rated music, put ska on a jazz festival and it still holds up, you can put ska on a rock festival and it will hold up. Every where I go in the world they are playing it and celebrating it and playing it in parties and dancing to it. I do not see why it can’t happen in Jamaica,” he bemoans to The Gleaner.

He believes that the reason for removing ska from the musical radar is because “we are a trendy set of people - we like to follow trend and move from what is not hot any more, which is the mistake that we are making. So my whole idea is to reintroduce this music on the local stage.”

His mission started after a chance encounter with members of the Italy-based Ska Nation Band.

“I went there (Italy) on a tour and I met the guys who were the promoters of the show - Casalabete Music Festival. We started discussing how great the genre (ska) is.”

Subsequently, they asked him for a vocal a cappella of one of his songs to do a remix.

Stephens was very impressed with the remix and, after doing a few songs together, the idea of them playing for him in Europe came up.

“I said, 'let's do a project and do an album', and we have been together for three years.”

The album is entitled Root of the Music, and features a mento song - Country Bus; as well as ska songs in Italian such as O-sole-mio (Oh My Son).

Stephens said singing in Italian is a whole new world and a new look.

“I like to challenge myself, and I was having fun doing it in the studio, but more fun on stage.”

Among Stephens' plans to promote ska in Jamaica is by performing on some live shows. Their next performance in Jamaica is slated for October 27 in Negril, Westmoreland. He also wants ska songs to be played in mainstream media again.

“I am hoping that all that we are doing now will catch on enough to inspire some young people and let them know it is cool to play ska, because a lot of bands around the world are not old people playing ska, but young people.”