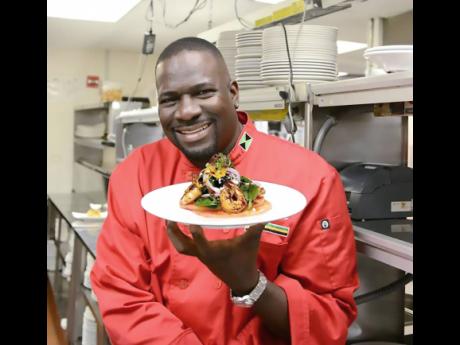 Jamaican celebrity chef and contemporary gourmet guru Patrick Simpson will turn up the heat in New York on Sunday, March 10. The chef’s creativity will be on display at the next edition of Blue & Bougie, a lifestyle reggae party that takes place at the Wainwright House, a sprawling, lavish château-style stone mansion in Rye, New York, overlooking the waters of the Long Island Sound.

The Wainwright House is not without a star-studded history. American icons like John D. Rockefeller, JC Penney and Dwight D. Eisenhower have been connected with the private hideaway during the last century. Chef Patrick Simpson will write a new chapter in the mansion’s history when he dazzles a few hundred discerning reggae guests, all dressed in various shades of blue, with gourmet temptations from a specially created menu.

Blue & Bougie is an early-evening event, from 4:30 to 10:30 so the fare is heavy hors d’oeuvres and platters. Among the options are Guinness glazed chicken skewer, fish taco, tomato bruschetta, truffle macaroni and cheese square, jerk pork, steamed bun and mini chop salad.

Chef Patrick, as he is known around New York, hails from the Garden Parish of St Ann, where he attended Marcus Garvey Technical High School. He later joined the staff at Club Caribbean in Runaway Bay, and his remarkable skills took him to Royal Caribbean Cruise Lines, Red Lobster, B.B. King’s Blues Club & Grill (NY), as well as to Negril Restaurant in New York. In 2016, he launched a line of seasonings and sauces, and last year he made début appearances on The Cooking Channel.

Music for this edition of the Blue & Bougie party will be provided by DJ Madout and DJ Dubmaster Chris. Formal attire is required – any shade of blue – and guests are urged to avoid hoodies, sneakers, gym clothing and shorts. Live performances in the past have included rapper Safaree and reggae songbird Nadine Sutherland, and the event has previously honoured party animal Kurt Riley and music industry executive Cristy Barber.

“Great food, premium entertainment, an elegant ambience and reggae-loving guests are a big part of the success of Blue and Bougie. Each party has its unique flavour and is entirely different from the last and the next, and we are certainly looking forward to the culinary magic that Chef Patrick will being to Rye, New York,” Jerry McDonald, one of the Blue & Bougie’s directors, told The Gleaner.