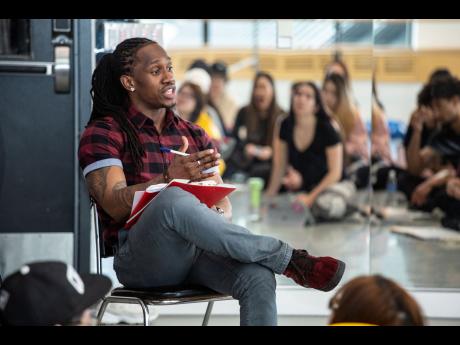 At 30 years old, Mikhail Morris has compiled an impressive repertoire, one that continues to stun even him. A street dancer, his career officially took off when he competed on talent show Dancing Dynamites and placed second on his second attempt. Morris was subsequently set on a path that led him through college, training with international dance companies, and, eventually, opening his own company. Now, the street dancer who started out with no formal dance background is lecturing a two-credit dancehall course, of his design, at the Simon Fraser University in British Colombia.

The most stunning factoid in this success story is that Morris accomplished all this without passing any subjects in CXC.

“When I should have been focused on my subjects, I was focused on training for Dancing Dynamites. I didn’t care about the intellectual aspect of things. I don’t have English and math. No CXCs. I didn’t think 10 years down the line, I would be here. I got qualified enough to become a lecturer and now grade papers for a two-credit course,” Morris told The Sunday Gleaner.

He went from feeling out of place in undergraduate classes he never imagined he could be part of to intensive training with the Collective of Black Artists (COBA) in Canada, to opening his own company called Ketch Di Vybz in British Colombia, to becoming a lecturer. The journey really began for Morris in 2008 when he was offered a scholarship to the Edna Manley College of the Visual and Performing Arts (EMCVPA) through Dancing Dynamites. There, he studied traditional folklore, modern dance, and classical ballet training, but, while attending college, there were challenges. The street dancer was surrounded by technically trained dancers, and he was also financially strained. “Opportunities were always presenting itself, but the financial aspect was an issue. Sometimes, people would have to help me with lunch. One of those persons was Marlon Simms,” he revealed.

“I have never met anybody so passionate and with a hunger to learn. He didn’t study formally, but he went into a class with people who had modern-dance training and got the highest grade in modern dance in year one. He was a joy to teach,” Simms told The Sunday Gleaner.

What Simms is most grateful for is the example Morris has set, proving that there is economic value in dance. “Dancers are discovering that they can make a living from it. They can teach it, study it, choreograph it, they can provide a course. People are interested in the culture, and the more we value dancehall, the more we document, experiment with and claim what is ours. We can bring it to the world. It is better to write our own history,” Simms continued.

He encouraged Morris to submit an audition with a company called Ballet Créole in Canada. And Morris was successful. “I was there for two years. Then I transferred to another company called COBA.” COBA is the Collective of Black Artists focused on the African diaspora. Morris was with the company for five years in intense training. But there was still something missing. Settled in the Toronto-based company and travelling around the country to art shows and theatres was a dancer who missed the streets. So in 2013, he decided to teach it.

“The theatre world and the street world in Canada - it’s two different worlds. So I decided I wanted to go into the dance community and see what it’s like in Toronto. I would see dancehall there, and for me, personally, it’s not the dancehall that I know from Jamaica. They would fuse. I decided to bring my understanding of what the street dance is in Jamaica. Not to take anything away from any other instructors or dancers in Toronto, but it was lacking history, the culture.

He made the decision to educate the students on history, giving proper references to those who created the dance moves and talking more about the pioneers of dancehall. “It was more of a cultural experience. And at the time I was teaching, there weren’t any real dancehall classes happening in the city. There were street dances, but there weren’t any consistent dance classes. I wanted to be that person teaching dancehall classes consistently,” he shared.

His classes became popular, with 30 to 32 participants in three classes per week for four years. But that wasn’t enough. “I started to feel like I want to spread dancehall all over the country.”

He started travelling and met Judy Madarasz, a fellow dancer who would become his business partner. The pair made it to Vancouver, where they found no dance classes and decided to form a company focused on show production, hosting dance programmes and bringing international dancers from the African diaspora to Vancouver to share their experience through culture and dance.

He moved from Toronto to Vancouver where he is the artistic director of the dance company Ketch Di Vybz, and Madarasz is the marketing director. “Now, I’m consistently bringing people to Vancouver to teach dancehall and share their experience with the African Diaspora. And it doesn’t have to be dancehall. It could be soca, afrobeats, fusion. Anything that represents culture, we fly in people to share their experience.”

But how did he get into lecturing at university? Enter Dr Henry Daniel, a professor at the Simon Fraser University School for the Contemporary Arts, who wanted Morris to be part of the institution. “I sent in my résumé and was accepted. So I created the first dancehall curriculum in North America that’s based on dancehall and fundamentals of history in a university where students are being graded at the end of the semester.”

Morris said his learning came from years of experience and paying attention. “My circle allowed me to become smart. Passion made me humble. When you step out of Jamaican culture, or anywhere that is considered Third World, and you go into the First World, it’s different. You have to understand the system, or it will consume you,” he said.

Mikhail Morris knows that his is a success story. But there is still a way to go. “I have many more ideas, and I can have everything, just not all at once,” he said.