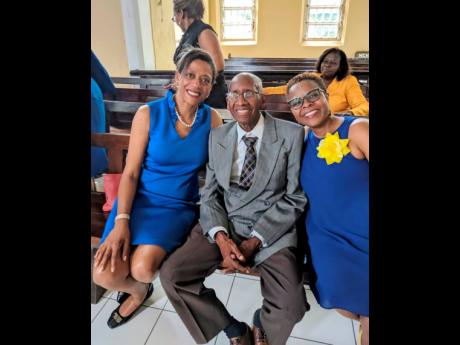 Contributed
Noel Dexter is flanked by (from left) Karen Barch and Donna Johnson-Scott at his last concert in May at the Port Antonio Methodist Church. 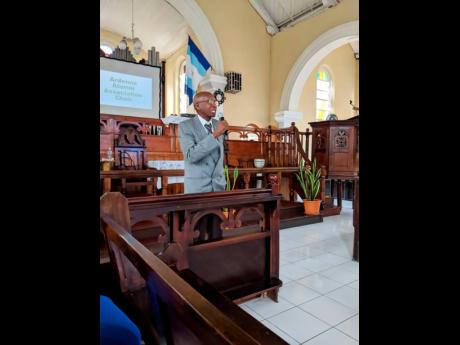 Extraordinarily talented and internationally respected composer, choir director, author and lecturer Noel George Dexter passed away on Sunday, leaving a void that many believe will be hard to fill.

Florence ‘Flo’ Darby, attorney-at-law and singer, who met Dexter while she was a student at Ardenne High School in St Andrew, told The Gleaner that she felt as if a member of her own family had died. “Noel Dexter taught me everything I knew about music, and he has been my mentor and teacher. It is as if a member of my family has died. I am extremely saddened by his passing and want to send my condolences to his daughter, Carol, and her family,” she said.

Darby, a former member of Ardenne’s choir, said that she was there when Dexter composed Psalm 150. “I was so awed by his talent. He was so so humble and gave freely of his time and talent. I sang in his first Youth Fellowship choir as well,” she added, ­explaining that many of Dexter’s students subsequently moved up to perform with the University Singers, based at The University of the West Indies, Mona, (UWI) which he also conducted.

Dexter, 80, died at his St Andrew residence Sunday morning after a brief illness.

Dexter wore many musical hats over a career that spanned several decades, and during that time, he played a lead role in fostering a deep and enduring love for Caribbean compositions of various genres.

Dexter was born in Port Antonio in 1938. He was educated at Titchfield High School in the parish and at The UWI, followed by studies in ethnomusicology and church music in the United Kingdom and the United States (US). His move from Portland to Kingston immediately impacted the music scene, and in 1962, he founded the Youth Fellowship Singers, which was later renamed the Kingston Singers. They presented memorable performances across Jamaica for over 25 years. Over the years, Dexter also provided musical direction for Jamaican theatrical productions.

After a brilliant teaching career at Ardenne High School, where he chiselled perhaps one of the most outstanding school choirs in the Caribbean, Dexter was appointed director of music at The UWI’s Mona campus, a post he held for 25 years. While at The UWI, he guided the University Singers to widespread critical acclaim in Jamaica and overseas with tour itineraries that took them across the Caribbean, as well as to the US, Canada, England and Germany.

While working with the Caribbean Conference of Churches in the 1970s, Dexter composed many hymns and anthems that are widely sung in churches today. The hymn The Right Hand of God, with words by Patrick Prescott of St Vincent, is considered the most popular hymn coming out of the English-speaking Caribbean, and it has been copied in a number of church hymnals around the world.

Among Dexter’s compositions and arrangements are the much-loved Psalm 150 , Born to Rule the World , I love A Jamaican Christmas , Come Thou Long Expected Jesus , Sing De Chorus, Clap Yuh Hand and Run, Come Quick. On the secular side, his arrangements and songs include Teacher Lick De Gyal , See it Ya , Wash Day , Duckonoo Life , and One Ting Lead to Another.

Dexter’s numerous awards, (Officer Class) for his work in the field of music, the Regional Ecumenical Award from the Caribbean Conference of Churches, the Pelican Award from the Guild of Graduates of The UWI, and the Silver Musgrave Award from the Institute of Jamaica.

His last performance as a conductor was at his home town family church, the Port Antonio Methodist Church, at the end of May this year at a reunion and tribute concert with voices he had groomed over the years at Ardenne High School. Dexter was predeceased by his wife, Beverley Aarons Dexter, and he is survived by daughter Carol Ann, a supporting vocalist who is now on tour with reggae artiste Buju Banton; son-in-law Rohan; and grandson Jahda, along with other relatives and friends.