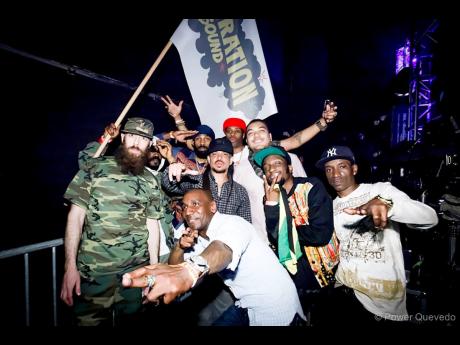 Red Bull is ready to take its biggest musical event to Jamaican soil, and The Sunday Gleaner caught up with one of the losers, who was happy to have participated in one of the brand’s epic Culture Clash face-offs.

Based in New York, Max Glazer is co-founder of Federation Sound (established in 1999), along with Kenny Meez and Cipha Sounds. After Cipha left to pursue his work with Funkmaster Flex’s Big Dawg Pitbulls, Kenny and Glazer continued on. Federation Sound competed in the Culture Clash on their home-turf in 2013.

“The clash we were at, it was the most fun I had losing. It was an incredibly enjoyable experience. I’ve been around several of them, and I always enjoy it,” Glazer said.

With the inclusion of the decibel reader, the clash requires an interactive audience, a touch that Glazer finds inviting.

“You can stream it as it happens, but the way to really experience it is to be in the room. The audience is part of the event. We’re getting further away from that element, because of how people listen to music individually - with YouTube, SoundCloud, etc. Putting it back into a communal experience is cool. It creates a different level of enjoyment and engagement,” he said.

Glazer anticipates that the clash in Kingston may be different from others staged in cities like Atlanta, London and Berlin. He is most interested in discovering if bringing the competition to Jamaican soil will encourage it to take on a more traditional form. “It’s reggae and dancehall fans in Jamaica.

But Jamaican musical listening tastes are so diverse, that all those styles fall well within everyone’s frame of reference. That’s how it feels to me,” he said.

He added, “It’s interesting because of the way they developed the concept of the traditional sound clash. But when it’s done internationally, there are four different styles of music. In New York, there are all these different, thriving, equally healthy music scenes. You’d have grime fans over there, hip-hop fans over here, reggae fans there,” Glazer told The Sunday Gleaner.

On Saturday, November 2, the brand will take over the National Arena for the always highly anticipated Red Bull Culture Clash. The contest, derived from Jamaica’s own sound-clash culture, takes on a more global approach. With a format that will have four stages, led by four crews. There are big digital clocks, for the teams to monitor during their timed sets. There will also be a decibel reader used to measure which group excites the audience into the loudest, most thunderous ‘pull-up’, ‘gun salute’, or ‘torch-blazing’ moments. The crew generating the most noise will walk away with the title Red Bull Culture Clash Champion.