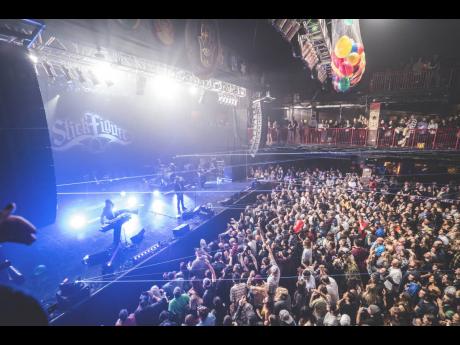 Jamaica is the birthplace of reggae music, but California has maintained a dominant space for the genre, with multiple annual roots and reggae music festivals that pull thousands of fans. The organisers regularly invite local stars like Chronixx, Protoje, or recently, Koffee, to grace their stages, however, the Jamaican-bred entertainers sometimes play second fiddle to West Coast-based acts. One such act is Stick Figure, Scott Woodruff’s one-man production unit whose albums consistently top the Billboard Reggae Chart with impressive numbers. The self-taught, multi-instrumentalist, who started playing as a hobby, recently knocked VP Records artiste Jah Cure’s latest Royal Soldier from the number-one spot with the release of his seventh album, World On Fire.

Perhaps the answer to why Stick Figure’s World On Fire can count over 10,000 copies sold in its debut week is because for Woodruff, playing reggae music didn’t feel like a choice. It was a natural mystic, a childhood hobby that grew into a career. “It was just what I loved to do. Once I started making music, it was just a hobby. I always thought I’d probably have a job and music would just be something that is part of my lif, but it turned into what I did every day, and I became fortunate enough to make a career out of it,” he told The Sunday Gleaner.

Woodruff grew up in a beach town on the south shore of Boston, Massachusetts, where reggae or Jamaican-influenced music was part of the lifestyle. As a pre-teen, while learning to play the drums, guitar, and keyboards, reggae music was the choice genre of the household. “That was the kind of music that was always around, so that’s what I learned to play. That’s what I used to enjoy the most. My older brother, who is very passionate about music, was always playing reggae music around the house like Bob Marley, Half Pint, Peter Tosh, Barrington Levy. that’s what inspired me to play reggae music. Reggae was just what we listened to,” he said.

The musical diet wasn’t strictly reggae music straight from ‘yaad’. Woodruff’s base on the West Coast exposed him to musical acts that saw success with infusing Jamaican musical elements into their own like Sublime from California, a ska-punk band whose sound is also described as ‘reggae rock’. “I grew up with Sublime, and Half Pint is one of their biggest influences. That’s how I learned about a lot of music from Jamaica early on,” Woodruff shared.

His early education paid off. Woodruff started recording music when he was 17 years old, and in 2006, released the first Stick Figure record, The Sound of My Addition, to critical acclaim. The follow-up records have similar reputations, with his sixth album, 2015’s Set in Stone, peaking at number 65 on the Billboard Top 200, number one on Heatseakers, number seven on Independent, and number one on the Reggae album charts. Stick Figure’s fifth album, Burial Ground, may ring extra-special if local listeners tune in. While that album debuted mostly original music, Stick Figure also covered Gregory Isaacs’ original, Hard Drugs, personalising it with his own upbeat twist. Burial Ground also samples Bob Marley’s ‘stiff-necked fools’ on the track Women of the Night, featuring Half Pint.

While he has yet to perform in Jamaica, he did visit the island to attend Reggae Sumfest over a decade ago.

“I went to Reggae Sumfest probably 15 years ago. That’s where I met Half Pint for the first time. And a few years later, he was on my record. We were fortunate to be able to play the California Roots festival this year, and we got to link with him. Jamaica is definitely a big part of why I play reggae music, for sure. Reggae all stems from Jamaica. It’s what influences me the most.”

As with all previous releases, Stick Figure’s World on Fire was written, produced, and recorded by Woodruff, this time at Stick Figure-owned Great Stone Studios in Oakland, California, the former home of American punk-rock band Green Day.