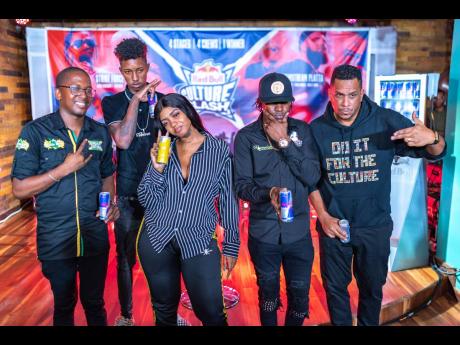 For the upcoming Red Bull Culture Clash, which will be hosted in Kingston, Jamaica, for the first time, the general consensus among the participants is that the event may turn out to be much more than just a clash. As the brand puts energy behind a concept derived from Jamaica’s sound system culture, an amalgam of artistes, producers, selectors, and sound systems will form four crews to pump up the volume for a long-awaited showdown. Exciting as the clash will be, supported by a star-studded roster at the National Arena on Saturday, November 2, the most scintillating element of the highly-anticipated event is that no one knows who will fly in to hit the stage as special guests to rep their crews. For this clash, it’s all about the surprises.

During the last week’s launch, hostess Khadine ‘Miss Kitty’ Hylton tried to pry some vital information out of the contenders, but clash competitor DJ Bambino would only say that everything depends on how the crews utilise their undisclosed clash budget.

In 2018 (Atlanta), Kranium and the Frequent Flyers crew won with special guests Mavado, Vanessa Bling, and Majah Hype. In 2016 (London), the clash was won by Team Mixpak, with special guests Popcaan, Spice, and Tony Matterhorn and included appearances by Stormzy and Joey Bada$$. In 2014 (London), Rebel Sound with David Rodigan featuring many, including Stone Love Movement.

Who are the Crews?

DJ Bambino was representing for the hip-hop heads - Do It For The Culture Crew. They are led by Salaam Remi, a Grammy award-winning producer known for work with Nas, Amy Winehouse, Fugees, Fergie and many others. Rounding out this crew are Spragga Benz, Jack Scorpio, Jah Snowcone, and Disco Neil. Holding the fort for soca will be the Riddimstream Platta Crew, led by Bajan producer, DJ, and announcer King Bubba. Other crew members include DJ Scratch Master, Kurt Riley, and DJ/MC Barrie Hype.

Two teams will represent for dancehall. The Strike Force Crew will be led by 4th Genna affiliate Govana and the sultry-voiced Jada Kingdom. Though Jada was a bit shy when put in the hot-seat, as the only female leader among the crews this year, the bodacious beauty came to life when called to the turntable for a preliminary challenge.

The Romeich Entertainment Crew will be led by dancing king Ding Dong, the Up-Top Boss Teejay, and Romeich himself. DJ Antsman and MC’s Badda Bling and Bishop Escobar represented the crew during the launch event. Though the crew will also comprise ZJ Chrome, ZJ Liquid, Bloodline Franco, Black Boi and Jade, there is no telling who else may grab the mic.

According to DJ Bambino, in this clash format, there will be no allowance for down-time. Owing to the freedom to invite superstar support, he believes that all four teams have the framework to keep vibes up all night. “At the end of the day, it’s really a show. I think this clash is more than what we see in Jamaica or at World Clash. It seems like a show to me,” he said.

Miss Kitty, who will also host the big day, told The Sunday Gleaner that she is proud and happy that Red Bull has finally chosen the island for the clash location. “This is monumental. Finally, they are here. But what I want from Jamaicans is to support our culture. What I find is that we try to step away from it while other people all over the world clamour for it. Now that Red Bull Culture Clash is here, I hope the crowd will come out and support the artistes and the crews,” she said.

MC Badda Bling echoed similar sentiments. “It needs to be seen, heard, and realised that sound system culture is Jamaican. We knew this [clash] has been going on for umpteen years, and it’s the first it’s embarked on the land of Jamaica. It’s better late than never. So we appreciate that them finally realise seh, ah yaad. Big up Red Bull!” he said.